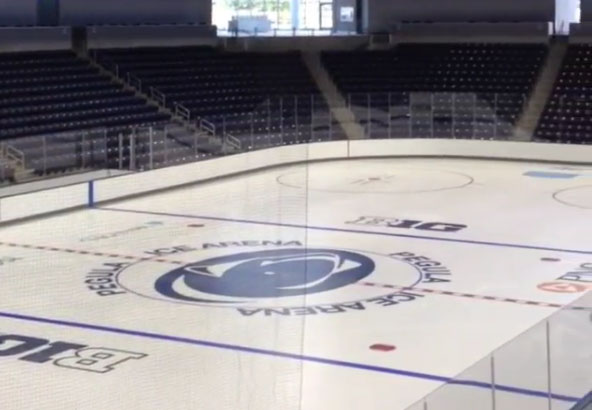 No individual embodies Penn State hockey like Joe Battista. As Associate Athletic Director for Ice Arena and Hockey Development, Battista knows the program inside and out. He played, coached, recruited, built it, even. The ?godfather? of the team, he?s been through it all. Legitimizing high-level hockey at Penn State has been a century-long struggle.

When fans get their first chance to see the 2013-14 Penn State men's hockey team at the brand-new Pegula Ice Arena the night of Friday, Oct. 4 in a free and open practice, all that will be a thing of the past. And when the puck drops against visiting Army at on Oct. 11, a new era will truly begin at Penn State as the Division I Nittany Lions enter their first season as members of the brand-new Big Ten Conference.

Backed financially by prominent alum Terry Pegula, Penn State?s birth on the Division I level has college hockey buzzing. And it wouldn?t have been possible without Battista.

?This truly is a dream of Joe?s and you?re reminded of that every day,? Penn State head coach Guy Gadowsky said. ?He works tirelessly, not because it?s his job, but because it?s his dream and that?s something I think is really infectious. It makes coming to the rink every day fun and meaningful. There are a lot of people here who have put in a lot of time and effort and love the game, and who are really excited to see it grow.?

Hopes for hockey at Penn State date before the NCAA?s inception in 1910. A student push to bring varsity hockey to State College began in 1909, when a student-run team competed independently for Penn State but failed to obtain university approval. In the late 1930s, hockey reemerged as a club sport and finally achieved varsity status in 1940 with financial support from the university. However, World War II brought complications-universities around the country cut back on athletic programming. The Penn State program was dropped in 1947, without the necessary funding or facilities to continue competing.

Hockey returned to State College in 1971, when a student-led petition with more than 3000 signatures prompted the creation of the club team. And for the next 40 years, the ?Icers? were dominant, compiling a 956-295-52 record (suffering only two losing seasons) and taking home seven American Collegiate Hockey Association national championships. But the sustained success was never enough for the university to back a Division I program.

?It always came back to money,? said Battista. ?It was always, we need a new arena, we need scholarships, we need not just a men?s but a women?s program [to make the jump]. There were a lot of disappointing times where it looked like we were close.?

Despite the continual setbacks, with Battista at the helm, the program grew. He skated for the Icers as a student from 1978-82, during which Greenberg Ice Pavilion was built, but a significant attempt at going D-1 was rejected. He saw that struggle firsthand.

?It was crushing at the time, because we certainly believed that hockey was a lot more popular than many other people believed it was,? Battista said. ?Hockey has really grown since them, and along with it the interest-especially with the [Pittsburgh] Penguins and the [Philadelphia] Flyers. It was always just, how is it that the state university of Pennsylvania doesn?t have a team??

After coaching at prep schools and working in the Penguins? front office, Battista returned to Penn State to coach the club team in 1987, and brought high-level knowledge and the wherewithal to build the program back with him. Over the next few years, he built an infrastructure of volunteer team support staff, from strength and conditioning coaches to video coordinators and even a team psychologist, amenities that many Division I programs didn?t have. Players received academic advising tailored to their needs, and Battista was able to convince many of them to pick Penn State over comparable Division III schools. There wasn?t NHL-caliber talent, but as a result there were fewer egos. A noted family-like atmosphere emerged within the program.

?We had the business side (a team of students worked to fund the program through ad sales) but there was a heavy reliance on volunteers,? said Geoff Martha, a member of the team from 1988-92 and former captain. ?They made a big commitment, and would only do that because they felt connected. We knew we weren?t Division I good. We chose to ignore it.?

Battista steered the Icers to the 1989 International Collegiate Hockey League championship, on their home ice in front of a standing-room only crowd at Greenberg Ice Pavillion. After switching conferences the next season, Penn State took home the 1990 ACHA title. Fans took notice, tickets began to sell out, and even in football-crazed State College, a following was born.

?It really was a turning point,? Martha said. ?We won on our home ice in ?89 and pulled in a strong fan base. We attracted more talent to the university. We followed it up in 1990 by winning as huge underdogs. There was some debate: traveling was a big budget commitment, because we didn?t think we were going to do that well. Then we ended up winning it, and the program just took off.?

Penn State went on to win ACHA titles in 1998, 2000, 2001, 2002, and 2003. The unprecedented success caught the eye of Terry Pegula, a Penn State alum and extremely successful businessman. Pegula and Battista had met at one of Penn State?s youth hockey camps back in 1989, which Pegula?s son Michael and several of his youth hockey teammates attended. More than a decade later, Pegula reached out to Battista.

?He wanted to know, ?Why aren?t we playing Minnesota, Michigan and Wisconsin? Why are we playing as a club team??? said Battista. ?At that time, I didn?t realize what a prominent alum he was. I learned pretty quickly.?

Pegula?s interest in backing the program was very real, and serious discussions began in 2005. A strategic development council that included Martha and other former players and people close to the program had worked for years toward that goal, and now had the resources to make it happen. After several years of discussion between Pegula, the council and the university, Pegula?s financial commitment in 2010-an initial gift of $88 million- marked the final step.

?During the 2000?s, the impatience started to come in,? Martha said. We had done this year in and year out, we were one of two or three teams at the university that funded itself, and yet it was frustrating because we?d raise the money on our own and it felt like the bar [to go D-1] just kept getting higher. We?d get to it, and they?d raise it. Finally, Mr. Pegula came in with such a huge gift that it couldn?t go any higher.?

The $88 million initial gift, which increased to $102 million over the next couple of years, funded scholarships to create both men?s and women?s programs as well as state-of-the-art Pegula Ice Arena. And Pegula and his wife, Kim, weren?t done. Just four months after the Penn State gift, they bought the NHL?s Buffalo Sabres and AHL?s Rochester Americans franchise. They later provided funding for a $123 million entertainment facility centered around two public rinks in Buffalo, making commitments to the sport at the professional, collegiate and grassroots levels.

Pegula Ice Arena, which opened Sept. 6, is a dual-rink facility that will become a center for not just hockey at Penn State, but throughout the community as part of Pegula?s vision. He sought not only a state-of-the art rink with top tier amenities for fans and athletes, but also the opportunity to make a wider mark for hockey.

?Certainly we hope it will have a drastic impact on the sport and the state of Pennsylvania in terms of attracting better athletes to give hockey a try,? said Battista. ?We?re going to host the high school playoffs here, we?ll be hosting USA hockey functions. We?re also going to play some AHL exhibitions here, maybe even a regulation game. Our goal in the next five years is to play an outdoor classic at Beaver Stadium. All of us believe we?ll be able to not only be competitive in the Big Ten but on the national level as well.?

It all started with Battista and the Icers.

?I don?t think we would have been here if it wasn?t for the success of the club program,? Gadowsky said. ?There?s already a significant hockey following here and a big part of that is they?ve had great people, great success and great students. There was a program in place that already fostered a lot of pride in the university, and I think that?s a huge prerequisite.?

Editor?s note: Jeremy Woo is a special contributor to BTN.com who spent the summer reporting and writing on the inaugural Big Ten men?s hockey season.