Monday links: Hackenberg, others over Miller? 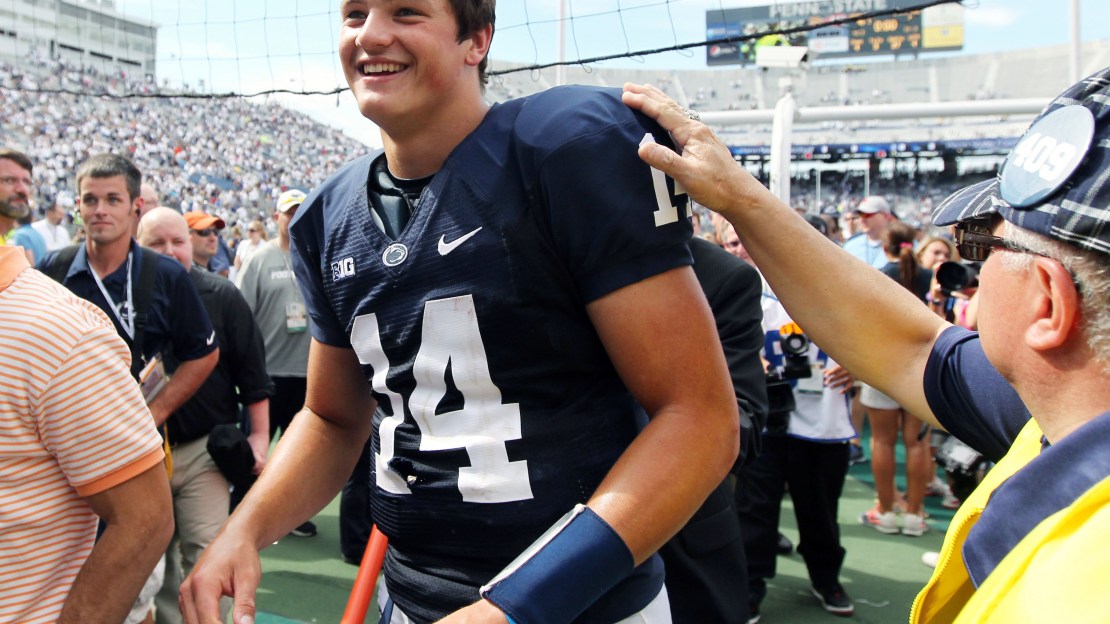 Good Monday morning, America! Grab your Big Gulp and something under the heat lamp on a roller. There?s a lot to get through today and this week.

Jones thinks the entire concept of building an offense around any version of the zone-option-read with a quarterback running planned keepers or semi-designed ?scrambles? 15-20 times a game is a dying strategy. And I think I?ll be borne out on this during the remainder of the decade.

It all comes back to this: A good quarterback who understands coverages, recognizes mismatches, decides quickly and throws accurately is so important a piece of your team that you cannot put him at undue risk.

The gang at HawkCentral.com wonders if it?s too early for Iowa to talk bowl.

Of course it isn?t. The Hawkeyes have won four games in a row and appear to be getting better, playing vintage Kirk Ferentz football behind a developing quarterback in Jake Rudock.

Many felt the Wisconsin at Ohio State game was a de facto Leaders Division title game. I did. And so did Tom Oates of Madision.com.

The Buckeyes simply were bigger, faster and stronger than the Badgers. No shame in that. Now, the question can be asked: Is any Big Ten team up for tackling Ohio State? I don?t think so.

Wisconsin-Ohio State have developed a nice rivalry the last 10-15 years. Bob Hunter of the Columbus Dispatch says it?s too bad they won?t play often in coming years with each headed to opposite division in Big Ten realignment that?s coming in 2014.

"I was here a long time ago, and it was not a rivalry," Urban Meyer said, this week. "But you have to give credit to Wisconsin. I think it all started with Coach (Barry) Alvarez, and then the following coaches have done a great job. So it's one of, if not the best program in the Big Ten right now."

Yes, the Wisconsin-Ohio State rivalry will be a casualty, but it?s worth it to have the geographical alignment of the new divisions in 2014.

Purdue pulled quarterback Rob Henry on Saturday and inserted true freshman Danny Etling. Does this mean Etling is the new No. 1?

I sure hope so. What?s the point in sticking with Henry, a senior who was miscast as a quarterback the day he arrived on campus (he?s a safety)? This team isn?t going anywhere. Let Etling learn on the job and build toward 2014.

Michigan?s biggest questions coming out of a bye: Devin Gardner and an ability to make plays on defense.

I also wonder about the team?s mind-set coming off two narrow wins over less-than-power teams in Akron and UConn.

Michigan State was off last week. But it?s game on this Saturday with a huge visit to Iowa in what will tell us a lot about the Spartans? ability to compete in the Legends Division. Which MSU players? stock is up? Which is down? I love this feature by Mike Griffith of Mlive.com.

This is the most interesting player whose stock is down:

Quarterback Damion Terry: How can this be so when he's just a true freshman? Well, Terry is obviously not just any true freshman, and the expectations skyrocketed after his 10-of-14 passing, 240-yard, three-touchdown scrimmage. Coach Mark Dantonio has worked Terry with the first team in the fall camp, and again on two occasions in the regular season. Either Terry is struggling to pick up the system, or the system is too complex. Either way, it's bewildering Dantonio would work him so much with the first team and then not use him when the QB position has sputtered.

Mlive.com has some good info on why Alabama canceled its two-game series with Michigan State.

Nebraska was off last week. But Bo Pelini had his maligned defense on his mind.

Sam McKewon of Omaha.com has some great analysis here on the defense?s slide since 2009, specifically vs. the run. Pelini and defensive coordinator John Papuchis had a bye week to teach, tinker and tell it like it is. Will the extra time pay dividends? I have my doubts. I tend to think a month into the season, a team basically is what it is. Improvements can be made, but I doubt they will be radical.

There was much to like about Illinois? 50-14 win over Miami (Ohio). One of the things was the use of true freshman quarterback Aaron Bailey, a dynamic athlete. Well, it looks like we?ll be seeing more of the talented youngster is coming games. I can?t wait.

Some wonder if Minnesota coach Jerry Kill made the right call in sticking with quarterback Philip Nelson during Saturday?s loss to Iowa. But Kill thinks he handled things properly.

"Maybe Mitch would have went in there and changed the whole game and lit it up, I don?t know," Kill said. "But that?s the decision we make. Whether it?s right or wrong, that?s what we get paid to do, and I guess it wasn?t right yesterday. And could we have changed? Should we? Yeah, you can say we could have done a lot of things because we didn?t win the game.

I don?t know if it would have made a difference who Minnesota played. I think Philip Nelson and Mitch Leidner essentially are the same quarterback. And, alas, Kill sees no QB controversy.

Penn State pitched a shutout vs. Kent State after getting ripped by Central Florida. Now coming off a bye week, the Nittany Lions have a trip to Indiana to play an explosive Hoosiers offense. This should be a nice test for the PSU defense.

Fun to see a bunch of Sooner fans in Midway Airport as they head home from Notre Dame. Maybe OU liked area enough to join #bigten.

Ohio State threw only 17 TD passes all of last season. They have 19 this year. On pace to shatter the program?s season record of 33 in 1995.

Third straight week Michigan has dropped in the polls even though it hasn't lost. Only second time in school history that has happened.

RB Silas Redd will be on head coach No. 5 now. Looks like Penn State's situation with sanctions was more stable but who would've guessed it?

SEC has had 11 league games already. B1G has had 3. One revs up the anticipation and excitement, the other ? doesn't.

My take: More league games in September are coming, I believe.

Chris Borland is tied for 18th in the nation with 46 tackles. #Badgers

My take: Seems like he already has 2,123 tackles this season.

Not sure what's the plan moving forward based on today's conversation with Kill. You'd think he'd play two QBs. But too early to predict.

My take: I?d give Philip Nelson a bit more time. But that?s just me.

ESPN just made note of @DrewBrees being last QB to beat Nick Saban twice in a row. #Purdue beat Mich St in '98 and '99. Tiller 3-0 vs Saban

My take: I don?t know what to make of this.