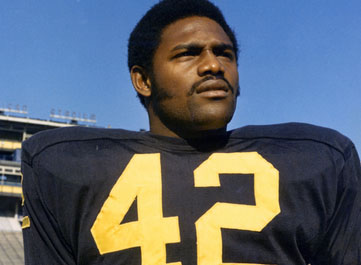 "Perseverance: The Story of Dr. Billy Taylor" is a powerful new documentary exploring the life of one of Michigan?s greatest running backs. The show airs Monday night at 9:30 p.m. ET following a re-air of the Michigan-Notre Dame game on BTN/BTN2Go. The film highlights Taylor?s college glories but also explores the setbacks that destroyed his reputation and set him on a 25-year roller coaster ride to recover it. See a preview of it in this post.

Taylor had seemingly turned the corner to greatness when he finished his football career at the Michigan in 1971. Named to the All-American Team for the third consecutive season and the Big Ten?s Most Valuable Player, he left as the school's all-time leading rusher. The powerful, compact runner with enough speed to bounce outside looked like a lock for the NFL, and he made plans for a football career. He even planned to pursue a doctorate degree.

But a few days after his final college game, the 1972 Rose Bowl, Taylor's mother died unexpectedly. It would be the first of four tragedies in Taylor?s life that pushed him into an emotional tailspin . Instead of finding fame in the professional game, Taylor discovered depression, alcohol and drugs. "Perseverance: The Story of Dr. Billy Taylor" tells that story and more.

Learn more about this documentary at www.perseverancefilm.com.