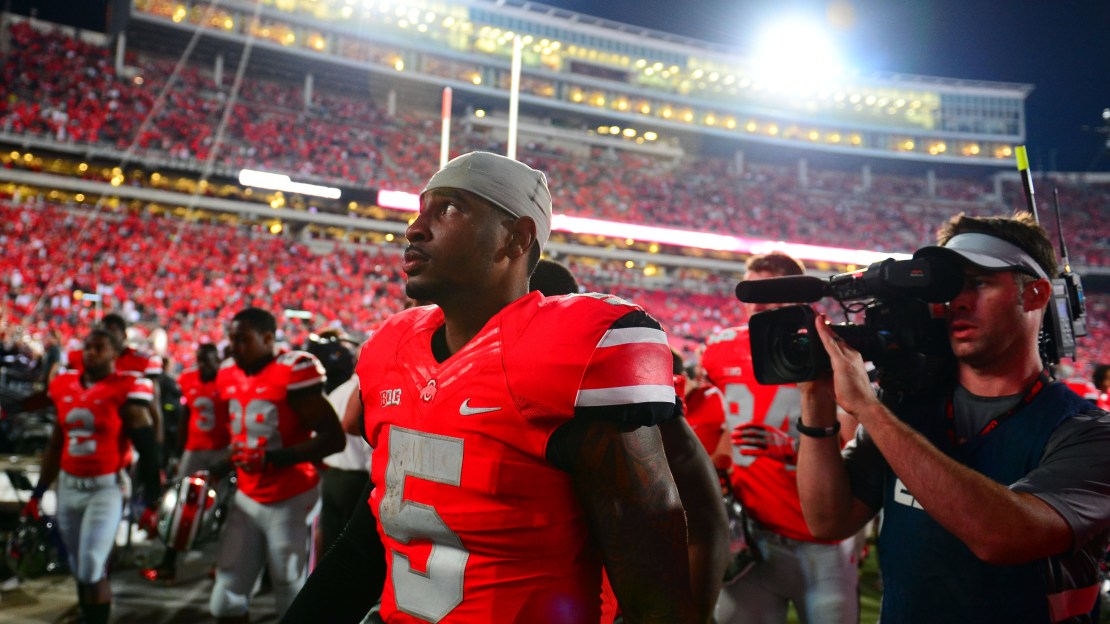 How good is Ohio State? The question was posed, oh, at least 14,328 times since the start of the season.

The Buckeyes went 12-0 in 2012, the school?s first under Urban Meyer. Alas, NCAA probation kept the Buckeyes from competing for the Big Ten championship or going to the postseason. So, America never got to see if Ohio State was national title caliber.

But now, unencumbered by sanctions, Ohio State?s possibilities are endless. And, after tonight?s 31-24 win over Wisconsin, the Buckeyes can begin to dream big. Really big.

The Buckeyes also wanted to send a message tonight. Wisconsin has what Ohio State wants-Big Ten supremacy. The Badgers have won the last three Big Ten titles, a province that once belonged to the Buckeyes. From 2005-2009, Ohio State won the Big Ten. OSU was kings of the Big Ten. And, the Buckeyes want their throne back. Well, Ohio State took a big step toward reaching that goal tonight.

Ohio State quarterback Braxton Miller also took a big step, showing that he still is one of the nation?s most dangerous players.

"I've been working really hard this last couple weeks because I've been hurt, fundamental-wise," Miller said. "I felt pretty good. My leg felt good, energy-wise. I wasn't out of shape."

The junior hadn?t played since the first series of the second game of the season, vs. San Diego State on Sept. 7, when he went down with a strained MCL in his left knee. He then missed the next two games, at Cal and vs. Florida A&M. Kenny Guiton stepped in and excelled in leading the Buckeyes to victory each game.

No doubt, Guiton is good. But he lacks the pure explosive danger of Miller, who continues to emerge as a passer.

It didn?t look like Miller had missed any time on this night. He was on the mark most of the game, hitting 17-of-25 passes for 198 yards with four touchdowns and no picks. Miller also ran a team-high 22 times for 83 yards. Nifty numbers for a guy who many felt would be out of synch after the layoff.

[ MORE: Did you see this photobomb of LeBron James on Ohio State sideline? ]

The Buckeyes opened the season with four relatively easy wins, dumping Buffalo, San Diego State, Cal and Florida A&M. But, no one really knew how good this team was after playing four relatively overmatched foes. Was No. 4 Ohio State ready for No. 23 Wisconsin, arguably the second-best team in the Big Ten?

The Buckeyes had control throughout this tilt, getting equal parts offense and equal parts defense to seal off this very good Wisconsin team that?s led by first-year coach Gary Andersen, a former assistant of Meyer's at Utah.

Ohio State had 390 yards of offense, showing balance with 198 yards rushing and 192 yards passing. But one of the biggest numbers was 0, as in zero turnovers.

Gordon had 74 yards on15 carries before leaving the game dinged up. James White had 31 yards on eight totes. No doubt, these guys weren?t playing UMass, Tennessee Tech or Purdue. Ohio State was an entirely different level of opponent. The Badgers knew rushing yards could be at a premium, so quarterback Joel Stave would need a big game. He had his moments in hitting 20-of-34 passes for 295 yards with two touchdowns and an interception. But, it wasn?t enough.

This game in many respects was a de facto Leaders Division championship game. Ohio State?s win puts it in good position to win the division. Penn State is on probation and ineligible. Illinois looks improved and could be a threat but probably is a work-in-progress. Indiana? Purdue? No. No.

Now, the stakes get bigger next Saturday for OSU, when the Buckeyes play at 4-0 Northwestern in what could be a preview of the Big Ten title game. This will be one of the biggest games in NU history, with a packed Ryan Field and prime-time national television audience peering in.

The Northwestern offense led by the two-headed quarterback tandem of Kain Colter and Trevor Siemian will pose issues. And there are myriad weapons at receiver and running back, along with a strong line. It will test the Ohio State defense even more than it was tested tonight. But can the Wildcat defense slow down this powerful Buckeye offense?

If Ohio State escapes Northwestern with a win, it doesn?t figure to really be tested again until the season finale at Michigan. Then would come the Big Ten championship.

Until then, though, Ohio State must continue to hone its team. The Buckeyes need to snug up their pass defense and get a bit more explosive in the running game. And can Miller continue to carry such a big load, given his penchant for getting hurt? Guiton was supposed to play tonight but didn?t. Will we see him in coming weeks to give Miller a blow?

"I'm proud of Kenny, the way he stepped in," said Miller. "I look at him as a big brother."

?It?s a great win. It gives us a lot of momentum going in to next week," said OSU linebacker Joshua Perry. "We have another ranked opponent, it?s on the road and we have a week to prepare. Having a win like this is a great way to enter a week of preparation.?