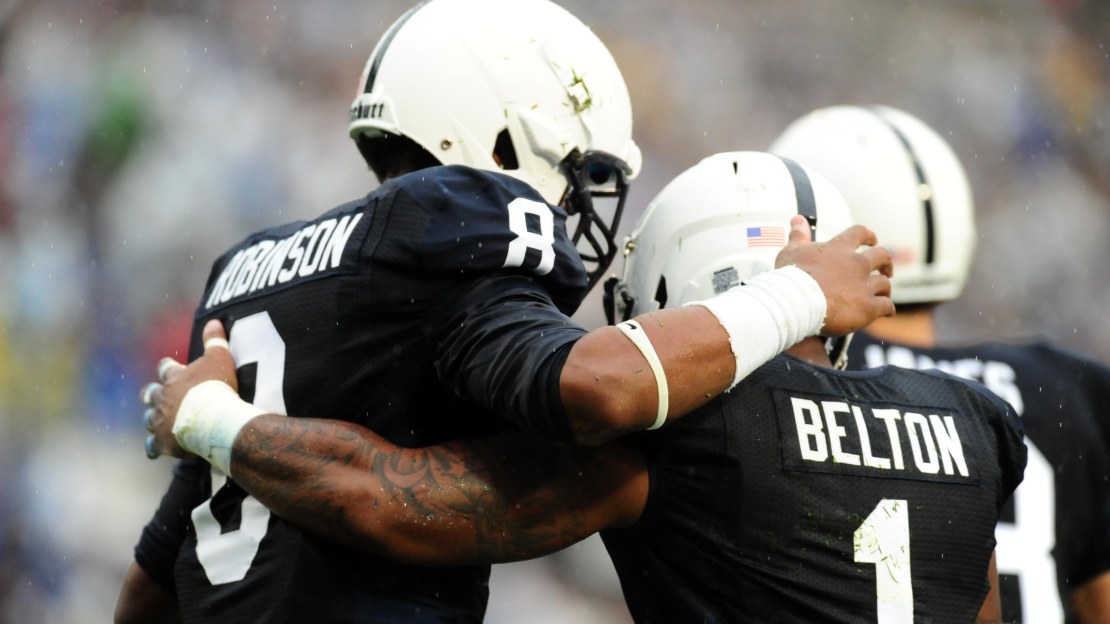 It wasn?t long ago when many felt Penn State would be an afterthought for a decade after severe NCAA sanctions were handed down. Well, news that the NCAA was going to ease scholarship limitations initially in place as part of penalties for the Jerry Sandusky scandal means that notion already may be antiquated.

"We're happy right now for our players, our student-athletes that are here and our football program," Bill O?Brien said. "They're a resilient bunch of kids.

"We're happy for our people here at Penn State and the people that have worked extremely hard to implement the recommendations of the Freeh report. We're just trying to take it one day at a time and working as hard as we can and continuing every single day to try to do the right thing."

The possibilities at Penn State now seem much better in the short- and long-term. Amazing how these circumstances have changed so quickly.

The bye week couldn?t have come at a better time for Michigan, which is one of six Big Ten teams off this Saturday. Yes, the Wolverines are 4-0. But, they have issues to iron out, specifically on offense. And one of the biggest is on the line, which has struggled to get a consistent push.

Mary Snyder of the Detroit Free Press says the most scrutinized spot during the off week will be the interior of the offensive line, which has been inconsistent with first-year starters Graham Glasgow and Kyle Kalis at guard and Jack Miller at center.

?The three guys in the middle of the offense line we?ll always look at,? said Brady Hoke. ?There are guys in there that have played well, but there?s great competition behind them, so if a guy has a good practice or a good couple days, you may move him up.?

Keep an eye on the center spot, which could under scrutiny. Sounds like Glasgow could move to the pivot-if an adequate replacement can be found for him at guard.

More Michigan: If you?re hoping to see linebacker Jake Ryan in the Big Ten opener vs. Minnesota on Oct. 5, don?t hold your breath. It likely won?t happen. But he should be back in October at some point, says Hoke.

Honestly, the Michigan defense has played well sans Ryan, arguably the best player on the unit.

Oller points out that entering the season, losing Miller to injury was Ohio State?s worst-case scenario. So the idea was to limit his runs, which in reality limits OSU?s effectiveness. But now, with the assurance that super sub Kenny Guiton can win games, too - mostly by distributing the ball to multiple offensive weapons - Urban Meyer can take full advantage of Miller?s running skills without worrying that losing him would cost Ohio State the season.

So far, so good for Iowa quarterback Jake Rudock, whose numbers stack up well with other recent Hawkeye quarterbacks.

Is it possible Rudock would have been even better in his first four games had he taken a few snaps last year? We?ll never know. That was Kirk Ferentz?s call in 2012, and it?s in the past. A more pertinent and present question: Is Rudock ready for the Big Ten? A trip to Minnesota this Saturday will be revealing.

And this new-found strength was apparent in the Hawkeyes? win last week vs. Western Michigan. Don?t discount the special teams, as they could be the difference between a bowl or no bowl for Iowa. No doubt, the hiring of Chris White in the offseason from the NFL to coach special teams has helped.

Great work by Dave Heller of FOXSports Wisconsin, who has broken down how Wisconsin has run and passed all season.

As for passing, will the Badgers ever find a complement to wideout Jared Abbrederis?

The questions persist: What can Michigan State coach Mark Dantonio do to improve the Spartan offense?

Mike Griffith of Mlive.com says the offensive line and running game look fine. It comes down to passing, and it involves quarterbacks, receivers, schemes, play calls . So exactly what will it take for Michigan State to get its offense up to speed for an Oct. 5 tilt at Iowa after this bye week? Click here.

I?m interested by Griffith?s thoughts on not totally buying into Connor Cook at quarterback and taking the redshirt off Damion Terry. This quarterback issue looks far from resolved.

Fuller points out that just two years ago, Mitch Leidner was a pocket passer at Lakeville South High School who had just one scholarship offer from a BCS program. Now the Minnesota redshirt freshman is a starter in a read-option offense who tied a school quarterback record set in 1967 with four rushing touchdowns in last weekend's 43-24 win over San Jose State.

If Purdue hopes to make any progress on offense, it must begin up front with a line that hasn?t been consistent.

New Illinois offensive coordinator Bill Cubit is turning quarterback Nathan Scheelhaase loose. And, it?s a beautiful thing, as Scheelhaase has thrived because of that confidence in him.

?Nate has done a nice job,? Cubit said. ?You can see we don?t look over to the sideline for calls. Nate?s running it. We teach them defenses and we teach them how to attack defenses.

?It?s helped that we?re really disciplined at the wideout position now with guys being in the right spot at the right time. (Receivers coach) Mike (Bellamy) has done a really good job getting those kids going.?

Bo says defensive players were "embarrassed" with how they played against SDSU.

My take: Will the defensive issues ever get fixed?

With the Penn State decision, the #B1G divisions just got more lopsided. Nittany Lions could be really good in about 3 yrs if O'Brien stays

Lewan on win at UConn: It was key that we fought through adversity. I was more proud than upset.

My take: Well, Michigan fought through adversity vs. Akron, too, but Lewan wasn?t so happy about that.

My take: This is fascinating.

Ferentz says Oline and Dline remain a work in progress.

My take: The Iowa offensive line? A work in progress? Not sure about that. It seems pretty good to me right now.

Matt McGloin on Joe Paterno's vacated wins: "Let him get his wins back. He deserves it." #PennState

My take: I think this is one aspect of the Penn State sanctions that never may change.

My take: This is delicious.

My take: Too bad Purdue doesn?t have Florida State?s personnel.