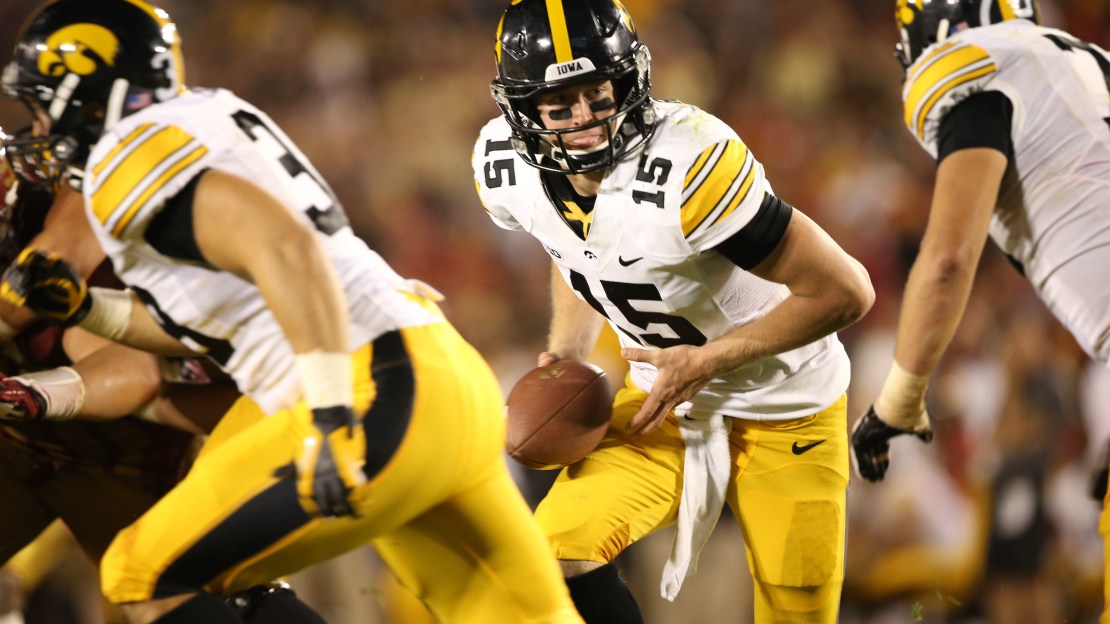 Coming off a 4-8 season, Iowa faced many questions as 2013 dawned. One of the biggest: Who would play quarterback with James Vandenberg gone? Jake Rudock emerged from a three-man battle in training camp. And the Hawkeyes haven?t looked back in forging a 3-1 start.

The 6-3, 205-pound sophomore from Weston, Fla., arrived in Iowa City in 2011 and redshirted. He then sat and watched last season, as the Hawkeye offense struggled to find a groove under first-year coordinator Greg Davis. But so far this fall, Iowa?s offense has looked much better.

Yes, the Hawkeyes are relying on a strong rushing game that ranks sixth in the Big Ten (244 ypg) behind backs like Mark Weisman, Damon Bullock and Jordan Canzeri. Meanwhile, the passing game is eighth (199.2 ypg) in the conference. Overall, Iowa?s offense is seventh (443.2 ypg) and ninth in scoring (35.2 ppg).

I caught up with Rudock as he prepped for Iowa?s Big Ten opener at Minnesota on Saturday in a battle for the Floyd of Rosedale Trophy.

Q: What have been some of your keys to success early on?
A: Definitely the offensive line, running game and receivers. The line has given me time to see guys get open. The receivers have done a heck of job finding those creases, finding those open areas on the field. Mark Weisman, Damon Bullock, Jordan Canzeri ? all of our backs have been doing a very good job of seeing the holes the line is creating. That takes off added pressure and you can focus on what you need to do to help the team win.

Q: What did you learn while watching James Vandenberg last year?
A: I learned from his demeanor. No matter how a game ended, he was always positive at the end of the game, saying we had work to do and needed to keep going. I also noticed his studying off the field, too. He did a lot of film work. He knew the defense as well as they did at times. I helped me understand the commitment you need to put in. He really instilled that and passed it down to me.

Q: How much time do you spend watching film each week?
A: A lot. Putting it in numerical value would be really hard to do.

Q: Who was your favorite quarterback growing up?
A: When I was really young, it was Dan Marino. Dan the Man. He could throw the ball. He could put it in some tight spots. He also could be accurate and ask you which ear hole you wanted him to hit. Growing up, I thought that was really cool.

Q: Are there any quarterbacks you would compare yourself to style-wise in college or the NFL?
A: No, not a chance. I can?t compare myself (to the NFL guys). That?s how I was brought up. Those guys are in a league of their own. And the senior quarterbacks in college, they are on their own level. I?m just trying to do my best job to help my team win.

Q: What?s your relationship like with your linemen?
A: We hang out. We have training table. We?ll sit together and talk and give each other crap. Just some guy talk back and forth, raging on each other. It?s all in good fun.

Q: What did you learn from that late interception vs. Northern Illinois in the opener?
A: I knew the coverage pre-snap and thought I could get it in there, and I really just threw a bad ball. The timing of it was unfortunate, especially giving them such good field position. I need to understand things are gonna get tighter at that late point in a game. The defensive backs may be jumping routes.

Q: Is there any one you use as a confidant?
A: Once in a while I?ll talk to my old high school coach, Coach (George) Smith at St. Thomas Aquinas. I also talk to my old quarterback coach. He?ll watch some film and see some things on other teams and give me a little head?s up on things sometimes.

Q: Like what?
A: Which DBs are playing, how they are playing, what style they play, if they are better at bump-and-run or giving a cushion and breaking on the ball. Little things like that, which help.

Q: Was there ever a point in camp when you thought you had a leg up on the job?
A: All of us in camp had the mind-set that we had to play like we were the starter. I don?t think there was a point in time when I knew, so much as me telling myself to take it a day at a time and focus on the day at hand. Don?t think of something you can?t envision.

Q: What did you think when you were told you would start?
A: I was happy. All the hard work had paid off. I had done enough. It was an honor to play for Hawks, to step on the field with my teammates and do what I wanted to do with my guys.

Q: Where would you take someone to eat in Iowa City after a game?
A: It depends on what you want. If you want a burger, go to Short?s. If you want good general food, probably The Airliner. Wig and Pen has really good pizza.