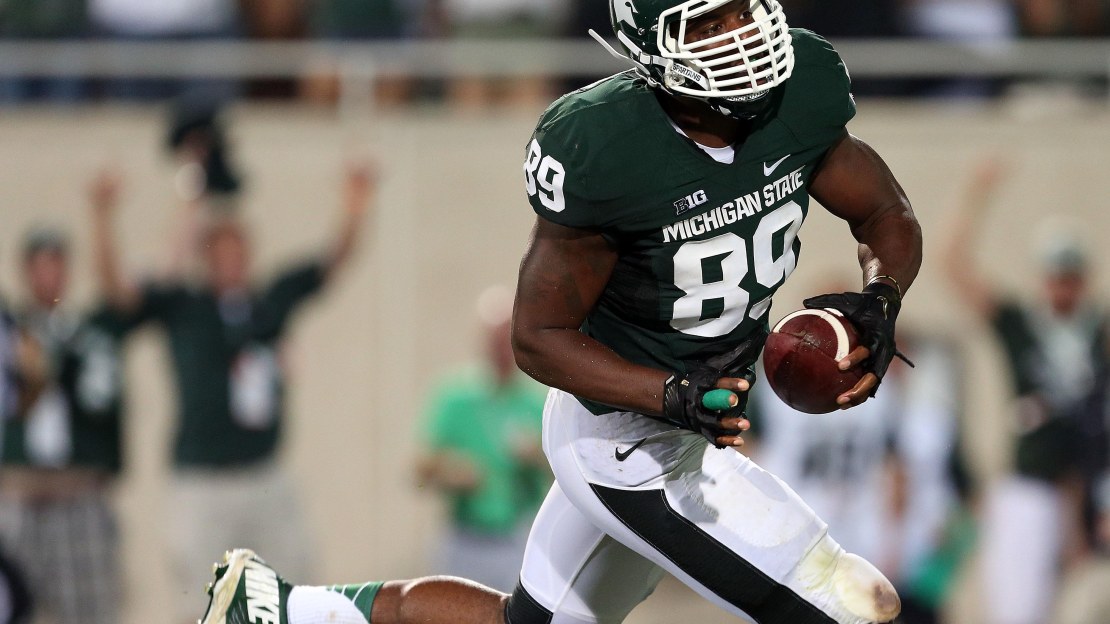 We have reached the one-third mark of the 2013 season. Where has the time gone? Last time I looked up from my keyboard, the kids still were splashing in the neighborhood swimming pool and the Cubs were eliminated from playoff contention. Wait, that last item happened back in June. Forget it. You get the point.

Four weeks of the 2013 season are in the rearview mirror, as we head into the heart of conference play with only three non-leagues left: Northern Illinois at Purdue; Miami (Ohio) at Illinois; BYU at Wisconsin.

Here is my one-third report.

Top defensive player: Shilique Calhoun, E, Michigan State. The guy has been a beast replacing William Gholston. Calhoun leads the team with eight quarterback hurries and is tied for the team lead with two sacks (12 yards) and three tackles for loss (15 yards). Even better, he has scored three touchdowns, scoring twice on fumble recoveries and an interception. Heck, at one point this year, Calhoun was outscoring the MSU offense.

Most surprising player: Nathan Scheelhaase, QB, Illinois. He had endured an up-and-down career in Champaign, dealing with constant tumult in the form of coaching staff turnover. But the senior is saving his best for last, as he?s excelling as the general of new coordinator Bill Cubit?s quick-strike passing game. Scheelhaase has hit 64 percent of his passes for 884 yards with seven touchdowns and just two picks-in three games.

Most disappointing player: Andrew Maxwell, QB, Michigan State. It was thought his second season as a starter who bring marked improvement. Nope. Four weeks into the season, he was out of a job, as Connor Cook has taken over. Who knows? Maxwell could remerge at some point if the MSU offense continues to sputter.

Coach of the year: Jerry Kill, Minnesota. Yes, you can makes good cases for Ohio State?s Urban Meyer, Northwestern?s Pat Fitzgerald, Illinois? Tim Beckman and Iowa?s Kirk Ferentz. But I?m going with Kill, whose Gophers are 4-0. And they?ve been resourceful, scoring on defense and special teams while also overcoming injuries at quarterback and running back as well as a seizure by Kill.

Assistant coach of the year: Bill Cubit, Illinois. I wanted to go with Michigan State defensive coordinator Pat Narduzzi, but Cubit is the choice. I shudder to think where the Fighting Illini would be without Cubit, who was hired by Tim Beckman after he was fired as head coach of Western Michigan. Cubit has breathed life into what was a dismal Illini offense, thus breathing life-and hope–into a struggling a program. The short-passing game has been a stroke of genius.

True freshman of the year: Christian Hackenberg, QB, Penn State. If only every question in life was this simple. The kid arrived with a fat scrapbook and has lived up to every clipping in it, hitting 62.2 percent of his passes for 1,027 yards with five touchdowns and four interceptions. Even better, the Nittany Lions are 3-1. How good is Hackenberg gonna be?

Key injury: Braxton Miller, QB, Ohio State. Early in the second game of the year-vs. San Diego State-Miller strained the MCL in his left knee. Ohio State fans gasped. But, they shouldn?t have. Kenny Guiton came on and promptly led the Buckeyes to victory that day. He has started-and excelled-the last two games, as OSU is soaring. When Miller returns, he will start-according to Urban Meyer. But Meyer also says Guiton will play. Interesting.

Most surprising team: Iowa. Yes, seeing Illinois at 2-1 is a surprise. But, how many of you had the Hawkeyes at 3-1? Not many. And Iowa is <thisclose> to being 4-0, if not for that horrid late-game interception vs. Northern Illinois in the opener tossed by Jake Rudock in his first career start.

Most disappointing team: Nebraska. You could say Michigan or Indiana and be correct. But the Cornhuskers get the nod. The defense has been mostly awful, while the offense has lacked consistency after entering 2013 amid great hype. It was all perfectly encapsulated in the horrifying 41-21 home loss to UCLA. Throw in a heaping dose of controversy complements of the ?Pelini Tape,? and, well, it has been a bumpy start to 2013 in Lincoln.

Best game: From an excitement/watch-ability standpoint, Wisconsin?s 32-30 loss at Arizona State was great entertainment. There was over 900 yards of offense in a close game, as the teams combined for three first quarter points before combining for 59 the rest of the way. Sprinkle in a whacky ending that no one soon will forget and you having the makings of a classic-sort of.

Worst game: Hey, I have to go back to the Badger-ASU tilt. The botched ending to Wisconsin?s 32-30 loss at Arizona State takes the cake. I?m still speechless that officials at this level of the sport could let a game end like that.

Best non-conference win: Honestly, there wasn?t one. But, if my bosses are gonna force me to pick one, I?ll go with Michigan?s 41-30 victory over Notre Dame. But, golly, what a difference a couple of weeks make, huh?