#BTNLive asks: Who had best performance? 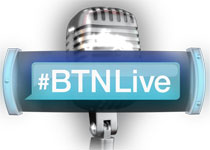 If you're on Twitter, you can vote in our ongoing series of Big Ten Twitter polls for our weekday TV show #BTNLive weekdays at 6 p.m. ET. On tonight's #BTNLive show, our experts discuss this question: Who had the most impressive performance on Saturday? Four possible answers: B.J. Lowery (#BTNLowery), Kevonte Martin-Manley (#BTNKMM), Mitch Leidner (#BTNLeidner), Kenny Guiton (#BTNGuiton).

Also tonight, our panel breaks down all of Saturday's Big Ten action and discusses whether or not there should be true concern for 4-0 Michigan? Wisconsin's star running back duo Melvin Gordon and James White talk with the guys about their incredible start to the season and show them a few dance moves too. Plus, Big Ten freshman of the week Minnesota QB Mitch Leidner tells us about his four-touchdown  performance in his first career start. Plus, Howard Griffith and Glen Mason give their weekly power rankings and answer fans tweets.

Select your choice below and tweet out your vote. We'll be tabulating the hashtag totals all day and throughout the show. The hashtags are: