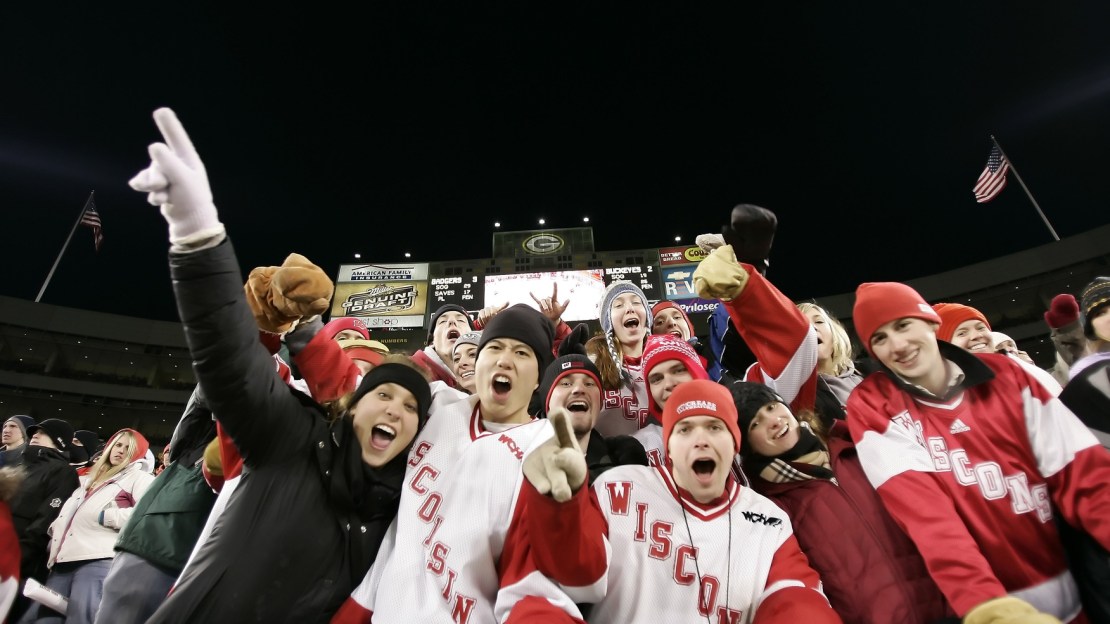 It?s tough to find an individual more emblematic of Wisconsin hockey than Mike Eaves. The Badgers? head coach, all-time leading scorer, 1977 national champion and head coach of the 2006 title team has been around for it all. From the earliest days of Big Ten hockey, where informal standings were kept between schools and a trophy given out for the best record (there weren?t enough teams for a Big Ten conference) to the emergence of the new Big Ten, as a player and coach, Eaves? knowledge bridges that gap.

Big Ten Hockey Media Day was Thursday, Sept. 19 in St. Paul, Minn. (see more videos here), but BTN caught up with Eaves earlier this summer to get his thoughts on the new Big Ten and the upcoming season.

Q: What changes do you expect from having Big Ten competition?
A: It?s amazing. I think for the average student here at Wisconsin, they don?t know a lot about hockey. But they?re certainly going to know the fact that Michigan State, Michigan, Ohio State are in the Big Ten. I think there will be an increase [in interest]- if you?re just a casual fan of hockey but you know that Penn State?s in town, you?ll say ?hey, let?s go watch Penn State and Wisconsin play Big Ten hockey tonight.?

I think there?ll be an advent of higher interest on the part of the casual fan that?s out there, and that?ll draw them in to see Big Ten hockey. The whole university always gets a little bit of buzz when Michigan is in town, Michigan State, Ohio State- it?s a Big Ten opponent, the whole excitement. We play them in football, we play them in basketball, now we have them in hockey and we?re going to play them four times a year. It?s pretty cool.

Q: What are the biggest benefits of having a true Big Ten conference?
A: Right now, I think the thing that?s most tangible for us as coaches is the fact that being in the Big Ten will give us a stronger voice in the NCAA, as far as the sport. In my tenure here, we?ve been somewhat frustrated that football and basketball get changes and we get lumped in with the other sports.

The fact that we?re in a conference like the Big Ten gives us a voice at the table with the NCAA, so getting some legislature done with hockey is my hope. It?s been indicated, and I guess time will tell if that?s the case or not, but as from a coaching and administrative standpoint, I think having Big Ten hockey will give us a real voice.

That?s what?s on my mind right now- in football, they get to practice two hours a week in the summertime with their team (in hockey, the NCAA does not permit summer contact between players and coaches). These kids are on campus here and we?re responsible for them, we should have an audience with them to make sure they?re not here goofing off. If we can have a couple hours a week, and they know we?re watching, I think that would help tremendously. My hope is that we can put a foot forward with the NCAA through the Big Ten and say, ?this needs to be changed.?

Q: What are the biggest differences in college hockey between when you played and now?
A: The players are bigger, stronger and faster at this level. I think with the advent of more colleges, the word parity comes up a lot, and I certainly believe that?s true. Back when there were fewer teams, you could have three lines that were really deep, you could be very talented all the way up and down. With more teams that talent is spread out, which creates this situation of parity and makes it really exciting for everybody-it?s tough to win.

Q: Any predictions for the conference going into this season?
A: I?ll use that term parity again, because I think it?s going to be ultimately competitive. If you don?t strap your helmet on tight every night, you?re going to have it handed to you. It?s going to be a dogfight anytime you go on the ice in the Big Ten. The thing about our sport that is so unique is when you play a team back to back like that it?s tough to win. Just in human nature, you win, you relax and feel good about yourself, and when you lose, you get all ticked off and want to come back and have a great response. The way our league is set up, you have to be very, very good both nights.

Q: What are some benefits of playing back-to-back games? (The Big Ten schedule is built around regular two-game series between teams.)
A: Leaving the WCHA, back-to-back games were all we knew, and I think it was mostly because of travel. It makes it a lot more convenient to go to a place, settle in and play two, and the next week go to another place. It was more logistics than anything else, but I think it?s better in the long run because the games are so intense-it?s like playing Game 7 two nights in a row. That?s one great thing about college sports, we don?t play three or four times a week like the pros, you just go at it. It?s one of the reasons it?s so entertaining.

Q: What should we know about your team?
A: We?re going to be an upperclassman-heavy team. If you take a look back at history, a high percentage of teams that were successful were upperclassman teams. There?s no guarantee, but when you take a look at what we have coming back, the experiences that we?ve had the past couple years, we hope we can pick up where we left off, keep improving and getting better. That?s our task at hand- last year, the last 30 games we had a hell of a record, but that might only get you a cup of coffee someplace. You have to go out there, you gotta start over, be intelligent and play as a team. Our hope is to piggyback off what we did last year, continue to build and grow.

Q: Are there any particular games you?re looking forward to?
A: The first thing that comes to mind is the opportunity to go to Penn State in January. They came in last year, it was their first time here, and now we get to go to their rink. I haven?t been to Ohio State and their rink in a long time. Michigan has renovated their place, and it?ll be fun to go to. The places we haven?t been as often will be fun not only for the coaching staff, but the whole team.

Q: Who are some of the players to look out for?
A: If you go position by position, we?ve got two quality goaltenders. If you take a look at their numbers, they?re pretty spectacular with Joel Rumpel and Landon Peterson (1.96 and 2.00 goals against average in 2012-13, respectively). We?ve kind of got goalie 1A and 1B, which is a good situation because they push each other every day and make each other better. If you go back on defense, we?ve got a couple seniors back there in Frankie Simonelli and Joe Faust, and Jake McCabe who was the captain of the USA world junior team last year.

Those are some names that at least on paper we?re going to rely on. Up front, we have Mark Zengerle and Tyler Barnes. Nic Kerdiles as a freshman finished really strong this past year. Those three were probably as good a line as there was in college hockey for the last third of the season. Those guys are going to lead the way, but we?ll need everyone to contribute.

Q: What makes the Wisconsin brand of hockey unique?
A: I think the measuring stick to that is if we have people saying, ?that Wisconsin team plays really hard, they play very smart, and they play together as a group.? If teams are saying that about us, then we?re doing the right thing.

We had terrific teams, my sophomore year we struggled mightily-we must have had about 16 sophomores and freshmen on the team. The following year we had guys come back from the Olympic team, Mark Johnson came in as a freshman and we had a magical year that year. The next year we went to the Frozen Four again–we covered the whole spectrum from my sophomore year to my senior year. There are a lot of great memories. I met my wife here, got to see a lot of Big Ten sports, and I was very blessed to go here, get an education and participate in athletics.

Editor's note: Jeremy Woo is a special contributor to BTN.com who spent the summer reporting and writing on the inaugural Big Ten men's hockey season.