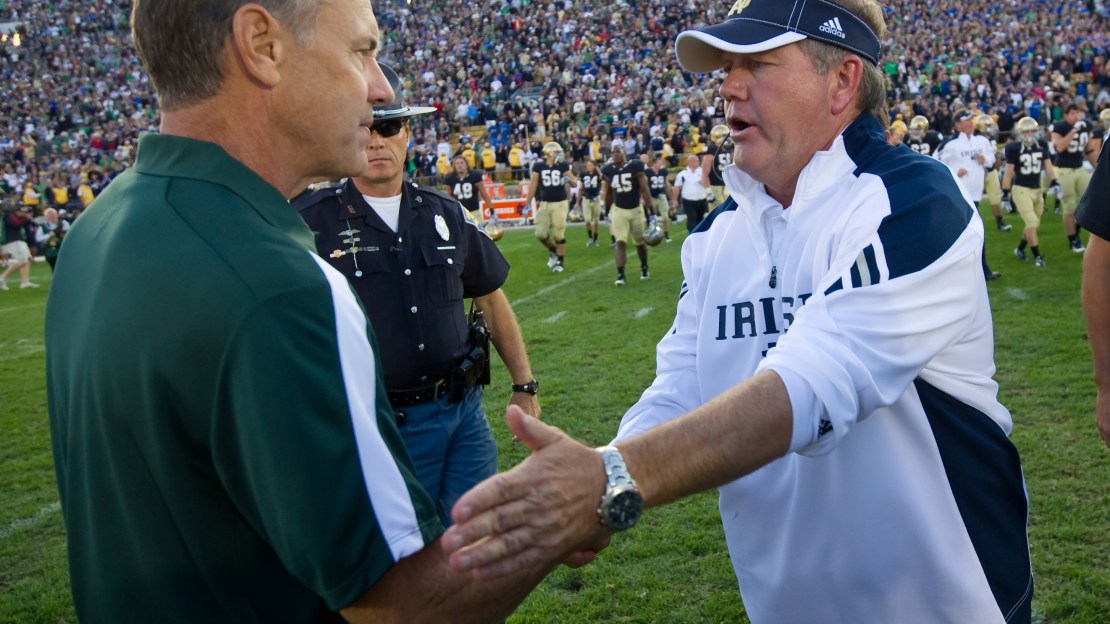 There are 10 games on the schedule this Saturday. And, at first glance, it?s not a great lineup of contests. No doubt, Michigan State?s visit to Notre Dame is the headliner. Lots of good storylines around the Spartans, who think they have found their offense. We shall see. Also, Big Ten play opens, with Purdue traveling to Wisconsin.

But other than that, there isn?t too much to get excited about, with Northwestern, Nebraska and Ohio State all playing FCS foes. Iowa and Penn State clash with the MAC. You get the picture. Here?s a look at the Week 4 games.

Why you should watch: This will be the third Big Ten team that the Broncos will have played, having already lost at Michigan State and at Northwestern. In between that Big Ten workload, WMU managed to lose at home to FCS Nicholls State. Yes, Nicholls State. This is a great chance for the Hawkeyes to bolster their mojo and continue to work on their passing game.

Player on the spot: Hawkeye receivers. This offense has nice oomph and punch in the rushing game. But the aerial attack needs more juice. The receivers need to step up. Maybe putting Tevaun Smith in the starting lineup will help. Bottom line: This offense needs to stretch the field with Jake Rudock at the controls.

Key matchup: Western Michigan offensive line vs. Iowa defensive line. The Hawkeye front needs to dominate and get some sacks from guys like Carl Davis, Dominic Alvis, Drew Ott and Louis Trinca-Pasat, among others. This should be a physical mismatch in Iowa?s favor. Make WMU pay, Herky.

Why you should watch: This could be a tough game for the Gophers. In fact, it may be their most difficult non-conference game. San Jose State, which was off last week, has an NFL prospect at quarterback in David Fales. Beware, Goldy. Minnesota may start Mitch Leidner at quarterback for an injured Philip Nelson (hamstring). Leidner came on for Nelson last week and looked solid. It also will be good to see Jerry Kill back on the sidelines after he suffered a seizure last week at halftime.

Player on the spot: The Gophers running backs. With Donnell Kirkwood out the past two games with injury, Minnesota has seen Rodrick Williams and David Cobb come on and carry the load. Good thing, because Minnesota wouldn?t have much of an offense without their punishing runs. They must continue to run with aplomb. Kirkwood practiced this week, as did Berkley Edwards, who also has been out with injury, so the Gopher ground attack may be bolstered even more.

Key matchup: Gophers secondary vs. San Jose State QB David Fales. A strength of the Minnesota defense is the secondary. Derrick Wells and Brock Vereen must lead the way, especially with Briean Boddy-Calhoun out with injury. Fales will test the unit with his arm and savvy. It will help if defensive linemen like Thieren Cockran and Ra?Shede Hageman can get a push.

Key number: 3, sacks by Theiren Cockran, which leads the Big Ten. And he?s tied for the league lead in tackles for loss with five.

Why you should watch: There aren?t a whole lot, honestly. Florida A&M is a FCS program that can?t matchup with the Buckeyes. This game could be over after a quarter, as Ohio State opened as an over 50-point favorite. The biggest drama: Will Braxton Miller play? He didn?t last week at Cal as he recovers from a MCL sprain suffered in Week Two. If not, Kenny Guiton is more than adequate.

Player on the spot: RB Carlos Hyde is back after serving a three-game suspension. He hasn?t been missed-or really needed-the first three games. But now, he?s back, and needs to get up to speed with games vs. Wisconsin and Northwestern looming. Jordan Hall has done well in Hyde?s absence, buy Hyde is a physical between-the-tackles presence.

Key matchup: The Ohio State defense line vs. the FAMU offensive line. The Buckeye defense needs to show a sharper edge and make some big plays vs. an opponent that lacks the depth and talent to hang with the Big Ten?s best team. And the big plays-and dominance-need to take place up front from Noah Spence and Co.

Key number: 15, wins in a row for Ohio State, the longest current skein in the nation. The longest winning streak in Buckeye annals is 22 games from 1967-69.

Why you should watch: Michigan State is 3-0. It?s not a pretty 3-0, but it?s 3-0, with wins coming vs. Western Michigan, South Florida and Youngstown State. Now comes a defining junket to Notre Dame. The Spartan defense is ready. But is the offense?

Player on the spot: Michigan State QB Connor Cook. He earned his first career start last week-and the sophomore looked good. But that was vs. FCS Youngstown State. This is Notre Dame. Cook is gonna have to be more than a game-manager. He?s gonna have to make some plays with his arm.

Key matchup: Michigan State offensive line vs. Notre Dame defensive line. The Spartans? front is developing and has potential. This will be a test unlike any it has seen this fall. The Irish have some studs up front in Stephon Tuitt and Louis Nix III. The MSU front must protect Cook while also getting a push in the running game.

Key number: 4, defensive touchdowns for Michigan State, the most in the nation. It didn?t score any last season.

Why you should watch: We already know the outcome. The Cornhuskers are gonna annihilate the FCS Jackrabbits. So, the real drama will be to see how fans react to Bo Pelini in his first game since the now-infamous profane recording was posted by Deadspin.com earlier this week. Oh, and will Taylor Martinez play? He is nursing a toe injury. If he can?t go, Ron Kellogg III or Tommy Armstrong is in reserve.

Player on the spot: The quarterback-whoever it is. Martinez ran 10 times for minus-13 yards in the 41-21 loss to UCLA that turned the Cornhuskers? world upside down. Some big plays are needed from the position. Martinez or Kellogg or Armstrong need to play turnover-free and make some plays in the passing game for an offense that didn?t score in the second half last week.

Key matchup: South Dakota State offense vs. Nebraska defense. The gosh-darn unit must not just mute SDSU-it must dominate. No missed tackles, especially by the secondary. The Husker defense needs a suffocating effort to boost its confidence.

Why you should watch: Not much juice here, as this looks like a big mismatch. The Wildcats could make a case for being the best team in the Big Ten. In fact, among the unbeaten teams in the league, Northwestern is the only one that hasn?t had a clunker game.

Player on the spot: QB Kain Colter got dinged up in the opener but is rounding in form. He needs to continue honing his game with a visit from Ohio State looming on Oct. 5 following a bye week on Sept. 28.

Key matchup: Northwestern offensive line vs. Maine defensive line. The Wildcats front has been terrific thus far after replacing three starters. It?s a big, physical unit that has paved the way for a strong rushing attack that is averaging 249 yards and has thrived with limited contributions from injured Venric Mark.

Why you should watch: Let?s see how the Nittany Lions defense responds after yielding a whopping 507 yards to in a 34-31 loss to Central Florida. Penn State allowed 219 yards rushing and 288 yards passing. Too many missed tackles.

Player on the spot: Zach Zwinak. The Nittany Lions running back must run well. He has 232 yards this season and receives ample support from Bill Belton (163) and Akeel Lynch (140). The better PSU runs, the better young Christian Hackenberg passes.

Key matchup: The Penn State defensive line vs. Kent State offensive line. This should be a physical mismatch for the Nittany Lions vs. a Golden Flashes team that?s 1-2. DaQuan Jones, Deion Barnes and Co., need to run roughshod over this MAC team that has lost swagger since Darrell Hazell left for Purdue.

Key number: 8, true freshmen who have played for Penn State. Three of those have started.

Why you should watch: This is the first Big Ten game of the year. It?s also a chance for the Badgers to get the bad taste out of their mouths from the loss at Arizona State. Meanwhile, Purdue will try to build on the momentum it got from a competitive close loss to Notre Dame.

Player on the spot: Wisconsin QB Joel Stave. Honestly, he didn?t pass well at Arizona State, hitting just 15-of-30 attempts for 187 yards. He needs to be more productive so teams can?t gang up on the run.

Key matchup: Purdue offensive line vs. Wisconsin defensive line. The Boilermakers front is coming off perhaps its best effort of the season in the ND loss. It must continue vs. a strong, veteran Badgers line. If the Purdue o-line can?t get a push, the Boilers will have little chance.

Why you should watch: This will be Indiana?s toughest non-conference test, as the Hoosiers face a SEC foe. True, it?s not Alabama, Florida or Georgia. Still, Mizzou-which is 2-0 with wins over FCS Murray State and Toledo–is a nice team that will have the most talented club on the field on Saturday. This is the only Big Ten-SEC matchup during the 2013 regular season.

Player on the spot: QB Nate Sudfeld. He has emerged from a three-man race to be the quarterback. And he?s looking good. But running backs Tevin Coleman (332 yards rushing) and Stephen Houston (194) hold the key. When they run well behind an emerging line, the Hoosiers are tough to stop.

Key matchup: Indiana linebackers vs. Missouri QB James Franklin. The Hoosier defense rebounded from a tough 41-35 loss vs. Navy, which had 515 total yards and 444 on the ground. But IU?s defense allowed just three points vs. Bowling Green, which scored its lone touchdown on a blocked punt. Franklin is a big quarterback who can run and throw for a balanced attack that averages 260 yards rushing and 270 yards passing.

Key number: 150, points by Indiana over the past three games. That?s a school record for a three-game span.

Why you should watch: The Wolverines received a loud wake-up call last week in a 28-24 win over Akron that felt a lot like a loss. In fact, Michigan didn?t deserve to win. But this is a new week, and Brady Hoke no doubt has the full, undivided attention of his players after the great escape vs. Akron.

Player on the spot: QB Devin Gardner. He has made eight career starts and has an interception in each one. His unrefined decision making was on full display vs. Akron, when Gardner tossed three picks and lost a fumble. He has to be more careful with the ball while maintaining his wondrous playmaking skills.

Key matchup: Michigan defensive line vs. UConn offensive line. The Wolverine Nation continues to watch and wait for the d-line to assert itself and make some sacks. The unit also needs to contain better and just flat-out make more plays. This is a bad UConn team that has lost to Towson State and Maryland.

Key number: 5, wins for Brady Hoke away from Ann Arbor vs. seven losses. He?s 17-0 in the Big House.