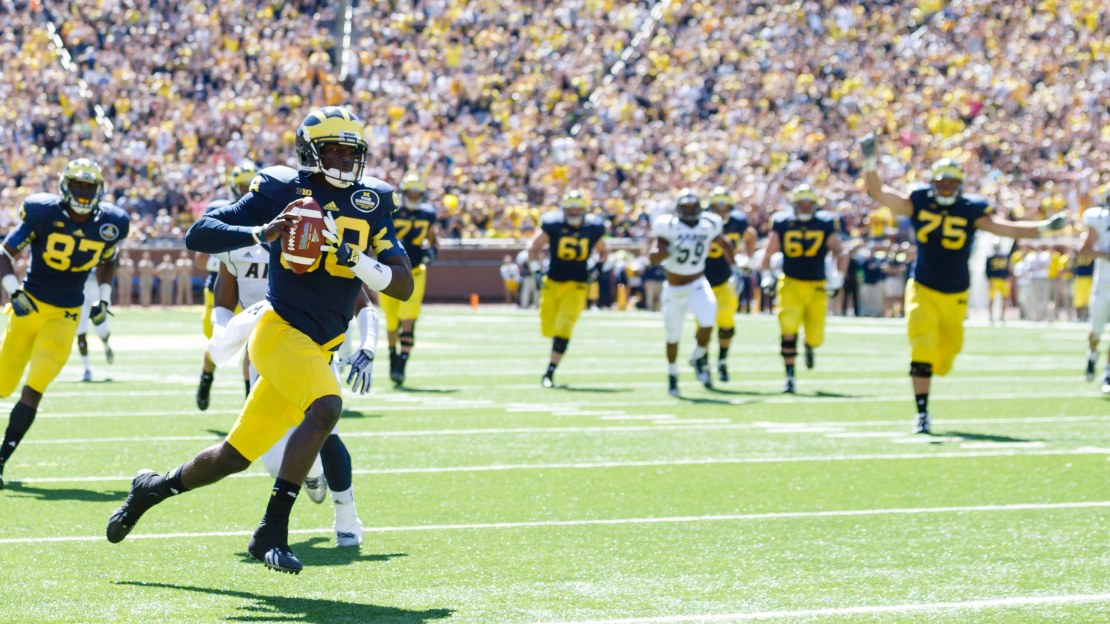 We all know Michigan quarterback Devin Gardner had a bad game vs. Akron. Brady Hoke?s advice: move forward. Well, that?s often easier said than done. I have to think Gardner has some self-doubt in his mind. And, the only way to get over it is to have some turnover-free games-starting with Saturday?s visit to UConn.

More Michigan: We all know about the Wolverine defensive line and how it needs to do more. Now, coordinator Greg Mattison says it?s incumbent on him to coach the unit better.

Michigan has just five sacks as a club through three games this season, and only one of those sacks (Mario Ojemudia) has come from a defensive lineman. Mattison, who co-coaches the position group with head coach Brady Hoke, insisted in the offseason that his front four would be better than it was a year ago — when the Wolverines got just 12 sacks in 13 games. This unit is too talented to not be more productive.

Time stops for no one. Not even Bo Pelini, who coaches on amid uncertainty as he tries to move forward after a recording was released on Monday that feature Pelini using course language and deriding Nebraska fans.

What is Pelini?s job status? Brian Christopherson of the Lincoln Journal Star says Pelini talked in person about the issue with Husker athletic director Shawn Eichorst and by phone with UNL Chancellor Harvey Perlman. But Pelini said he had not had any further conversations with either of the men Tuesday. With nothing said, Pelini was still planning on coaching in Saturday's game against South Dakota State.

?I haven't been given any assurances, but you just proceed with the information you have, and I'm the head football coach until someone says different,? Pelini said.

To add to the controversy in Lincoln, the Huskers don?t know who will start at quarterback with Taylor Martinez nursing a toe injury.

While on the subject coaches venting, Iowa coach Kirk Ferentz says he does it at home. Smart man.

?It?s pretty much what I tell our players and explain to them,? said Ferentz to the media. ?They really need to assume they?re being recorded or taped or both pretty much any time they?re anywhere other than a closet, maybe. So that?s kind of the deal there.

?My wife probably gets my vents. She?s the recipient, and that is probably risky, too, because that?s about a 50?50 shot of me being in good standing there, and I?m exaggerating the 50 part for me. Usually I?m way behind in the count there.?

Penn State?s Deion Barnes was the 2012 Big Ten Freshman of the year. Big things were expected this season. Alas, thus far, he has no sacks.

?I think he's playing with great effort. He's an excellent player. I believe people are running away from him. I think that people are giving the tackles help in protection with him. I would, too," Bill O'Brien said during his weekly news conference Tuesday.

"We've got to do things to move him around and help him out a little bit.  We will and we have. But Deion to me is playing well. I'm glad he's on our team, I can tell you that."

On the subject of Penn State defense, if ?thud? tackling in practice wasn?t the reason for the Nittany Lions? tackling woes vs. UCF, what was?

"It has to be being in better football position, being aligned correctly," Bill O'Brien said. "I thought we were aligned improperly sometimes. So those are things we can correct."

The good news for Michigan State?s offense: The worst is over. At least that?s what Graham Couch of the Lansing State Journal thinks.

Connor Cook is the new top quarterback and will start this Saturday at ND, while Macgarrett Kings, Jr., and Aaron Burbridge are the new top wideouts. But, are they really the answers? I think some may be hyperventilating too much over a 55-17 win over a FCS foe. Wake me up after Saturday?s game at Notre Dame.

?I just feel like what you saw last week is just the beginning for our offense,? Cook said.

Again, we shall see.

Iowa?s M.O. thus far: run the ball often. And, it has worked.

Pat Harty of Hawkcentral.com says much was ?written and said during the spring and summer about Iowa shifting on offense to a more up-tempo spread attack. The thinking was that last year?s passing attack was so inept under new offensive coordinator Greg Davis that changes had to be made to keep up with the how the game is played today.

?And although some changes have occurred, including using no huddle, the power running game still is what Iowa does best. It might be considered simple and old-fashioned. But who cares if it works??

Amen. Keep feeding Mark Weisman and all of those good backs.

This is an incredible number: Wisconsin?s last 11 losses have been by seven points or less.

?Boy, we?ve faced a lot of heartache, haven?t we?? Ethan Hemer said. ?I?ll tell you, these experiences are building toward something for us, creating a resolve around this team - especially guys that have experienced it for the last few years - a lot of success but a lot of close heartache games.?

Just think of what might have been? But, honestly, this team has gone to the last three Rose Bowls. How much better could it have been?

For all people with epilepsy-especially kids-Jerry Kill is an inspiration.

Keep coaching, Jerry, no matter what anyone else says.

So, this is why Korie Lucious was booted off the Michigan State hoops team: He was smoking a lot of marijuana.

NU OC Tim Beck on why Nebraska needs to narrow offense: ?You become the jack of all trades and the masters of none."

Borges on UM offense vs. Akron: "There's some really nice looking plays surrounded by garbage - that's what happened in the game."

All coaches get frustrated and say stuff, not just Bo P. — let's face it, this is more about the UCLA game and the Huskers swoon.

Tim Beckman breaks season into quarters, 3 games each; says team met or surpassed most of its goals for Q1.

My take: I would agree.

My take: Good to have an annual presence in Chicago, I think.

Andersen said last game worse than a blown call: "It?s a bigger deal than that, not a call you can question … the game that never ended."

My take: Oh, the game ended. Just not properly.

I would be surprised at this point if Braxton Miller didn't start Saturday. They want to get him some touches before Wisconsin.

Remember, Ohio State has yet to score a TD in the fourth quarter this season.