Seth Littrell: 'I’d give the offense about a C-plus' 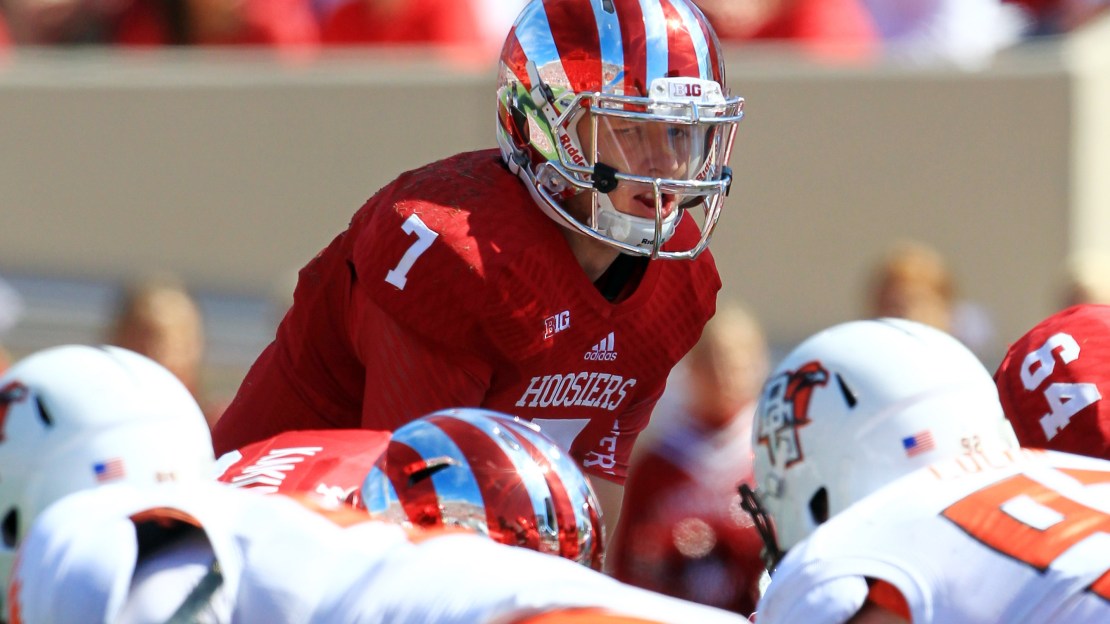 Yes, Indiana?s competition hasn?t been the most stern (Indiana State, Navy, Bowling Green). Nonetheless, the Hoosiers have been a buzz saw. And they?ll have to continue to score, score, score if they want to reach just the program?s second bowl since the 1993 season, as the defense remains a work in progress.

Coordinator Seth Littrell pushes the buttons on an Indiana attack that has myriad weapons at wideout, strong running backs, good quarterbacking and an emerging line.

I caught up with him to get his thoughts on his attack as the 2-1 Hoosiers prepare to play a big home game vs. Missouri at 8 p.m. ET Saturday on BTN/BTN2Go.

Q: Are you happy with where the offense is at after three games?
A: Overall, it has done some good things. The biggest thing is consistency. I still don?t feel like we?ve played a complete game offensively. Turnovers still have been a problem, which wasn?t an issue last year. We have been too sloppy this year. I felt maybe that cost us the Navy game (41-35 loss). We had too many early mistakes last week in short-yardage vs. Bowling Green (42-10 win).

But overall, we?ve made some explosive plays. We are spreading the ball around. This past game, I was pleased with the run game which wasn?t as good the first two games. Overall, I?d give the offense about a C-plus. We just need to get to that A-level somehow. Once we get settled and figure out our identity, we will have a chance to do something special.

Q: So, sophomore Nate Sudfeld is the guy at quarterback?
A: He?s the guy right now. But it?s a long season and you never know how it?s gonna go. Last year, Tre (Roberson) was the guy after Game Two. We are trying to get them reps. Tre is still a guy who can come in and throw the ball and make plays with his feet. There is gonna be a spot and a time and place for him this year. When he gets the call, he needs to perform like a starter. Nate and Tre are good enough to be starters. Nate has played well, and that?s the way we?re going. But there will be a point in time when we need both those guys.

Q: Why Sudfeld over Roberson?
A: The first game, Tre really did nothing wrong. His ribs got dinged up and Nate came in and had some really good series. We didn?t think we needed to put Tre back out there with the way Nate was playing.

The second game, we had miscues early that were on the surrounding players, not the quarterback. We did some bonehead things early in that Navy game. We thought maybe Nate would give us a spark off the bench. Nate came in and moved the ball. He threw a pick but we stuck with him and he just got hot. It?s hard to take a guy out after that.

We had a lot of fast tempo in the last game and got up and down the field; we just couldn?t score. Right now, Nate is leading the offense well and is making plays. His rhythm is good, and the flow of the offense is good. Sometimes, you don?t want to mess that up. It?s not so much what Tre did or didn?t do, it?s more what Nate is doing. But there is a time and place for Tre, and we will need him at some point and rely on him heavily.

Q: Which receivers are playing well for you?
A: That?s a hard question. All of them have had their moments. This past game, Cody Latimer had a huge game (six catches for 137 yards). Shane Wynn has had some good games, Kofi Hughes has caught a lot of big balls. (Tight end) Ted Bolser just caught one pass last week but had 10 knockdowns in the run game. Not only are they catching the ball, but they also are blocking. And that?s most important. They are being physical in the run game and blocking on the perimeter. That?s what has helped us be most successful.

Q: When you look at the stat sheet after a game, what do you look for to know you were successful?
A: I look for how many positive plays we had in a game. A run for a yard and a pass completion are positive plays. If you get between 55-70 positive plays in a game, you are rolling, you are ticking pretty good. The first game, I think we had close to 70. You just don?t want negative plays. That?s what it comes down. Last week, I think we ran 78 plays and had 50 positive plays. Eighteen times we had zero or no yards. And that?s too many.

Q: How many plays would you like to run each game?
A: It depends. I don?t really look at the number of plays. But you want between 90-100. You don?t really like to go below 80 if you can help it.

Q: Describe the styles of running backs Tevin Coleman and Stephen Houston? They are a nice tandem.
A: They are similar, but Tevin has more speed. Stephen got rolling a bit last week, and when he gets in the open field, he?s a load. But he?s more of a patient runner. He fills those holes. Tevin has a different speed. He?s big, fast and very powerful. They are very complementary of each other.