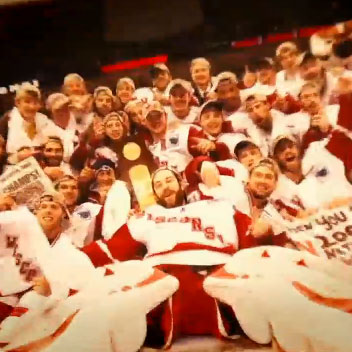 BTN will provide unprecedented coverage of men?s ice hockey in 2013-14, the inaugural Big Ten Hockey season, including eight straight weeks of ?Frozen Friday? doubleheaders in January and February and the 2014 Hockey City Classic at TCF Bank Stadium in Minneapolis.

At 7:30 p.m. on Oct. 11, prior to the season opener between Penn State and Army, BTN will air a 30-minute Big Ten Hockey Preview Show to highlight the season?s key storylines, players and matchups. Beginning Jan. 10, ?Frozen Fridays? also will include pregame, intermission and postgame reports.

This marks the third consecutive season Kelly and Andringa will team up in the booth. Kelly was the play-by-play voice of the Columbus Blue Jackets and Chicago Blackhawks and is the son of Hockey Hall of Fame announcer Dan Kelly. Andringa played both hockey and baseball for the Badgers, and was a member of the 1990 NCAA Champion Men?s Hockey Team. Clymer, a former Gopher standout, played eight seasons in the NHL and won a Stanley Cup in 2004 with the Tampa Bay Lightning. Shepard has called hockey play-by-play for the CCHA, contributes as a host and sports reporter for Fox Sports Detroit and also is the radio voice of Michigan Wolverines basketball. Pletsch is the former CCHA commissioner.

College Hockey News preseason rankings has three Big Ten teams among its top ten, with Wisconsin at No. 3, Minnesota at No. 6 and Michigan at No. 8. The Gophers captured the 2012-13 WCHA regular season crown, their second-consecutive and league-best 14th title, while the Badgers won the 2012-13 WCHA Playoff Championship. In the CCHA conference, Michigan, Michigan State and Ohio State combined to win 14 of the last 20 tournament titles and 13 of the last 20 regular season championships. In its first year competing at the Division I level, Penn State finished its season with five wins in its last seven games.