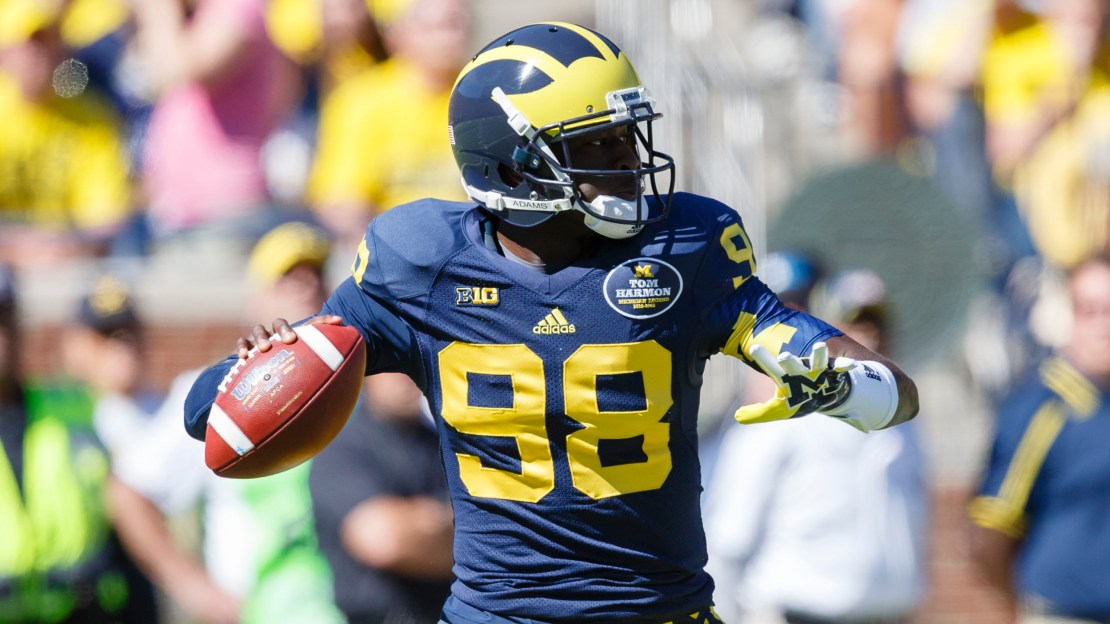 It wasn?t pretty, but Michigan held off Akron for a 28-24 win at The Big House on Saturday. It took a come-from-behind win against a team that hasn?t beaten an FBS opponent since 2010 for the Wolverines to extend their FBS-high 17-game home win streak.

How close was it, exactly? Check out this final play:

As close as it was, Devin Gardner improved to 6-2 as the starting quarterback and Michigan moved to 3-0 for the fourth time in the last five seasons.

However, Gardner?s trend of up-and-down play continued Saturday, as he once again showed signs of both play-making ability and poor decision making.

Gardner finished with 351 total yards, tying his second-highest single-game total behind his 376-yard effort last week against Notre Dame. But he also threw three interceptions and lost a fumble.

Akron had no match for Gardner?s running ability as the junior quarterback rushed for a career-high 103 yards and a touchdown. Three of Gardner?s rushes went for at least 30 yards, including his 36-yard touchdown run that put the Wolverines ahead 14-10 in the third quarter. He only had one such run for his career entering Saturday.

Despite his success on the ground, Gardner was sluggish throwing the ball, completing 53 percent of his passes. That marked his lowest completion percentage in a regular season game as a starting quarterback.

Gardner got off to an accurate start, completing 11 of his first 12 passes from the pocket. However, he connected on just six of his final 16 such passes for the rest of the game.

Akron rarely blitzed Saturday, but when it did, Gardner had no answer for it through the air. When the Zips brought five or more pass rushers, Gardner completed just 25 percent (2-for-8) of his passes with two interceptions. When Akron didn't bring extra pressure (four or fewer pass rushers), Gardner flourished, completing over 63 percent of his passes and throwing for both of his touchdowns.

Gardner mainly struggled throwing the ball downfield. On passes that traveled at least 15 yards in the air, he went just 4-for-13 with two interceptions. For comparison, he completed over 70 percent of his passes that traveled 14 or fewer yards through the air, including hitting his first 10 targets on such passes in the first half.

Turnovers, though, continue to haunt Gardner, who has recorded at least one turnover in each of his eight starts at quarterback.

Looking ahead, the Wolverines travel to East Hartford next week to play Connecticut in their first road game of the season. With a win, Gardner would record his first win away from Michigan stadium as a starting quarterback since his first-career start at Minnesota last season.