Tuesday's links: Is it time to worry about Braxton's health? 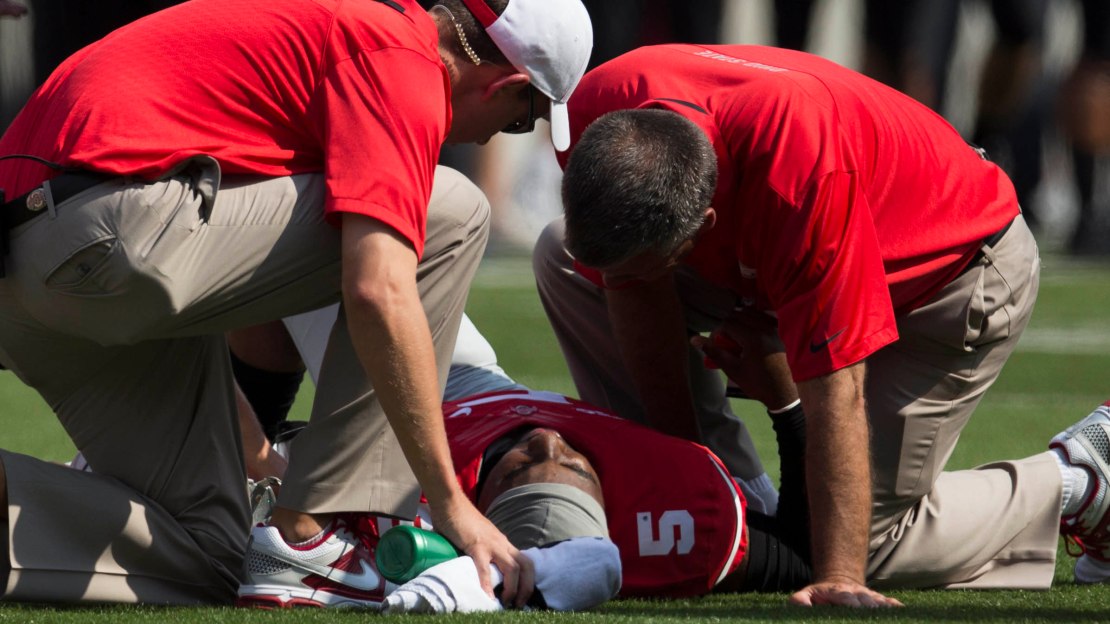 Another day, another reason for Buckeyes fans to fret about possible potholes on the way to an unbeaten season. Should Ohio State fans be worried about Braxton Miller?s seeming inability to stay healthy? Miller has left six games with injuries since taking over in 2011. This is worrisome. Heck, he?s left both games early this season. Check out every instance by clicking here.

Miller?s status for the trip to Cal? It remains uncertain.

But, with super backup Kenny Guiton, the Buckeyes are in good hands. Besides, I don?t think Cal is too good. The Golden Bears struggled to subdue FCS Portland State last week, 37-30. I guess that Northwestern win in Berkeley may not have been all that impressive after all.

Mike Griffith of MLive.com has done some numbers crunching. The defense is gonna like this. The offense? Eh.

The numbers speak for themselves. They don?t lie.  I have nothing else to add.

Andrew Logue of the Des Moines Register wonders where the bravado is for the Iowa-Iowa State game.

For the first time since 2001 - when the in-state clash was pushed back to November following the 9-11 terrorist attacks - both the Hawkeyes and Cyclones have a loss on their record, putting a damper on what is traditionally the state?s most anticipated sporting event. Iowa has lost to Northern Illinois and didn?t impress in beating FCS Missouri State; Iowa State has lost to FCS Northern Iowa. The loser of Saturday? showdown can probably kiss its bowl hopes goodbye. The winner earns only a temporary reprieve from the skeptics.

Once upon a time, Penn State coach Bill O?Brien was a protégé of UCF coach George O?Leary. The two will face off this week.

David Jones of Pennlive.com points out that George O?Leary is probably O?Brien?s most important mentor as a college coach. He was his first real boss and O?Brien served under him the longest of any head coach - seven seasons as a graduate assistant, running backs coach and offensive coordinator (1995-2001) at Georgia Tech. In fact, O?Leary would have taken O?Brien with him to Notre Dame had his hiring as head coach not fallen through due to a resume-padding debacle that resulted in him being fired before coaching a game and replaced with Tyrone Willingham.

Life sure is funny.

Watch Penn State running back Bill Belton discuss the talent that the Nittany Lions possess in the backfield. Belton and Akeel Lynch both rushed for 108 yards on Saturday, giving Penn State two 100-yard rushers in one game for the first time since Evan Royster and Silas Redd both eclipsed the century mark against Northwestern in 2010. Zack Zwinak is still the team?s top back. Where does Belton see him and Lynch fitting into the offense? Watch the video.

Jeff Potrykus of the Milwaukee Journal Sentinel thinks the Badger defense is equipped to handle spread offenses, which have been troublesome for Wisconsin in recent years. Good thing, because this week?s foe-Arizona State-run a nice spread-and awesome spread.

And ASU?s Taylor Kelly will be one of the better quarterbacks Wisconsin faces this year. Good thing the Badgers have seniors throughout their front seven. The secondary? It has three first-year starters-including a freshman. Is Wisconsin ready for this spread?

"I would say we're comfortable," Gary Andersen said. "It is different. The spread offense is really evolving to be two or three different offenses.

"It is not just the triple-option attack with a very athletic quarterback. It's not just the four (receivers) and throw and the zone-read scheme.

"It is a combination of all of them. And I think where it is really going is a lot like what Arizona State has done."

Tom Oates of Madison.com has it correct when he says basically everything has gone right for Wisconsin in the first two games.

Oates notes that AFTER UW outscored its first two opponents 93-0 and outgained them 1,204-325, it?s time to ask the question: What have we really learned about this Badgers team, especially when weighed against the, um, competition it has faced? More important, what did the Badgers learn about themselves?

Who is the best team in the Big Ten? Lee Barfknecht of Omaha.com thinks it?s Michigan.

Barfknecht says after that 41-30 victory over Notre Dame, Michigan moved to the top of his Big Ten rankings, and looks like the most settled and well-rounded team to date. But Barfknecht  says to take note of the phrase ?to date.? Every team is still de-bugging its systems. The Wolverines, though, looked well-tuned in Week 2 against Notre Dame. Interesting. Me? I still am keeping Ohio State on top.

While on the subject of Big Ten rankings, here is the ranking of the great Mike Hlas? of the Cedar Rapids Gazette. Brace yourself: It?s a bit whacky.

Taylor Martinez, on UCLA game: ?I think we?re a lot better than we were last year, and I think a lot more prepared." #Huskers

My take: The point: The Big Ten hasn?t played many good teams.

Hoke says he didn't see Eminem in the locker room … "I heard" he was in the press box.

My take: Eminem is everywhere.

Bo, on uniforms: "Even though it's an alternate look, it's still a traditional look that doesn't go against the values of this program."

#Illini OC Bill Cubit: "The job of an assistant coach is to make sure the head coach keeps his job." #dechr

My take: And Cubit is doing just that!

There are eight B1G teams averaging at least 40 points per game so far. Then there's Purdue averaging 13.5.