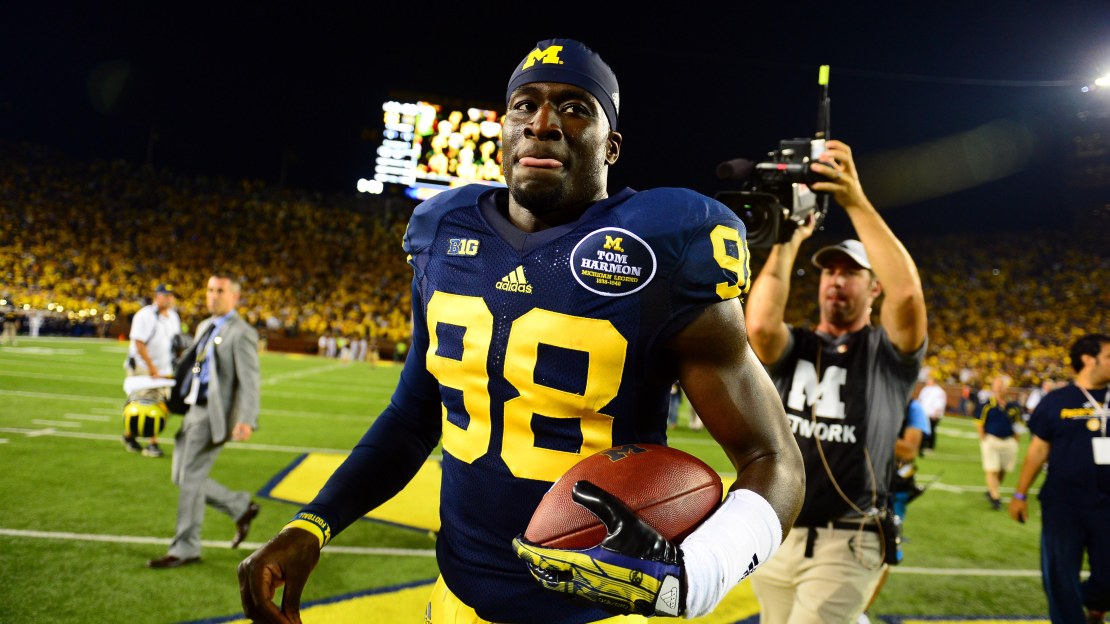 What a Monday to wake up and be Michigan quarterback Devin Gardner! They guy is the BMOC in Ann Arbor after that sensational performance vs. Notre Dame on Saturday night. Heck, he?ll be a BMOC for a while with his skills and this offense. Nick Baumgardner of Mlive.com says if Devin Gardner is on the money, the Wolverines? offense knows no limits.

As Baumgardner notes, if he hasn't already, Gardner officially lives in college football star territory now. He completed 21 of 33 passes for 294 yards and four touchdowns. And Gardner also ran for 82 yards and a score. Making all of this even more impressive: The junior did it all on a national stage, with the country fixated on him for one night. Through two games, Michigan?s offense has tallied 100 points. This has me wondering: Should Gardner now be mentioned in the Heisman race?

This sums up the effort vs. San Diego State perfectly: ?If 100,000 voices could speak as one, it might sound thus: ?Now that?s a little more like it.? Ohio State came out punching and this time didn?t let the Aztecs off the ropes until the bout had been pretty much called. Bradley Roby?s return made a big difference, but a go-get-?em attitude was key.?

Yes, having Roby back helped. But, is Braxton Miller gonna be OK after dinging his left knee vs. SDSU? Ohio State staffers say so. We shall see.

Looking for an early defensive MVP for Penn State? Look no further than tackle DaQuan Jones, who has slimmed down and stepped up.

The great Audrey Snyder of Pennlive.com notes that after two games, the Nittany Lions? senior run stuffer has been a force. Jones leads the team with 18 tackles and two sacks and also leads the way with the most solo tackles (12) and tackles for loss (5). Jones? dominance was noted in the season opener against Syracuse when the Orange opted not to run his way and he had his way with Eastern Michigan, as well. Jones? emergence has been key with Jordan Hill gone.

Hey, it?s Iowa-Iowa State week. But, if you sense little or no buzz, it?s understandable. Each team is coming into the game with a whimper.

The Hawkeyes didn?t impress in notching a victory over FCS Missouri State. Iowa State? Well, it didn?t play last week. Good thing, because the Cyclones were still reeling from a season-opening loss to FCS Northern Iowa.

The great Mike Hlas of the Cedar Rapids Gazette says the Hawkeyes need to make real growth in Week 3, or they?ll struggle at Iowa State no matter how unimpressive the Cyclones were in their opener. And, make no mistake about it: This is a win Iowa likely needs to get bowl eligible.

It was an impressive victory for the Golden Gophers, who lost to the Aggies in 2011. This is a tough, physical offense. Still, more big plays are needed in the passing game.

Nebraska?s defense gained some confidence in a win over Southern Miss on Saturday after suffering some growing pains, says the great Tom Shatel of the Omaha World-Herald. Nebraska allowed just 284 yards, which the Husker defense needed after yielding 602 yards to Wyoming in the opener.

Two reasons for excitement for the Husker defense: True freshmen linebackers Josh Banderas and Nathan Gerry are learning on the job-and excelling. Next up: UCLA, which will be a great test for the young defenders. But Shatel thinks that even if the Nebraska defense struggles, all won?t be lost. He thinks the unit still could be salty by November. I guess I?m not so sure. I think if the defense gets shredded, it could have a negative and lasting impact on the defense?s psyche. And I?m guessing that the psyche already may be fragile. This is going to be interesting.

After two weeks, the verdict on Michigan State?s offense: It?s in free-fall.

Here is all you need to know: The Spartan defense has scored four touchdowns; the offense has two. This is almost too incredible to believe. Heck, a defensive end (Shilique Calhoun) has more touchdowns (three) than the MSU offense. I still can?t fathom that.

Mike Carmin of the Lafayette Journal Courier has an interesting thought to help a struggling Purdue offense that has scored two touchdowns in 2013: run more option with QB Rob Henry, perhaps the best weapon on the offense.

Great idea. As Carmin notes, foes don?t respect the Boilermakers? downfield passing game. And there is a lack of game-changers at wideout. So, why not add a new wrinkle? Purdue is gonna need something with an upcoming schedule that will see the Boilers play Notre Dame, Wisconsin, Northern Illinois and Nebraska. Gulp.

Dan Wolken of USAToday has his weekly ?misery index? out. It?s always a fun read. Oh, and two Big Ten teams made his list: Michigan State and Purdue.

You are welcome for the laughs.

Loved this quote from Bo Pelini on Saturday night regarding last year's loss to UCLA: ?I'm familiar with what they did a year ago." #GameOn

My take: I?m sure he has thought of it each day. I know I would.

Wisconsin has had three players top 100 yards rushing in three of its last four games. Had only happened once in school history before that.

My take: This offense is rolling.

More film stuff — Jake Butt's going to be really good. Played a ton, knows how to get open.

My take: And he?s just a true freshman.

To sum Dantonio teleconference: Team usually doesn't fully practice Sundays but O skill guys are out there right now. All QBs in mix.