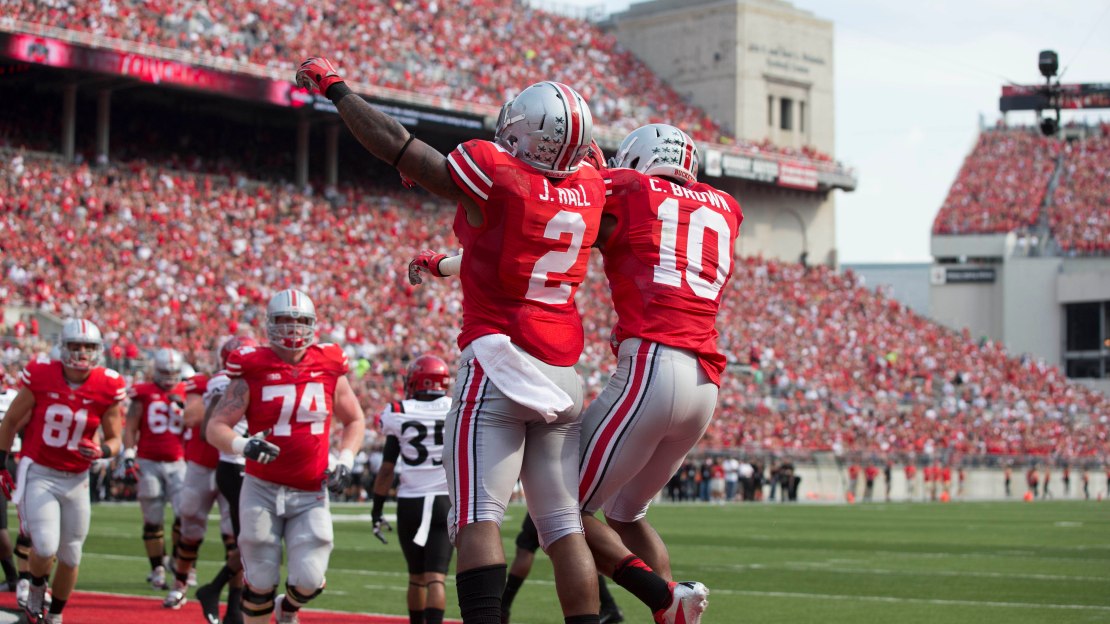 Ohio State entered the year as the overwhelming Big Ten favorite. Two weeks in, are the Buckeyes still the Big Ten?s best? According to Tom Dienhart's latest power rankings, presented ArcelorMittal, the answer is yes. Dienhart and Brent Yarina debate the topic in this post.

Brent: Right now, two weeks into the season, and following Saturday night?s victory over Notre Dame, Michigan has to be considered the Big Ten?s best.

Tom: Yes, Michigan has looked good. But didn?t Ohio State begin the year considered to be the Big Ten?s best? And hasn?t it won both games of its games?

Brent: Sure, the Buckeyes entered the season as the Big Ten?s best, but that means nothing now that the games have started. I wasn?t overwhelmed with what I saw from the Buckeyes vs. Buffalo, and I?m not so sure Braxton Miller can stay healthy.

Tom: All Ohio State can do is play its schedule and win games. So far, so good. Is this football or figure skating? Someone forgot to tell me that style points count more than just winning a game. Are Nancy Kerrigan and Dorothy Hamill gonna be on the coming playoff committee?

Brent: Ha! Good one. I get your argument, however I can?t ignore what Michigan did to Notre Dame, what it did in the Big Ten?s most impressive win of the young season. The offense looked ridiculous. Devin Gardner, he just may finish the season as the conference?s best quarterback. For real.

Tom: Yes, the Michigan offense looked good. It also gave up 30 points to a team led by its backup quarterback in Tommy Rees. (Tommy Rees?) And since when is ND mistaken for Alabama? Look, I?m not gonna penalize Ohio State because it hasn?t had a chance to play (and beat) a good opponent yet. To have wild fluctuations in opinion from week to week based on one Saturday?s results is absurd.

Brent: Almost as absurd as giving Ohio State the claim based on the fact it entered the season as the top team. Look, maybe I?m overreacting to one game - it wouldn?t be the first time - but if I?m forced to pick the top Big Ten team, I have to go with Michigan. And yes, the Wolverines allowed 30 points to Notre Dame. Big deal. It?s not like they gave up 20 to Buffalo.

Tom: OK. So, if Ohio State beats Cal, 45-14, this Saturday and Michigan only beats Akron, 40-20, your logic will dictate that Ohio State is better than Michigan next week because, hey, the Buckeyes whipped a ?better? foe while the Wolverines didn?t look dominant in beating  a lesser foe.

Brent: That?s not what I?m saying at all. I think Michigan?s the best team right now because 1. it didn?t let Buffalo play with it for the final three quarters in Week 1 (it thoroughly dominated Central Michigan, 59-9); 2. its star quarterback hasn?t cramped up and suffered a knee injury; 3. its been the most impressive team, plain and simple.

Tom: Well, fair enough. I still put stock in ?what?s to come/potential? in my rankings. So, if you base rankings on only results thus far, why don?t you have Northwestern No. 1? Its two victims (Cal and Syracuse) arguably are better than any two any other Big Ten has beaten-including your beloved Wolverines.

Brent: Hey, I am looking ahead in saying Michigan is the top team. How, you ask? By taking into account Braxton Miller?s health. As good as Kenny Guiton has been in a relief role, Ohio State isn?t the same team if Miller can?t be on the field every snap. More important, if Urban and company want to keep Miller on the field, they will call his number less often. That?s not a good thing, because we all know Miller is Miller because of his legs.

Tom: Ok, good enough. We both are entitled to our opinion. Too bad yours is wrong! Clip and save this, Brent, and check back with me at the Big Ten title game in Indy. After Ohio State accepts the championship trophy, I?ll buy you a ?2013 Ohio State Big Ten Champs? T-shirt.

Brent: I already have my excuse: Ohio State played in the easier division, had the easier route to Indy. I'd rather just worry about Wisconsin than Michigan State, Nebraska and Northwestern, too.