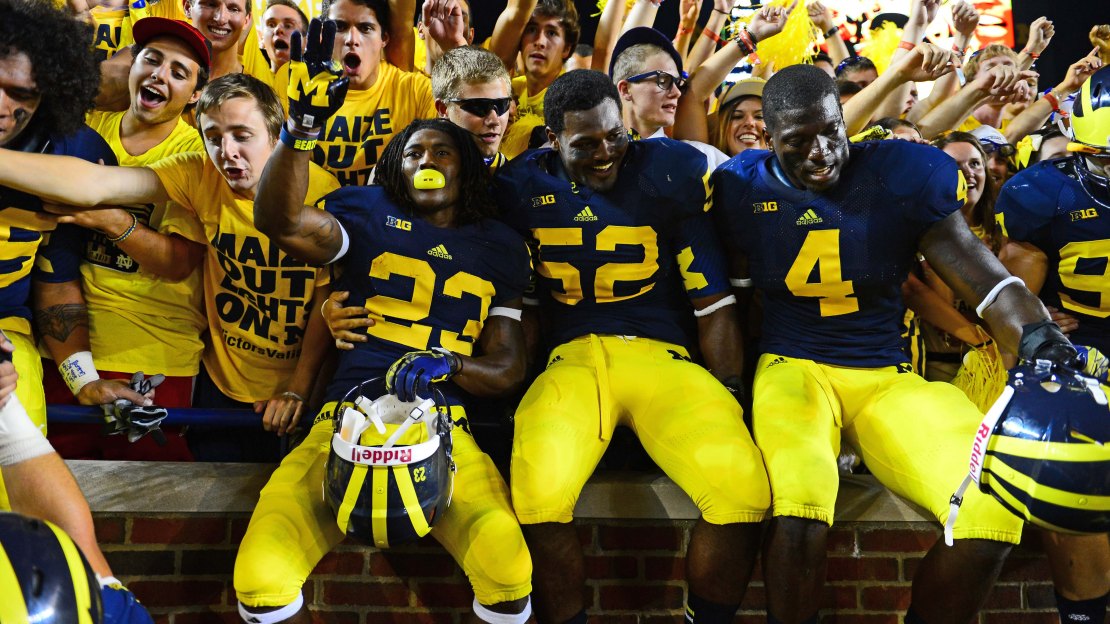 Michigan?s pulsating 41-30 victory over Notre Dame capped another strong week for the Big Ten, which went 11-1 after opening 10-2 last week. It also showed that Brady Hoke's Wolverines should be taken seriously. Very seriously.

Through two weeks, the Big Ten is 21-3, the losses coming at Cincinnati (Purdue) vs. Northern Illinois (Iowa) and vs. Navy (Indiana).

Week 2 saw a lot of great performances-and some that deserve scrutiny. It?s all right here. Enjoy!

Biggest surprise: Illinois. Let?s hear it for the Fighting Illini! I didn?t think Illinois would beat Cincinnati, not after the Illini barely survived last week vs. FCS Southern Illinois, 42-34. Plus, the Bearcats looked impressive in smashing Purdue, 42-7, in their opener. But, the Illini dominated Cincinnati, taking a 45-17 decision. The offense has come to life under new coordinator Bill Cubit after the unit was among the worst in America in 2012.

Biggest disappointment: Michigan State?s offense was a downer-again. But Purdue?s inability to dominate FCS Indiana State should set off some alarms in West Lafayette. Purdue had just 285 yards compared to 295 for Indiana State. Up next: a visit from Notre Dame.

Best play: Purdue?s Akeem Hunt took a reverse hand off on the opening kickoff and raced 90 yards for a touchdown. Good thing. Without that score, the Boilermakers would have lost, 14-13.

Play this again: Michigan 41, Notre Dame 30. It lived up to its hype-and then some-as this was the last time the teams will meet in Ann Arbor until who knows when? Devin Gardner enjoyed a coming out of sorts, passing for four touchdowns and generally looking like an all-around stud.

Never play this again: Wisconsin 48, Tennessee Tech 0. Just like eating a box of Little Debbie Oatmeal Pies, this game had no redeeming value-unless you are Gary Andersen. Or Mrs. Gary Andersen.

1. Illinois offensive coordinator Bill Cubit. It?s time to run for president ? or at least ask for a raise.

2. Nice rebound effort by the Nebraska defense. Last week, the Huskers got ripped for 602 yards by Wyoming. This week, Nebraska yielded just 284 yards in a 56-13 win over Southern Miss. Oh, and the defense even scored two touchdowns.

3. Braxton Miller?s knee. In the first quarter, the Heisman hopeful got caught between two San Diego State defenders and didn?t get up. Miller suffered an apparent MCL sprain to his left knee, as he was carted off the field and didn?t return. After the game, Urban Meyer said Miller would be OK for next week?s game at Cal.

4. Wisconsin?s running backs. Another week, another trio of 100-yard rushers. Ho-hum. The same three Badger backs have done it in each of the first two weeks: Corey Clement (149 this week); Melvin Gordon (140); James White (109). The Badgers finished with 387 yards on the ground after rushing for 393 last week vs. UMass.

6. Nathan Scheelhaase for Heisman? Did I just type that?

8. Ding, dong, Iowa?s seven-game losing skid is over. The Hawkeyes snapped the skid with a workmanlike 28-14 win over FCS Missouri State. Hey, it?s a start.

9. Brent Musburger interviewing Eminem. At first I thought ?Mr. You?re Looking Live? was talking to that hoops player from Ole Miss. But it was someone named Marshall Mathers? Who is that? It?s like when John Cougar suddenly wanted to go by John Mellencamp. Anyway, nothing screams ?college football? more than Eminem.

[ MORE: You saw Eminem in the booth Saturday night, right? ]

10. No. 98. That?s the number of Michigan quarterback Devin Gardner. And, I love it. No. 98 was worn by Wolverine legend Tom Harmon. This is part of Michigan?s ?Football Legend? jerseys program that honors players and their numbers that were retired.

1. Devin Gardner, QB, Michigan. The Michigan quarterback was on his game. Gardner hit 21-of-33 passes for 294 yards and four TDs, while also adding a game-high 82 yards on the ground and a rushing score. He had chemistry working with Jeremy Gallon, who was wearing Desmond Howard?s No. 21. Gallon caught eight passes for 184 yards and three touchdowns.

2. Shilique Calhoun, DE, Michigan State. Remember when there was hand-wringing about William Gholston turning pro early? Ah, memories. Calhoun has looked like Bubba Smith this year, scoring two touchdowns today-one on a 4-yard fumble return and another on a 56-yard interception return. Calhoun scored on a fumble return in the opener. He has three TDs. The MSU offense has two.

3. Nathan Scheelhaase, QB, Illinois. hit 26-of-37 passes for 310 yards and four touchdowns with no picks. He distributed the ball to 11 different players, showing a deadly efficiency. Last week, Scheelhaase hit 28-of-36 passes for 416 yards with two scores and an interception.

4. Kenny Guiton, QB, Ohio State. After Braxton Miller suffered a knee injury in the first quarter, Guiton came on to lead Ohio State to an easy win by hitting 19-of-28 passes for 152 yards and ran for 83 yards. Guiton did this in 2012, coming in vs. Purdue with OSU trailing by eight points with 47 seconds left at his own 35-yard line. He led the Buckeyes to a touchdown and 2-point conversion pass to force overtime. The Buckeyes went on to win, 29-22, to keep OSU unbeaten.

5. Northwestern quarterbacks. You can?t mention Kain Colter without mentioning Trevor Siemian. Rarely have two quarterbacks played in tandem so well. Each performed with aplomb in a 48-27 win over Syracuse. Colter hit 15-of-18 passes for 116 yards with a touchdown; Siemian completed 15-of-19 for 259 yards and three touchdowns. Bravo!

493.0. Yards per game Illinois is averaging through two weeks. Illinois ranked last in the Big Ten and 119th in the nation in offense last year, averaging 296.7. The Illini had 464 yards vs. Southern Illinois and 522 today vs. Cincy.

458. Rushing yards allowed by Indiana in a 41-35 loss to Navy, which threw just four passes vs. IU. Look, this may have been a must-win for IU?s bowl hopes. And it lost. Uh-oh. If the Hoosiers go 2-2 in non-conference action (Bowling Green and Missouri remain), Indiana would need to go 4-4 in Big Ten action, a tall task.

1. Snarky crack about Michigan from Michigan State hoops coach Tom Izzo. Pointing to a weather map that showed threatening weather on a video screen in Spartan Stadium and speaking into a mic, Izzo told the crowd to look at the ?putrid yellow stuff that reminds me of Michigan? as he urged fans to leave for cover. Don?t you love rivalries?

1. The offensive issues persist at Michigan State. In an opening win over Western Michigan, the Spartans used Andrew Maxwell and Connor Cook. This Saturday, MSU went one better by using three signal-callers: Maxwell, Cook and Tyler O?Connor in a 21-6 win over a South Florida team that allowed 53 points to FCS McNeese State last week. What?s it all mean? I have absolutely no idea.

2. Michigan looks primed to open 5-0. The Wolverines next three: vs. Akron, UConn and Minnesota. I thought this team was a year away from big things. I may be wrong.

UCLA is coming to Nebraska. Look out! The Bruins notched 653 yards on the Huskers last year in a 36-30 win in Pasadena.

Ohio State at Cal. This is a dangerous game. Ohio State needs to ask Northwestern about the Golden Bears, who ran 99 plays against the Wildcats in Week One. This is a go-go Cal offense that can get a defense on its heels.

Wisconsin?s trip to Arizona State will be interesting. The Badgers have opened with back-to-back shutouts, which hasn?t been done by Wisconsin since 1958. Impressive. But the shutouts came vs. UMass and FCS Tennessee Tech. This trip to Tempe will be a huge step up in competition.

Iowa at Iowa State. If the Hawkeyes wanna go to a bowl, they likely need to beat the rival Cyclones, who were off Saturday after losing their opener to Northern Iowa.