Dienhart: This was a win Devin Gardner needed 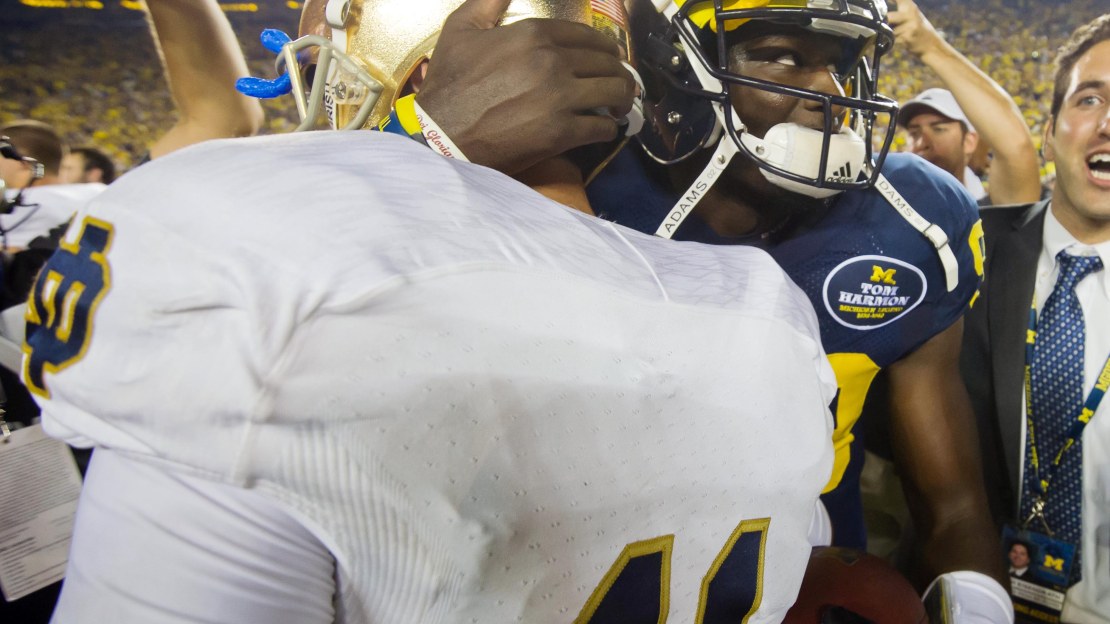 Welcome to the big time, Devin Gardner. And get used to being here, kid. This was the win you needed. This was the victory that provides validation of your special skills.

The world knew all about your fanciful talents. Your blazing feet, quick hips and rocket arm. And we heard time and again about how you were everything that Denard Robinson wasn?t when it came to being a great fit for coordinator Al Borges? pro-style offense.

It all was true-at least on this night when the national spotlight was blaring. It?s gonna be fun to see how this plays out for Gardner and Michigan the rest of the season.

Interceptions were an issue for Michigan quarterbacks last season. In fact, the Wolverines led the Big Ten in picks in 2012. Gardner tossed two in the opener, a 59-9 win over Central Michigan in which he hit 10-of-15 passes for 162 yards with a touchdown. (He also ran seven times for 52 yards and two touchdowns.)

And interceptions almost became a big issue on this night for Michigan. Gardner tossed one of the ugliest picks you?ll ever see early in the fourth quarter when Michigan looked to be in command with a 34-20 lead. Dropping to pass, Gardner faded and was chased into the end zone. On the way down, Gardner made a poor choice to throw. And Irish defensive end Stephon Tuitt picked it off to make it 34-27. ND then kicked a field goal to make it 34-30 with 9:30 left in the game. Things were getting tight. Would Gardner atone for his gaffe?

[ MORE: You saw Eminem in the booth Saturday night, right? ]

Game over, as Brady Hoke moved to 16-0 at home as Wolverines? boss and gave the Irish a fourth loss in a row in Ann Arbor before a record crowd of 115,109.

This game was a big contrast to last year?s Michigan-Notre Dame contest, which the Fighting Irish won, 13-6. In that game, Robinson tossed four picks and lost a fumble as Michigan notched just 299 yards.

Gardner began to emerge, tease and show us flashes last season after Robinson got hurt at Nebraska. The injury allowed Gardner the chance to assume command. He started the final five games of 2012, leading Michigan to a 3-2 record. The victories came vs. Iowa, Minnesota and Northwestern. The losses were to Ohio State and South Carolina.

Needless to say, Gardner needed a signature victory after the 6-4, 210-pounder finished the season by hitting 59 percent of his passes for 1,219 yards with 11 touchdowns and five interceptions. It was good, but he was a work-in-progress who dripped with potential.

But, we saw Gardner start to cash in on some of that vast potential on this night. Gardner hit 21-of-33 passes for 294 yards with four touchdowns and a pick. He also ran 13 times for a team-high 82 yards and a touchdown.

Making Gardner?s coming out party even sweeter is he did it wearing Tom Harmon?s No. 98 jersey. Harmon won the Heisman in 1940 and officially was recognized as a Michigan Football Legend in a pregame ceremony. The junior will wear No. 98 for the remainder of his career, switching from No. 12. A Michigan Football Legend patch over the left upper chest will be affixed to the No. 98 jersey worn by Gardner and all other future players donning Harmon?s number. Now, Gardner and Michigan can move forward. And, they have to like how it looks.

The Wolverines play host to Akron next, then play at UConn and come home to play Minnesota for the Little Brown Jug after a bye on September 28. So, it?s not crazy to think Michigan will be 5-0 when it travels to Penn State on Oct. 12.

Make no mistake about it: This was a big game for Michigan, a chance for the Wolverines to show they were an elite team that may be capable of winning the program?s first Big Ten crown since 2004. But, tough games loom vs. Nebraska, at Northwestern, at Michigan State and vs. Ohio State.

But, let?s let Michigan enjoy this one for a while. And let Gardner bask in the spotlight. At least for a bit. This was his night. Enjoy it.