Hoke: Johnny Manziel would back up Devin Gardner 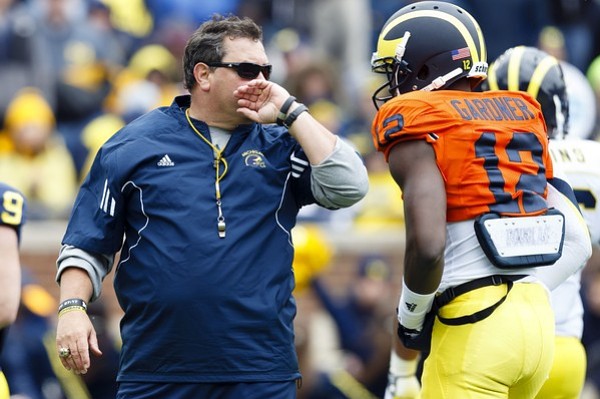 Brady Hoke has been known to make a few bold statements from time-to-time, but the Wolverines' head coach may have topped them all during a radio interview on the "Dan Patrick Show," early Friday morning.

After touching on this weekend's Michigan-Notre Dame matchup, Patrick asked Hoke about Texas A&M quarterback Johnny Manziel, who has been entangled in constant controversy this offseason.

During the interview, Patrick asked Hoke to finish the following sentence: "If Johnny Manziel's your quarterback _________."

Much to the surprise of Patrick, Hoke finished the sentence by saying: "If Johnny Manziel is our quarterback, he'd probably be playing behind Devin Gardner," referring to the Wolverine's starting signal caller. "Devin Gardner… I've got a lot of faith in him."

That's quite a compliment and should serve as a major boost of confidence for the Wolverines' quarterback.

Patrick concluded the interview by asking Hoke to give him his best pitch to attend Michigan over Ohio State.

Here are his answers:

* "No. 1, I'd talk about the academics we have at Michigan and that we're right in between 12-and-15 in the world as far as an academic institution."

* "We're the winningest program in the history of college football."

* "When you play in that stadium, you're going to play in front of the biggest crowd."

* "We've got three goals for every guy on our football team. No. 1 is to graduate at the highest level. Don't let them underachieve because we can't let them cheat themselves. Socially honor your name and who you represent, your family and the decisions you make. And competitively, how you come into this building every day to become the best that you can be for Michigan."

Listen to the full interview here: Brady Hoke on the Dan Patrick Show.