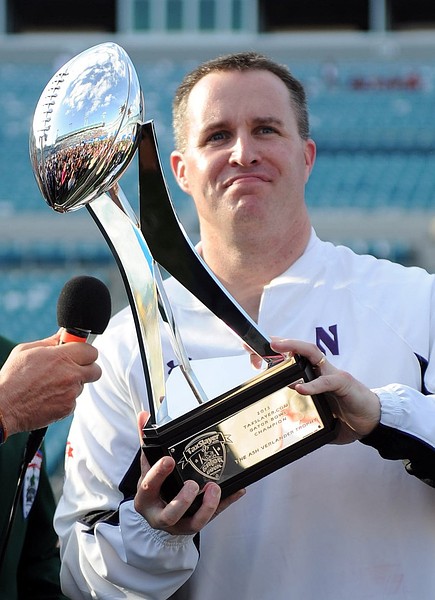 It?s good to be Pat Fitzgerald. He?s a hot, young coach whose program is on the rise as it?s ranked in 2013 coming off a 10-win season and the school?s first bowl victory since the 1948 season. If he was a stock, he?d have a ?buy? rating. Now, he?s a whole lot richer, too.

Fitzy made $2.2 mil last season. This is the first time since 2005 that Northwestern?s tax return has shown a coach to be the highest paid employee of the university and its related organizations, according to documents compiled by USA TODAY Sports.

Boy, I never thought I?d see the day when the football coach was the highest-paid person on the Northwestern campus. Times have changed.

I like Wisconsin defensive coordinator Dave Aranda. He?s a smart, quiet hard-working coach with an aggressive 3-4 scheme that will be fun to watch develop. One of the goals of his unit: create turnovers. So far, so good, as the Badgers had two vs. UMass.

Can?t wait to see how this group does at Arizona State on Sept. 13.

The Notre Dame-Michigan series will end after a 2014 meeting in South Bend. And, Michigan A.D. Dave Brandon has no plans to negotiate a continuation of the series.

OK, let?s all move on from this storyline. We get it. It?s over for now. The world will go on. It has without Oklahoma-Nebraska and Texas-Texas A&M, two more-storied and longer-standing rivalries than Notre Dame-Michigan.

Cleveland.com caught up with Terrelle Pryor to get his take on the suspension of Johnny Manziel. Did the punishment fit the crime, which in a way was similar to Pryor?s transgression that cost him five games?

Boy, Pryor has grown up.

This is interesting: Urban Meyer says speedy freshman Dontre Wilson is more of a receiver right now than a running back.

I don?t care what he is: Just get him the ball.

Nice story by Teddy Greenstein of the Chicago Tribune on Northwestern linebacker Collin Ellis, who pushes on even after his father committed suicide a few years ago.

It certainly doesn?t help that Jamel Harbison will be out a second game in a row because of a discipline issue. This offense needs some big-play explosiveness.

Meanwhile in Champaign, Illinois A.D. Mike Thomas is looking for progress from Tim Beckman. What is progress?

So there is that.

Herb Gould of the Chicago Sun-Times notes that since Illini legend Ray Eliot left in 1959, only two football coaches have had winning records in Champaign - Mike White, who left because of a recruiting scandal, and John Mackovic, who bolted for Texas. This is amazing for the flagship university in a massive state like Illinois.

Need to get caught up on more Big Ten happenings? Check out the chat replay from Lee Barfknecht of the Omaha World-Herald.

On the subject of Nebraska, the Huskers have two of the most impressive looking true freshmen I saw during the BTN tour in linebackers Nate Gerry and Josh Banderas. Players like these will make the Huskers defense better.

The guy is gonna be a stud as he steps in for William Gholston.

Big Wisconsin o-linemen Ryan Groy explains in this video why you won?t see the big fellas up front take part in the Badger tradition of ?jumping around.?

It sounds like there?s a chance for a third quarterback to play for Michigan State this Saturday: Tyler O?Connor.

Oh, boy. Heck, we could see lots of different stuff to spark a struggling MSU offense. Spread ? read option ? wildcat ? stay tuned. Give the coaches credit for trying to be creative. But it?s difficult to prep three quarterbacks for a game.

It?s easy to jab when you no longer are at Michigan, isn?t it? And ?Shoelace? went 1-3 vs. the Spartans. Just thought I?d add that. Oh, Robinson also ranks Ohio State and Notre Dame ahead of Michigan State among Michigan?s top rivals. What?

My take: Those averages will go up after the Tennessee Tech game.

Despite seeming to injure his shoulder against Wyoming, Taylor Martinez hasn't missed a practice rep all week according to Tim Beck.

My take: This, Husker Nation, is great news.

Garry Gilliam notes he hopes Adam Breneman can step up and fill some of Matt Lehman's role at TE for #PennState.

My take: Breneman is good, but the tight end people tell me is the best at Penn State is Jesse James. NFL scouts love him.

It appears the student section at Kinnick has been reduced by one (217) for the rest of the 2013 season. Buy 'em or lose 'em, I guess.

My take: Too bad. Every stadium needs youthful energy in it.

The Iowa FB team is 0-1 for just the eighth time since 1980. Three of those teams went on to have winning seasons and two won bowl games

My take: So, see: There is hope-and precedent.

My take: This would be great news for Northwestern. He?s a dynamic playmaker.

My take: My, how time flies. Seems likes yesterday I was reading about Katzenmoyer?s golf class.

My take: Does it really matter if he starts or not? Of course not. It matters how much he?ll play. My guess: a lot.