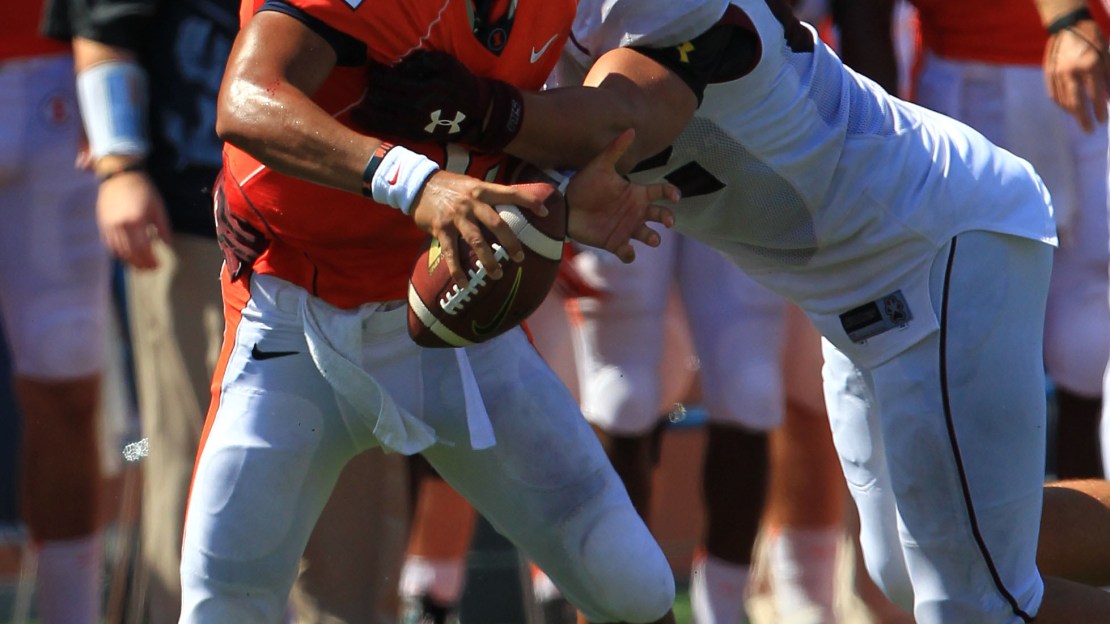 Illinois quarterback Nathan Scheelhaase has had his share of ups-and downs-while in Champaign. As a result, the senior has developed resiliency. He knows not to get too high, or too low. This last Saturday is a perfect example.

Scheelhaase is coming one of the most impressive season-opening efforts in the Big Ten. He passed for a career-high 416 yards en route to leading Illinois past FCS Southern Illinois, 42-34, and earning Big Ten Offensive Player of the Week.

Scheelhaase looked comfortable executing the quick-strike attack of new coordinator Bill Cubit, completing 28-of-36 passes. The next goal: End a 14-game Big Ten losing streak while trying to get the Fighting Illini program on track in the second season under Tim Beckman. But next up is a challenging game vs. Cincinnati this Saturday in Champaign.

Scheelhaase?s moxie will help vs. a strong Bearcats program coming off a season-opening 42-7 demolition of Purdue. He?s mature beyond his years, getting married this summer to his high school sweetheart. No doubt, he?s a steadying influence for a program in search of leadership.

I caught up with 6-3, 205-pound Scheelhaase to get his thoughts on a variety of subjects.

Q: How good was it to get off on the right foot this season, opening with a victory to end the losing skein?
A: It was good to get back into the win column. It was the culmination of preparation and great work in camp. There are a lot of options in what we are able to do on offense. We have a lot of different formations and are able to put guys in position to succeed. Whenever you have that as a quarterback, you build confidence in guys. I felt confident going into that first game of what our guys could do and what we had to do. I think you kinda saw that.

Q: How does this offense differ philosophically from last year?s offense?
A: When you talk about X's and O's, there?s only so much that changes. There obviously are different offenses. But there are only so many concepts you can run. I think the biggest difference for us is we have a lot of different formations that can put a lot of different guys out there. We have a lot of versatile guys who you can?t fit in any one category to what they do. To have running backs, tight ends and receivers like that, you want to be able to utilize them. I think we did a good job of doing that in the first game.

Q: How has marriage changed you?
A: It has been great. I got a text from someone back home who said he thought it looked like I was having more fun than ever out there. He said he thought my wife was taking care of me. She?s a good cook. She?s the best support system I ever could ask for. Being able to have her here, and run out onto the field this past Saturday and see her in the stands ? I know she?s gonna be there all year. It?s a great feeling. It?s a feeling we never really got to experience before because we have been apart. She went to TCU. She would make it up to one or two games a year. Having her here now is a great feeling. It?s great to have that support when things are going good and bad.

Q: You are a Kansas City area native, so I have to ask: What?s your favorite K.C. barbeque joint?
A: Gates. 100 percent. I?m a Gates guy. I put Oklahoma Joe?s a close second. I didn?t realize how great the barbeque was until I left Kansas City. It?s something I miss about the city. I always stop in when I go back. When (ex-Illini lineman) Jeff Allen was drafted by the Kansas City Chiefs, he followed me back home and one of the first things we did was stop at Gates. I had to introduce him to Gates and show him what barbeque is all about. That?s my go-to spot.

Q: Entering the season, receiver was an area of concern. Who has stepped up?
A: The receiving corps comes ready to work each day. They were chomping at the bit all summer and trying to get in extra work. When you have all that, it makes you feel good as a quarterback. Ryan Lankford and Spencer Harris are two guys who are stable and veterans who have played as freshmen and have been making plays since then. Ryan had a great opener. Having veterans like seniors Miles Osei move from quarterback and Steve Hull from safety also has helped. We have guys who have been around the game a lot. The receiving group has a new mentality because of those guys. And Martize Barr had a great game. He?s a guy who came from a juco and has helped us out. He looked alright in the spring, but you didn?t know how much he would help out. He turned over a new side of himself this summer and burst onto the scene in fall camp.

Q: How is Tim Beckman different from last year to this year?
A: We want to be positive. And that starts with our coaches. And the players have to follow suit. We will be positive through whatever adversity strikes. We have to build each other up. We played a game like that on Saturday with some back-and-forth, a 60-minute battle that parallels some of the games we?ll play this season.

Q: You guys went 2-10 last year, 0-8 in the Big Ten. Did you or your teammates get any grief about it?
A: I didn?t hear anything on campus. Anyone who knows what we do as athletes realizes it?s our intention to go out and win every game. But, each time two teams go out, one will lose. We faced a tough stretch last year and everyone was disappointed. There is nothing anyone can say on the outside that can match what you feel as a player. We are the ones out there each Saturday and aren?t doing what we set out to do. We all are disappointed, but we don?t pay attention too much to what?s going on outside. When things are bad, or when things are good, you can?t let your lows be too low or your highs be too high. We don?t focus on what?s going on the outside, even after this last week. It?s a long season and you have to focus on the next game.