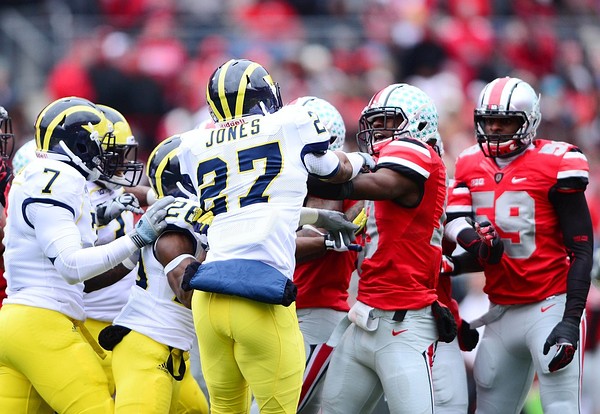 So, Brian Kelly thinks that Notre Dame-Michigan is a regional rivalry? Kelly's words are getting a lot of attention, naturally, because they come days before the two rivals meet under the lights Saturday at Michigan Stadium.

For the record, Kelly backpedaled from his comments today and said that Notre Dame-Michigan is a "great and historic rivalry."

"For me, I've been in Michigan a long time, I've always felt the Notre Dame-Michigan game was a big regional game. But in the Notre Dame history books, this game has (been) played, but obviously there have been some years where it hasn't been played for a number of years."

[ MORE: #BTNLive asks if Michigan-Notre Dame should play every year ]

Nonetheless, this got me thinking: What are the best Big Ten rivalries? Here is my ranking. Sorry, the Old Brass Spittoon, Illibuck and Cannon games didn?t make the cut.

1. Ohio State-Michigan. There can be no other, right? I mean, the annual meeting is simply titled ?The Game.? Yes, that about sums it all up. If you don?t watch this game, then you aren?t a college football fan.

2. Michigan-Michigan State. In some ways, this rivalry may be more intense and hate-filled than the Michigan-Ohio State series because it takes place within state borders. Ex-Michigan running back Mike Hart?s ?little brother? crack still resonates.

3. Wisconsin-Minnesota. Yes, this has no national sex appeal, but the battle for Paul Bunyan?s Axe is an epic rivalry in the northlands. It?s also the longest played FBS rivalry in the nation. Grab your cheese wheel and toque and enjoy this slice of frozen goodness! Here?s a taste of what it?s all about from 2005. Oh, Goldy.

Here?s something Minnesota fans will enjoy.

4. Iowa-Minnesota. The sheer coolness of the Floyd of Rosedale trophy alone makes this one of the Big Ten?s best rivalries. The states share a border–and lots of hatred. Hayden Fry had some fun with Minnesota after a win in 1982, emerging for his postgame presser wearing a red flannel shirt, a white cowboy hat trimmed with a red bandana and overalls after Gophers coach Joe Salem supposedly mocked the attire of Iowans leading into the game. Big mistake. Since that 1982 win, Iowa is 21-10 vs. Minnesota.

5. Indiana-Purdue. This rivalry is proof of the profound impact proximity has on building hatred. It?s white-hot in this state. The battle for the Old Oaken Bucket draws a shrug from national pundits. But, who cares? This is about state pride. And, honestly-is there really anything more precious to a fan than pride? Especially when you have to live and work amongst your rivals? Watch Indiana celebrate a Bucket win in 2007 that sent the program to its first bowl since 1993 and honored late coach Terry Hoeppner.