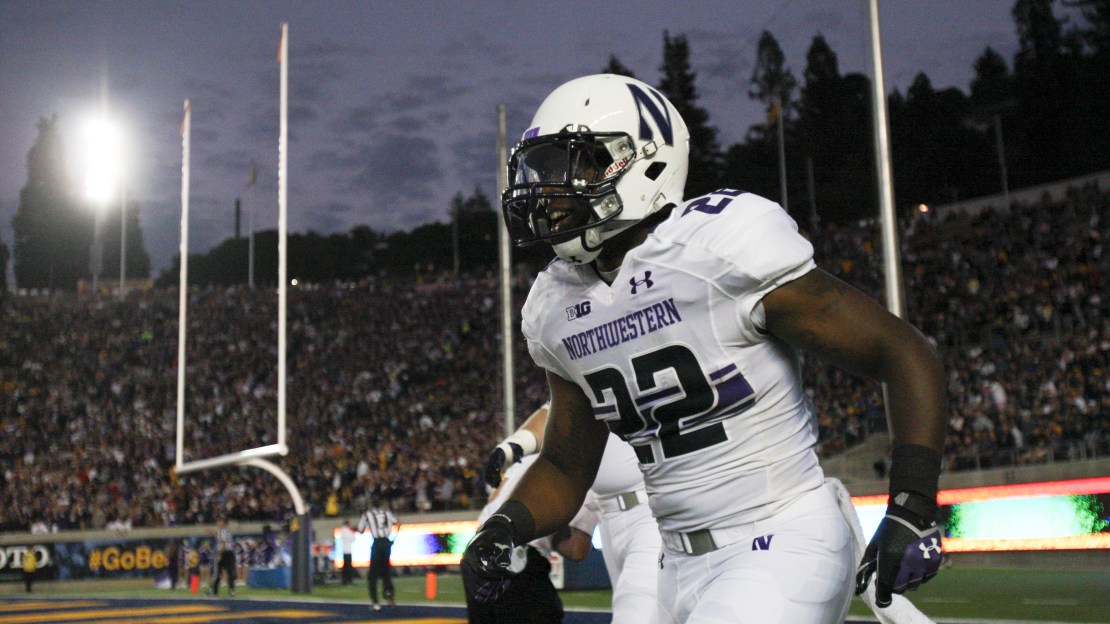 One week is in the books. There was good, and there was bad. Good: Northwestern went to Cal and rallied for a big comeback win. Bad: Purdue looked awful in a rout at Cincinnati. Here are my thoughts, ruminations, honors, grades and numbers from an exciting and eventful opening week around the Big Ten.

Biggest surprise: Northwestern taking it to Cal with a 44-30 victory in Berkeley. Yes, the Wildcats are supposed to be good. But they took it to the Golden Bears on the road, playing a physical brand of football and making big plays on defense. Northwestern sent a message that it just may be able to handle big expectations. Why can?t NU be like Stanford, a school in the shadow of the Wildcats? impressive performance on Saturday night?

Biggest disappointment: Purdue. Look, few thought the Boilermakers would win at Cincinnati, which was coming off a Big East championship and 10-win season. But the debut of Purdue coach Darrell Hazell couldn?t have gone any worse. The Boilermakers didn?t show much on either side of the ball in a 42-7 pasting at Cincinnati. If it wasn?t already apparent, Hazell now fully realizes why he has this job. The Boilermakers are broken-badly-and they need to be fixed. But, it won?t be quick. Oh, and the honeymoon is over.

Best play: Late in the first quarter of Michigan State's 26-13 victory over Western Michigan, Broncos QB Tyler Van Tubbergen tossed a pass that sailed over the head of his target. But Spartans safety Kurtis Drummond leaped in the air, extended his left arm and pulled the ball in with one hand for an interception. Spectacular. Take a bow, Kurtis! Heck, take two bows, you deserve it.

Dullest game: UMass put up nary a fight in fall 45-0 at Wisconsin. Ho-hum. Zzzzzzzz.

[ MORE: Twitter: Get all of Gerry DiNardo's Sunday Ruminations ]

2. Scorching heat was a big winner. Heck, it even forced Ohio State QB Braxton Miller out with cramps at one point.

3. And let?s hear it for torrential rain in East Lansing. The condition caused an extended delay in the MSU-Western Michigan game.

5. Iowa hates close games. It?s now 2-5 in its last seven games decided by three points or less after the loss to Northern Illinois. The Hawkeyes have now lost seven games in a row.

10. With Kain Colter dinged early, Trevor Siemian came on a delivered a big effort in victory. He hit 19-of-30 passes 273 yards. Well-done.

5. Northwestern linebacker Collin Ellis. What can you say about a guy who returns two interceptions for touchdowns to basically lead his team to a comeback victory?

7. Catches for for 133 yards by Penn State?s Allen Robinson. All of that work came in the second half.

2. Defensive touchdowns for Michigan State. If it hadn?t scored those two touchdowns vs. Western Michigan, it would have been a very different game.

169. Rushing yards for Indiana RB Tevin Coleman, the most of any Big Ten player in Week 1. And he did it on 14 carries, and after totaling 225 yards last season.

42. Points allowed by Purdue. It was their worst opening loss since dropping a 52-14 loss at Michigan State in 1996.

13. Years since Iowa dropped its season opener. The Hawkeyes fell to Kansas State to open the 2000 season.

1. Wisconsin?s 45-0 demolition of UMass may have been a bit of fool?s gold. No doubt, the Badgers looked dominating in dismantling UMass, which is a FBS MAC team. Look it up. The rushing attack had its usual punch-in-the-nose effectiveness with 393 yards on the ground. But Joel Stave struggled passing, hitting 9-of-17 passes for 197 yards and two touchdowns with an interception. That must improve.

2. Penn State quarterback Christian Hackenberg is gonna be good. Really good. The touted true freshman got the starting nod and didn?t disappoint, hitting 22-of-31 passes for 278 yards, two touchdowns and two interceptions en route to becoming the second freshman to start for the Nittany Lions at signal caller in the opener since 1910.

3. Northwestern delivered the most impressive win of the first week. Up next: home games vs. Syracuse, Western Michigan and Maine. Yes, the Wildcats could be 4-0 with a bye before playing host to Ohio State on Oct. 5 in a huge game. Maybe even a preview of the Big Ten title game? Hmmm.