Dienhart: 10 things I learned in Week 1 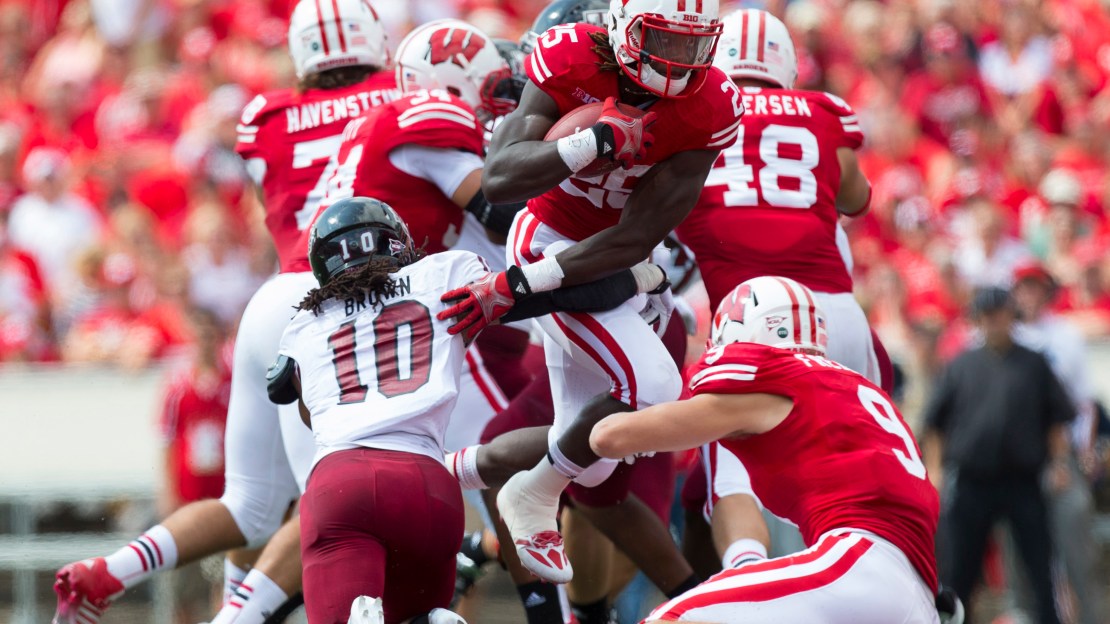 It was a busy first week of action, as we saw coaches make debuts (Wisconsin?s Gary Andersen and Purdue?s Darrell Hazell) and quarterbacks, too (Iowa?s Jake Rudock and Penn State?s Christian Hackenberg). Here are 10 things I learned in Week One.

2. Illinois has a pulse. Was the win over SIU impressive? No. Doesn?t matter. The Illini found a way to win. And that?s all the mattered. Ding dong, the Illinois nine-game losing skid is. Yes, the Salukis are a FCS team. Still, the Fighting Illini needed to just taste victory. Any kind of victory-even one as ugly as this, as SIU was throwing into the end zone in the final minute with a chance to forge a tie.  The last time Illinois won? It was Sept. 15, 2012, when the Illini dumped Charleston Southern, 44-0, another FCS team.

3. The targeting rule didn?t have the impact I thought it would in the first week. I thought we?d see a couple players per game get tossed. Alas, there were scant few. Hmmm. Stay tuned.

5. Michigan State?s offense still has a lot of work to do. Yes, Michigan State beat Western Michigan, 26-13. But, it wasn?t pretty. In fact, the Spartan offense looked like it has picked up where it left off in 2012. And, that?s not a good thing. MSU managed 297 yards. The rushing game showed some life with 181 yards. But the passing game? Ugh. The Spartans had just 116 yards. Andrew Maxwell started and hit just 11-of-21 passes for 74 yards; Connor Cook hit 6-of-16 passes for 42 yards.

6. Ohio State didn?t miss suspended running back Carlos Hyde. Not a real shocker, considering the Buckeyes? foe was Buffalo. Still, Jordan Hall stepped in and ran for a career-high 159 yards and two scores.

7. The Buckeyes like trickery on extra points. Not once, but twice, Ohio State used gimmick plays to gain two points-with each trick play coming after the first two touchdowns. I guess future foes now have something to think about.

8. Penn State wideout Allen Robinson is a legit difference maker. That is, if you didn?t already know it after he paced the Big Ten in receptions, receiving yards and receiving scores in 2012. He didn?t play the first half, and the school isn?t saying why. But, boy, did Robinson play the second. And it opened up the PSU offense. He finished with seven grabs for 133 yards as the Nittany Lions cruised past Syracuse.

9. Iowa has found a quarterback in Jake Rudock. Yes, he threw that killer pick at the end of regulation that set up Northern Illinois for the game-winning field goal. Still, Rudock played well in his first career game. He hit 21-of-37 passes for 256 yards with two touchdowns. Things just may be OK in Iowa City.

10. Nebraska still has worries on defense. Yes, Wyoming has a good offense that poses issues for many teams. Still, the Huskers got shredded for 602 yards, renewing worries about the stability of a unit that got ripped by UCLA, Ohio State and Wisconsin last season.