Tuesday links: Who has Huskers going 11-1? 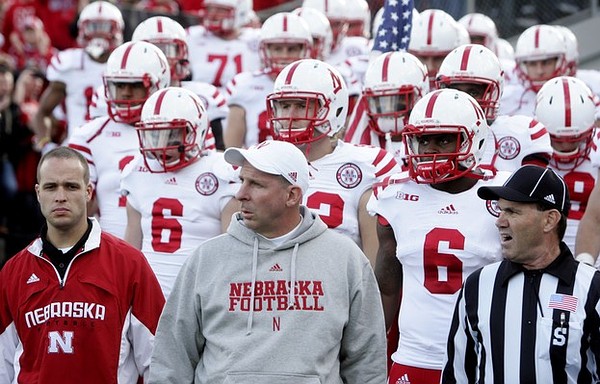 Happy Tuesday, America! We are just 48 hours from kickoff! Until then, keep stretching and make sure your fridge is full. Oh, and read this stuff. When Lee Barfknecht of the Omaha World-Herald types, I read. And he has seven reasons why Nebraska will have a magnificent season.

Barfknecht sees an 11-1 season and BCS bowl berth for the Cornhuskers. And one of the best reasons to chug some Nebraska Kool-Aid is a cushy schedule. Nebraska, of course, is in the Legends Division. Here are storylines for each team in this oh-so-competitive division.

Finally, Michigan has resolution along the offensive line: Jack Miller will start at center and Graham Glasgow will start at left guard.

Joining the duo up front will be left tackle Taylor Lewan; right guard Kyle Kalis; right tackle Michael Schofield. This should be one of the better fronts in the Big Ten this season for an offense that must run better from the tailback spot.

Soon, we will discover how Michigan State will handle its quarterback situation. In the meantime, Mike Griffith of MLive.com has what you need to know about the background and stats of those involved.

Griffith says Mark Dantonio has told local media throughout spring drills and fall camp that fifth-year senior Andrew Maxwell is No. 1 at quarterback, and most expect that's who will start against Western Michigan. The bigger mystery: Who's No. 2? Dantonio has said he will play at least two quarterbacks for an indeterminable amount of time this season so he can avoid repeating what happened with Maxwell entering last season ill-prepared from a game experience standpoint.

The other question, which might not be answered until Friday night's game (or later), involves the possibility Michigan State will play two offensive packages, one involving a read option attack installed by new co-offensive coordinator Jim Bollman. Lost amid the hub-bub over the MSU quarterback situation is how the o-line is looking good. And that may be the best news of all for whoever is Spartans quarterback.

This just in from the good news/bad news department, Michigan State fans: For the second season in a row, Kirk Herbstreit has picked the Spartans to win the Legends Division.

Will Carlos Hyde regain his starting running back job from Jordan Hall when his three-game suspension is over?

?Jordan Hall is the best running back on our team right now,? Urban Meyer said Monday at his news conference. ?And so he'll have to lose that spot. I'm talking next week, the week after, whenever. He's a tailback at Ohio State. He's earned that right.?

Hall has only earned it because Hyde has been suspended, right? Regardless, there is sameness to all of the veteran Ohio State running backs. The guy who may matter the most is true freshman Dontre Wilson, a playmaking speedster like none other on the OSU roster.

Go ahead. Try to frazzle this group of Hawkeyes. They have seen it all, as six players on this squad were redshirt freshmen on a 2009 team that shocked by going to a BCS bowl. They also were part of last year?s 4-8 disappointment. This season, many Iowa watchers have low expectations, but that?s OK. These unflappable Hawkeyes will march on. And they just might surprise you, too.

The Cedar Rapids Gazette?s Mike Hlas? take on the Iowa season? Expectations are dialed down, which means a 7-5 record would probably be greeted the same way it was back in 2000 when the Hawkeyes went to their first bowl under Kirk Ferentz. Namely, as a Renaissance.

That might even apply to a 6-6 season if the team is consistently competitive, competent, and compelling. Long story short: Hlas sees this team in the Buffalo Wild Wings Bowl. I?m not so sure about that, but I?ll play along.

Pretty cool idea by ex-Northwestern QB C.J. Bacher, who has launched HuddlePass.com that brings together the written insights and opinions of 92 former players (to start) into a single hub.

More Northwestern: The Wildcats are altering their sleeping patterns in preparation for their season opener at Cal that will begin a 9:30 p.m. CT on Saturday.

One big difference for Wisconsin players under Gary Andersen? Practices usually are peppered with surprises. Who doesn?t like to be kept on their toes, always presented with something fresh? Exactly. Jeff Potrykus of the Milwaukee Journal Sentinel says camp practices and scrimmages were shorter under Andersen, but there was more tackling, with many of those sessions unscripted.

"Coach Andersen will sprinkle it in during practice unannounced to the team," linebacker Chris Borland said. "He will just say: 'This period is live.'

"We haven't done that in the past. Usually it was scripted. That is unique."

The purpose is to evaluate how the players react to an unexpected departure from the schedule.

Tim Beck called frosh RB Terrell Newby a playmaker "An electrifying guy with the ball in his hands." #Huskers

My take: That highlight gives a lot of coaches nightmares.

Brian Urlacher picks #PennState as his Big Ten team on the rise on @FOXSports1.

My take: Can?t wait to hear who Urlacher picks to win the Stanley Cup.

The only #Badgers full-time assistant coaches who will be up in the press box this season are OC Andy Ludwig and safeties coach Bill Busch.

My take: This is good news.

My take: I?m still stunned, too.