QB Andrew Maxwell to start for Spartans, but … 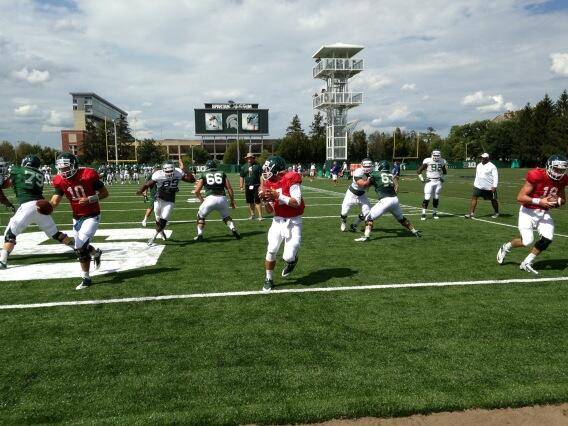 After weeks of waiting and speculation, Michigan State finally has released its depth chart. And there is no resolution at quarterback, as all four contenders are separated by ?ors?.

That?s correct. Weeks of preseason practice seemingly have brought no resolution to this oh-so-key position. Amazing. It?s Andrew Maxwell OR Connor Cook OR Tyler O?Connor OR Damion Terry. This certainly isn't an ideal situation, no matter what East Lansing spin doctors may try to tell you.

So, who will take the first snap for the season opener this Friday at home vs. Western Michigan? It will be Maxwell, according to MSU coach Mark Dantonio, who says he knew Maxwell would start since last Tuesday.

"He was our No. 1 quarterback last year and gained some experience with that,? Dantonio said today. ?He's got great knowledge of our system."

Dantonio said throughout spring drills and fall camp that fifth-year senior Maxwell would be No. 1, even though he?s coming off a so-so 2012 season in which he finished 10th in the Big Ten in passing efficiency. No doubt, Maxwell-who hit just 52 percent of his passes with 13 touchdowns and nine interceptions last season–also was hindered by an inconsistent receiving corps during a disappointing 7-6 season. It?s hard to discount the experience he gained in 2012 as the starter.

Dantonio also long has said he will play two quarterbacks for an indeterminable amount of time. Sure enough, he confirmed today that Cook will play this Friday vs. Western Michigan. Cook impressed when he came off the bench to hit four-of-11 passes for 47 yards and a touchdown in the 2012 Buffalo Wild Wings Bowl victory over TCU last season. On MSU's final drive of the game, Cook hit 2-of-5 passes for 26 yards while leading the Spartans on an eight-play, 45-yard scoring drive, capped by Dan Conroy's game-winning 47-yard field goal with 1:01 remaining that put MSU ahead for good in the 17-16 win.

O?Connor and Terry? It doesn?t sound like they will play Friday. Dantonio said O?Connor is ?in the mix? and that Terry needs to grow.

True freshman Terry turned heads late in camp, excelling in a scrimmage to become a factor in this race. He?s the best athlete among the quarterbacks, making him a nice option to run some spread-option packages. Redshirt freshman O?Connor is another athletic signal-caller who also could run some spread option.