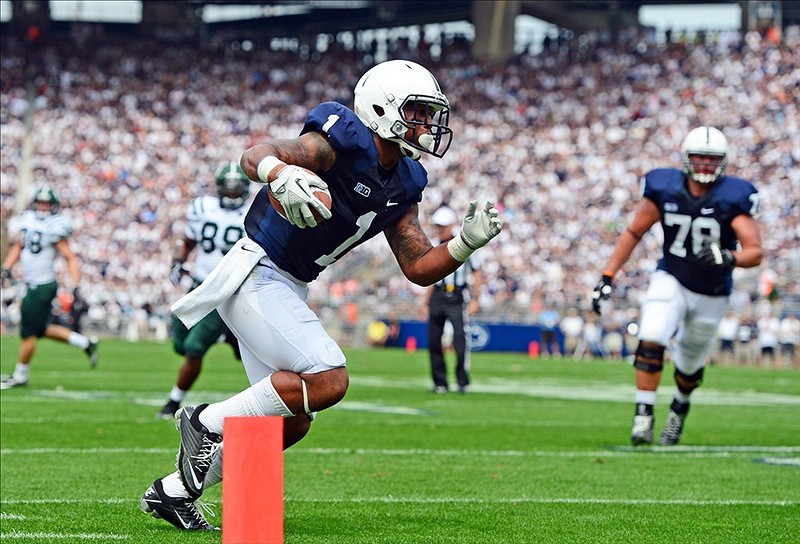 Game week is here! Hallelujah! On Thursday night, Indiana (Indiana State) and Minnesota (UNLV) kick off the Big Ten season. Depth charts are firming up as position battles come into focus. The chase for the Big Ten championship will commence! At Michigan, five key spots have been decided-almost–as the Wolverines chug toward their opener on Saturday. True freshman Shane Morris will be the backup quarterback.

Who will center? And who will play cornerback opposite Blake Countess? And who will be the third receiver with Amara Darboh out? Don't worry. This all will clear up soon.

Nice Q&A with Penn State running back Bill Belton, who could be in store for a good season after a disappointing sophomore campaign.

Belton?s emergence makes running back a deep spot for the Nittany Lions, who also have back 1,000-yard rusher Zach Zwinak and touted redshirt freshman Akeel Lynch.

Ohio State?s freshman class could put the Buckeyes over the top in 2013, just like when Urban Meyer was at Florida in 2006 and he led the Gators to a national title in his second season.

Some freshmen to watch in Columbus: running backs Dontre Wilson and Ezekiel Elliott, and receivers Jalin Marshall James Clark, among others. That?s just the tip of the ice berg of the touted freshmen from the 2013 Ohio State signing class that-Who knows?-may lead the Buckeyes to the BCS promised land.

I know Iowa fans are desperate to know how the Hawkeyes? season will unfold. Well, Pat Harty of HawkCentral.com has looked into his crystal ball and picked the score and outcome of every Iowa game. You aren?t gonna like his crystal ball, Iowa fans.

But, hey, that?s one man?s option. Iowa will have a shot in each game because of guys like running back Mark Weisman, who almost is too good to be true. He is one of my favorites.

Nice piece by the great Tom Shatel of the Omaha World-Herald on Bo Pelini and his ?winning speed.?

Listen to Shatel: ?Pelini needs to win championships. That's his charge as Nebraska football coach. That should be the expectation. Is Bo on the clock? Every football coach is on the clock until he wins big - and then of course until he does it again. Some clocks run faster and some are slower. (Nebraska A.D. Shawn) Eichorst has the stopwatch now. But if he needs advice, he should pay attention to the (Tom) Osborne standards, not necessarily the numbers.?

More Cornhuskers: The quick pace that the Nebraska offense plays at puts pressure on the Cornhuskers defense. And that?s why the staff has tried to build a quicker defense, as Jon Nyatawa of the Omaha World-Herald examines in this excellent piece.

As Nyatawa says, more plays mean, more points and more wins. Get it? Only four of the 24 teams that snapped the ball at least 77 times per game last season finished with losing records. See the trend? But that frenetic pace puts an extra workload on those teams' defenses. The lightning-quick offense is snapping the football with 20 seconds on the play clock, allowing opponents more opportunities to take snaps of their own. Whether offenses are scoring quickly or punting after a three-and-out, the brief possessions don't allow much time for the defenders to recharge. Or strategize. Or refocus.

And that can be hard on a defense that doesn?t have a lot of speedy depth.

The Detroit Free Press is out with its Big Ten preview. See what the scribes think. Hint: They like Ohio State and Michigan.

Hey, the notion of the Spartans being in Pasadena isn?t that farfetched.

One more good one from MSU: Yes, Michigan State?s storylines are less settled in 2013, but they also are more promising.

Graham Couch of the Lansing State Journal says rarely can you find a season so closely approaching where a team doesn?t know who will be throwing, catching or running the football, and yet has legitimate reason for sky-high optimism. MSU?s talent, in many places, is similar to a year ago. But the egos and schedule are more favorable to success.

Mike Hlas of the Cedar Rapids Gazette says that as of as of 7:30 p.m. CT Sunday night, you could get a pair of tickets in the South Stands (end zone) of Ross-Ade Stadium for $2 apiece at Stubhub for the Iowa at Purdue game.

I dare you to find a better deal anywhere else in America.

Tom Oates of the Madison.com revisits 10 questions he had about the Badgers before the start of training camp.

Hey, he?s still waiting on some answers for some of his queries-like quarterback.

Lots of excitement at Northwestern. Here are five things the gang at InsideNorthwestern.com learned in camp.

Not surprised to see JC transfer Damien Wilson win the starting middle linebacker spot at Minnesota. But Jack Lynn also will see action in the middle for a linebacking corps that may be better than many people-myself included–think. Aaron Hill and James Manuel are the other backers.

Hearing really good things about #Northwestern's chances of hosting @CollegeGameDay Week 6 if OSU and NU are both undefeated coming in.

My take: That would be a great spectacle.

The 25 teams that averaged the most plays per game last year had defenses that gave up 29.1 points per game

My take: Is this foreshadowing for Nebraska?

My take: No matter what happens, the Gophers o-line will be better in 2013.

My take: A rarity.

As a kid I missed football so much in spring and summer that I thought the College All-Stars vs. NFL champ at Soldier Field was fantastic.

My take: I miss this game. How cool would it be if it still was played?