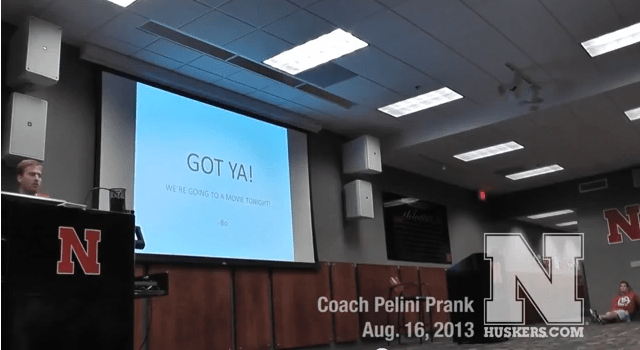 Nebraska head coach Bo Pelini surprised many when he joined in on Nebraska's "Harlem Shake." But if that wasn't enough to show he can have some fun, you've got to check out the prank Pelini and senior defensive tackle Thad Randle pulled recently.

Anyone else drop their jaw after Pelini grabs Randle's phone and smashes it in pieces with a hammer? The prank goes on for pretty long and at one point, the team raises up because they think the two are getting into a physical altercation in the adjacent room.

Once the prank is revealed on the big screen, the team erupts in laughter. And my favorite part: Pelini telling his team, "Thanks for coming to my aid, by the way," when he reentered the room after the hoax was revealed.

If you didn't think Pelini was a funny guy before, this video will certainly change your mind.