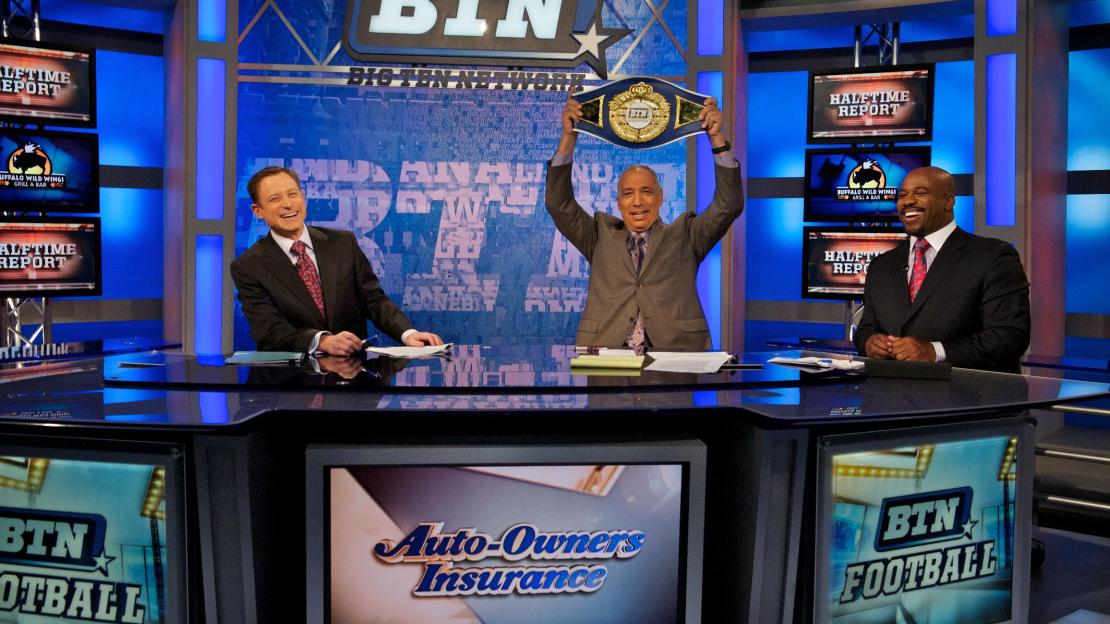 CHICAGO - It?s time to apply the face paint, dig out that lucky jersey and find the sweet spot on the couch - college football season kicks off next week!

In anticipation of the upcoming season, the Big Ten Network surveyed Americans to find out how and where they like to watch college football. It turns out most prefer the big screen at home, enjoy spending time with their friends, and quite a few spend time yelling at the TV while watching their favorite teams battle it out on the gridiron.

BTN?s survey found superstitious fans like to do more than just watch – 53 percent say they wear certain clothes or shoes to help their favorite team beat their opponents while 40 percent felt looking away from the screen sometimes helped their team win. When it comes to superstitions and the game, age matters - 31 percent of superstitious fans are 18-24 while that number drops down to 10 percent by the time fans reach their 60?s.

If they are not at the game, the majority of Americans, 62 percent, prefer to watch a college football game at home and 30 percent of respondents between the ages of 25-34 who do go out, prefer to go to a friend?s house to watch a game. When it comes to game day, 63 percent admit eating is a natural companion to college football which beat out napping (34 percent) and screaming at the TV (31 percent).

Fans can do all of that and more at BTN debuts an extensive slate of fall programming that offers fans more Big Ten football coverage than any other network.

At 7 p.m. on Tuesday, Aug. 27, and Wednesday, Aug. 28, BTN debuts the hour-long Big Ten Football Preview: Legends Division and Big Ten Football Preview: Leaders Division shows. The division preview shows will examine each team?s biggest question marks, including ?Biggest Shoes to Fill,? ?Newcomers to Watch? and what factor will ?Make or Break? each team?s season. At the end of each show, Griffith and DiNardo will announce their picks to win the division.

BTN?s football schedule kicks off at 7 p.m. ET on Thursday with UNLV at Minnesota and Indiana State at Indiana. On Friday, Michigan State hosts Western Michigan at 8 p.m. ET. The Final Drive follows both games and airs every Football Saturday following the day?s last football game.

A full slate of games kicks off at 11 a.m. ET Saturday with BTN Football Pregame, followed by UMass at Wisconsin and Southern Illinois at Illinois at noon ET; Central Michigan at Michigan and Northern Illinois at Iowa at 3:30 p.m. ET; and Wyoming at Nebraska at 8 p.m. ET. The network?s football schedule features a network-high 47 games, including 12 in prime time.

Monday, Sept. 2, at 7 p.m. ET sees the return of the Big Ten Pulse. The show is hosted by Pizzo, with J Leman, Marcus Ray, Eric Crouch and Derek Rackley, who offer an entertaining take on the topics and news around the Big Ten and give their opinions on the biggest stories in sports. The show also airs at 7 PM ET on Thursdays.

BTN Football & Beyond returns on Tuesday, Sept. 3, at 7 PM ET.  Revsine, with analysts DiNardo, Rackley, Chicago Tribune?s Teddy Greenstein, Yahoo! Sports? Pat Forde and others, will give their opinions on the hottest topics in and outside of the conference.

On Fridays at 7 PM ET, Hall will join analysts Jackson and Antwaan Randle El for the BTN Football Report, which offers the final word before Saturday?s action with news, analysis and reports from game sites. The season debut airs Friday, Sept. 6.

And Forever B1G, BTN?s new series debuting this fall, will discover where life has taken some former student-athletes after they left the Big Ten. Forever B1G debuts at 7:30 PM ET at Friday, Sept. 6.

Also returning to the 2013 fall lineup are Football in 60, the Big Ten Game of the Week and Big Ten Women?s Sports Report.

The Journey: Big Ten Football 2013, BTN?s signature original series, will return for a second season in October. Through cinematic storytelling The Journey takes fans behind the scenes during the entire conference football season. Also returning for a second season, Big Ten Elite will document some of the great teams in conference history, including the 1985 Iowa and 2000 Purdue football teams. Both of these series are part of BTN Originals, the network?s award-winning original programming division.