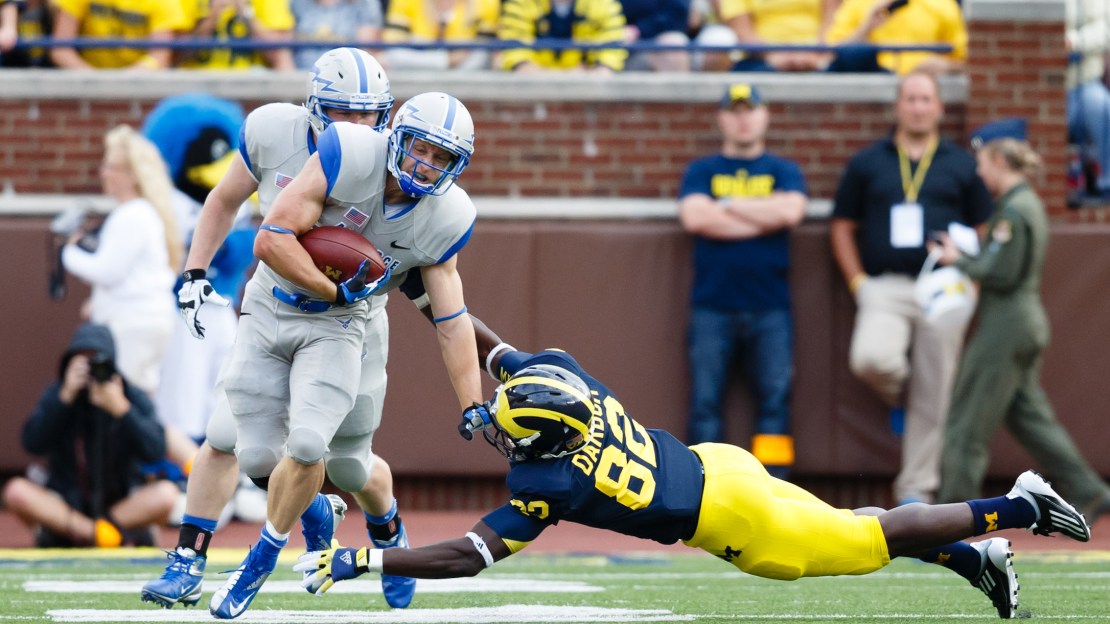 Tough start to a Wednesday in Ann Arbor: Highly touted WR Amara Darboh recently injured a foot that will require surgery and will force him to miss the entire season. This is a tough blow, as Darboh looked to be a rising star as a big-bodied receiver cut from the mold as former Michigan greats.

Yes, Michigan still has Jeremy Gallon and Drew Dileo; and redshirt freshman Jehu Chesson looks good. But Darboh was the guy most seemed excited about at Michigan.

Good look at the upcoming Wisconsin season from USAToday with some interesting quotes from Barry Alvarez on former coach Bret Bielema.

I?m guessing Bielema?s wife has alerted him to this. Just a hunch.

It?s not too early to talk Senior Bowl, is it? Of course not. Here is the 2014 Senior Bowl watch list. Really. I?m not making this up.

This becoming a four-man race may be an indictment on Andrew Maxwell and Connor Cook. I mean, if either had taken charge, I wouldn?t be typing this.

Depth at linebacker isn?t a strength for Minnesota. But the position may be in better shape than we all think. Maybe.

The two JC linebackers I saw while watching the Gophers practice were impressive: De?Vondre Campbell and Damien Wilson, who likely will start in the middle. Aaron Hill is a nice veteran presence at an outside spot. James Manuel and Jack Lynn are other guys to watch. So, Minnesota may be OK here.

Oh, and in case you were wondering, Philip Nelson will start at QB for the Gophers.

No shock here: Brady Hoke says Fitz Toussaint is the starting running back.

TheWolverine.com caught up with Michigan A.D. Dave Brandon. And, after 2014, it doesn?t look like the Wolverines and Irish will be meeting.

What about more Big Ten expansion?

"There's always going to be buzz, and yes, I do anticipate further expansion," Brandon said. "Various conferences are exploring it, but specific to the Big Ten, I think we're pretty comfortable where we are right now. We're still digesting the addition of two programs that haven't even started out yet. We're pretty busy assimilating two very large institutions in getting all the scheduling and both athletic and academic collaborations built.

Count the great Steve Sipple of the Lincoln Journal Star among those who happen to be buying into the hype surrounding JC defensive end Randy Gregory.

Why not? The kid looks like an absolute stud off the edge, a long and lean prototypical pass rusher. And that?s just what this maligned Cornhusker defense needs.

So, who will be the starting quarterback for Penn State? Well, you?ll have to wait, as Bill O?Brien isn?t willing to reveal his hand until the end of the week.

Cory Giger of the Altoona Mirror thinks it?s a good idea to keep the identity of the starter a secret. Why give your first foe, Syracuse, any help? But, honestly, will Syracuse prepare or game plan that much differently based on if Christian Hackenberg or Tyler Ferguson is the starter? I doubt it.

The great Mike Hlas of the Cedar Rapids Gazette doesn?t think a predicted 4-8 record for Iowa means zip-zip. I agree.

Experiment with Jeff Lewis at safety for #Badgers appears over. Back taking reps at RB.

My take: I guess this means Wisconsin is OK at safety? Or that Lewis couldn?t handle the spot?

My take: Barry Alvarez should lead the committee.

RG Kyle Kalis said out of 120 scrimmage plays, the OL was not cited for 'loafing' once. But they didn't finish enough blocks either.

My take: A work in progress. This unit could be good.

Good production by ESPN. Bill O'Brien thanks you for your free recruiting pitch.

My take: Bill O?Brien is no dummy!

Just finished the OL preview where I mentioned how important health is so of course 1st tweet I see when done is Ted Karras is hurt.

My take: Gulp. Illinois has to hope the injury isn?t serious. He?s its best offensive lineman.