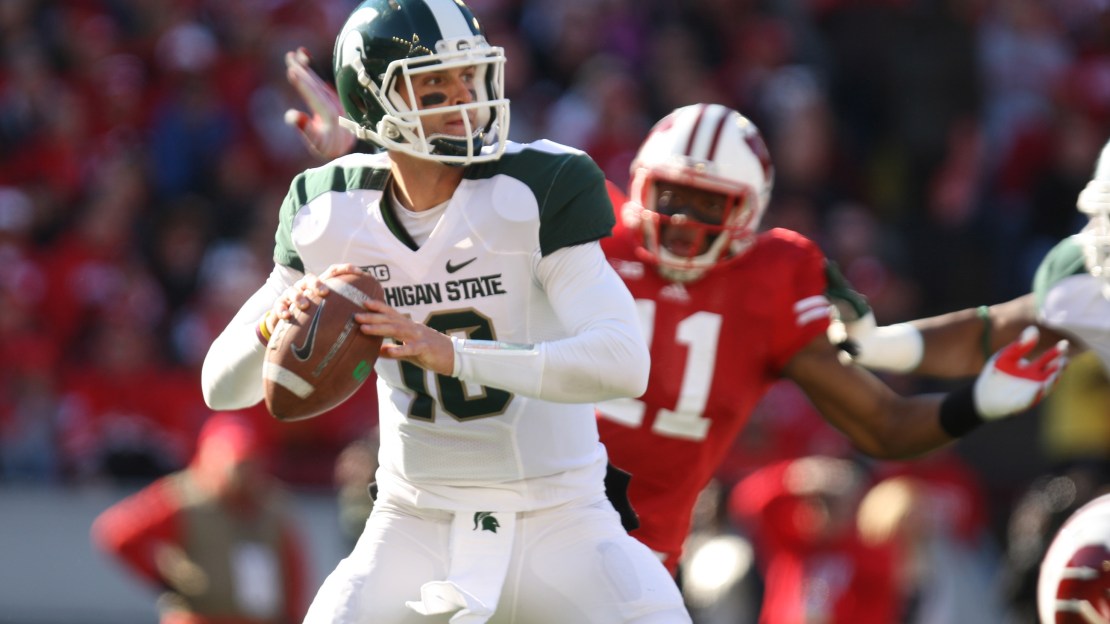 Michigan State?s Mark Dantonio says he now has a four-man quarterback race, with true freshman Damion Terry coming on following a strong showing in a scrimmage.

Well, I find it difficult to think the race is growing this deep into camp. Is Dantonio just trying to keep everyone in the race happy and interested? I don't know for sure. But in the end, I think this will be Andrew Maxwell?s job to lose. MSU can?t afford to turn this offense over to a true freshman-no matter how talented he is.

Nebraska?s Bo Pelini thinks his team has better depth. After watching the Cornhuskers practice, I have to agree.

Everywhere I looked, there was good-looking talent behind the starters. Is this Bo Pelini?s best Huskers? team? It just may be.

Many watched, wondered and waited to see if there would be a shakeup among the Wisconsin receivers in training camp. Well, nothing much has changed after all of these practices.

Jared Abbrederis, Jordan Fredrick and Kenzel Doe are still the Badgers? top-three wideouts-just as they were when camp opened.

Jeff Potrykus of the Milwaukee Journal Sentinel says redshirt freshman Alex Erickson, who was a dual-threat quarterback at Darlington High School and joined UW as a walk-on; senior Jeff Duckworth, whose workload has been in limited in camp because of minor injuries; and freshman Robert Wheelwright also are in the mix.

The Wisconsin defense is what has undergone the most radical change since Gary Andersen took over. And massive Beau Allen finds himself in the middle of it all as the nose tackle in a new 3-4 alignment.

Allen has the perfect body type for this role in the Badgers' defense.

The need for Michigan to rush the passer better is well-documented. Junior defensive end Frank Clark knows he?s a guy the defense is counting on to bring the heat.

As a team, Michigan had just 22 sacks last season, and only 12 from defensive linemen.

Remember when many feared the worst when Michigan LB Jake Ryan hurt an ACL in the spring? Well, it sounds like the guy is doing incredibly well in his rehab.

The great John Bacon has a good book out called ?Fourth and Long.? And in it, there are some not-so-flattering remarks about Nittany Lions A.D. Dave Joyner.

And former assistant Jay Paterno also responds to some disparaging remarks in the book made by Michael Mauti.

This Ohio State defense could be very good. And a reason for that is end Noah Spence, who apparently is embracing a leadership role.

Writes the great Tim May of the Columbus Dispatch, that?s asking a lot from a guy who played intermittently last season in relief of Nathan Williams at the ?Leo? position - the defensive end who sometimes rushes and sometimes drops into coverage - a swing spot that often gives the OSU defense more of a 3-4 look. Spence played in 11 games, registering 12 tackles and just one sack. But in taking over the No. 1 spot in the spring, he had three sacks in the spring game alone. Now he?s expected to not only be a full-time starter, but also serve as an example.

Remember when the running back spot was a black hole for Iowa? No more. The unit teems with talent.

HawkCentral.com notes the bizarre stretch of attrition that has plagued the Iowa running back position for much of Kirk Ferentz?s reign as head coach. The combination of injuries, disciplinary matters and personal issues has caused the demise of many Iowa running backs, especially since the start of the 2010 season. Now there is Mark Weisman, Damon Bullock, Jordan Canzeri and Michael Malloy, among others.

Minnesota receiver Andre McDonald won?t practice the rest of camp. That?s not good, as the receiving corps could have used his help.

With McDonald out of the mix and Derrick Engel healing from a sore groin, the Gophers have cranked up their efforts to convert quarterback recruit Donovahn Jones into a wide receiver. He is a great athlete who must be on the field.

?At [Friday?s] practice, [Jones] just made three or four unbelievable football plays,? Jerry Kill said. ?We?ve spent more time with him at receiver, and we?ve got to sell out and get him to learn receiver; he?s just too good of an athlete.?

On a more positive note, what are chances that Minnesota breaks through in 2013? This chart takes a game-by-game look.

Illinois? Tim Beckman isn?t alone among coaches who are looking for success in year two.

If Beckman can develop decent play in the trenches, Illinois may have a chance to be OK. But myriad questions loom.

And lastly, this from the annals of the just-plain-weird: Iowa got beat in an exhibition hoops game vs. a French team on a last-second shot by former Hawkeye Pierre Pierce.

Iowa SID Steve Roe said UI officials were unaware until entering the gymnasium today that Pierre Pierce would be on the oppposing team.

My take: Would it have mattered?

Gary Andersen saying Tanner McEvoy might see plays at WR. Not sure if that speaks more to his QB skills or #badgers WR predicament.

My take: Probably a little bit of both.

My take: This kid is going to be good.

Bill O'Brien will meet with the media briefly tomorrow. Lines up with his time frame to name a starting QB but I wouldn't hold your breath.

My take: Nope. O?Brien probably will walk the QB decision all the way to the precipice of the opener.

MSU QB coach Brad Salem wouldn't put a depth chart in the QBs. "They're all 1s," he said with a laugh.

My take: Did he wink when he said that?

ESPN has created a new bowl for 2014 that you'll watch only b/c it's football & you're in a pool: the Camellia Bowl. MAC vs. Sun Belt..

My take: Zzzzzzz. What?s the point?

Regardless of what any of us think about Colter, he's gonna play roughly same amount of QB as last year. So debate is kind of moot.