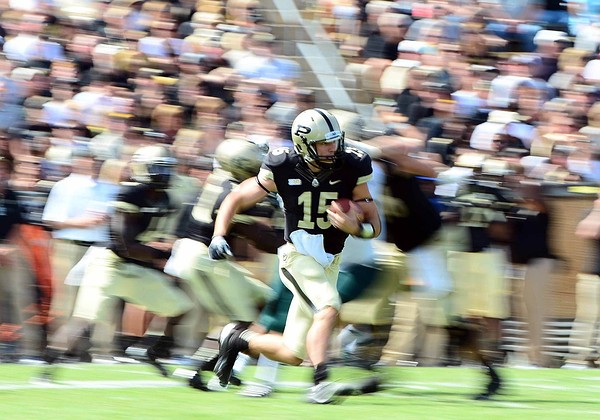 Rookie Purdue coach Darrell Hazell made official what everyone suspected when he named fifth-year senior Rob Henry the starting quarterback.

Henry has been taking the majority of the snaps with the first team throughout training camp, as he has battled redshirt freshman Austin Appleby and true freshman Danny Etling.

In the end, the 23-year-old Henry?s maturity, dual-threat capabilities and superior command of the Boilermaker offense apparently gave him the edge. Known as more of a runner than a passer, Henry has shown an improved arm during training camp operating coordinator John Shoop?s multiple offense.

The 6-2, 205-pound Henry also is a leader, having been voted a co-captain in 2011. He made seven starts in 2010 before suffering a knee injury during camp in 2011 that cost him the starting job and the season. Henry appeared in 11 games in 2012 with no starts and has been in 22 career games. In 2010, he became the first Boilermaker ever to pace the team in passing yards (996) and rushing yards (547) in the same season. Last year, Henry threw for 216 yards and three scores and rushed for 74 yards and a touchdown.

Henry?s experience and athletic ability will come in handy operating a Purdue offense that has a lack of depth at receiver and running back. And Henry?s ability to make something out of nothing could come in handy until a pecking order is established at wideout and in the backfield. Plus, the line has something to prove, too, making Henry?s niftiness that much more valuable.

Henry has completed 53.5 percent of his career passes for 1,212 yards with 11 touchdowns and eight interceptions. He also has rushed 132 times for 621 yards and seven scores.