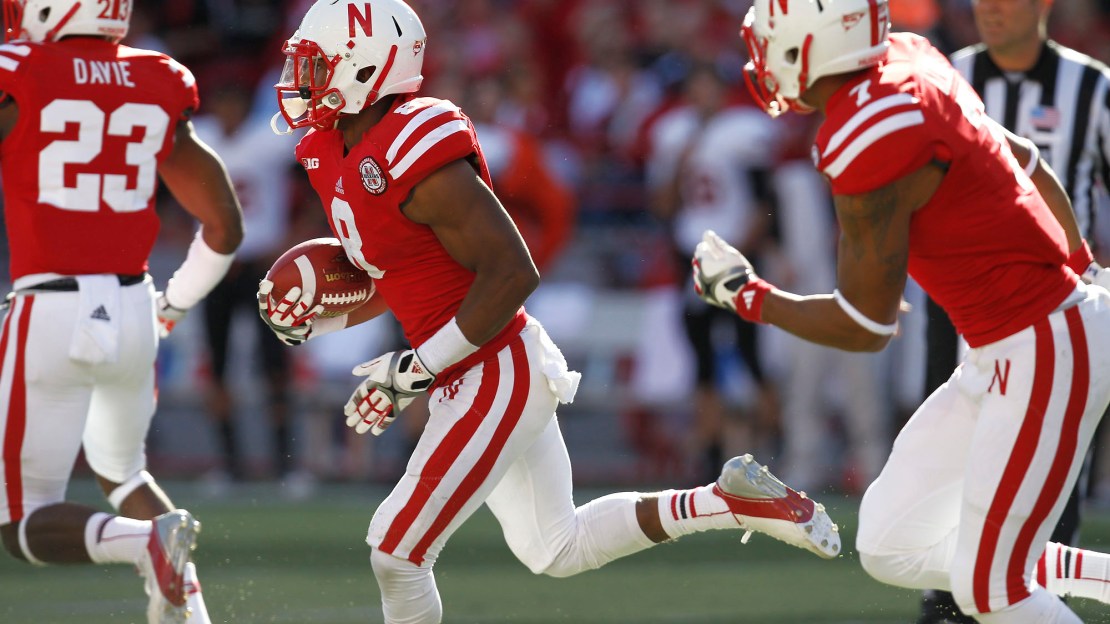 The storylines continue to percolate in training camps across the Big Ten as we inch closer to the start of the season. But, heck, I?m gonna race right past the opening kickoff and on to the Big Ten title game. The great David Jones of PennLive.com ponders the possibility of Northwestern playing Ohio State in the Big Ten championship game. Hey, it could happen.

We will get a preview of that on Oct. 5, when Ohio State visits Evanston for a night game. Will there ever have been a bigger game in the history of Ryan Field?

Abdullah waited his turn. Now, Steve Sipple of the Lincoln Journal Star says he leads a pack of running backs that includes a pair of touted true freshmen — Terrell Newby and Adam Taylor — as well as sophomore Imani Cross. It's not necessarily easy to be patient while awaiting your chance, right, Ameer?

"It's hard to be patient, but you have to be humble," Abdullah told Sipple. "Those guys have been humble so far. I told them, 'Humility takes you a long way. Because if you stay humble, you're always going to stay hungry.' "

There are questions about Illinois? offensive line, no doubt. But the big fellas wanna show they aren?t a weak link.

Could true freshman Shane Morris be the backup quarterback for Michigan? Maybe.

The kid has nice talent. And, honestly, his competition isn?t spectacular.

Yes, there is a lot of buzz about Michigan?s young receivers, but when the Wolverines want a key play, they still look to veteran Drew Dileo.

Among his career-high 20 catches in 2012, Dileo?s standout moment came with four catches for 92 yards in a 12-10 win over Michigan State. Mark Snyder of the Detroit Free Press says it was an example how Dileo is almost always a mismatch from the slot receiver spot, even at 5-feet-10, 180 pounds.

?It?s a lot of room to work, the 5- to 15-yard range is what I excel at against linebackers, nickel backs or safeties, matchups like that,? Dileo told Snyder.

Dileo joins Jeremy Gallon, Joe Reynolds and Jeremy Jackson as the senior leaders among the receivers and is bringing along the younger players, including his backup, Dennis Norfleet. This could be a very good Wolverines unit. Now, the line and back need to step up.

Remember when linebacker Curtis Grant arrived as a five-star recruit at Ohio State? Sure, we all do. He began finally to come emerge last season. Now a junior, Grant may be primed to make a full impact.

The Buckeyes need a healthy and productive Grant. Ohio State has no senior linebackers. Other than junior Ryan Shazier, Grant is the most experienced Buckeyes linebacker, with only three starts.

The experience of Minnesota quarterback Philip Nelson is shining through, as he?s separating himself from Mitch Leidner.

And the Gophers may have struck gold with JC linebackers Damien Wilson and De?Vondre Campbell. Listen to what Jerry Kill has to say:

?They?ve done a great job, both of them. That?s called getting lucky or hard work or whatever in recruiting. De?Vondre can bend and can run and is long, and it?s hard to block him. He?s very focused, doesn?t mess around, football?s important to him.

?Damien — athletically, physically - is a very athletically gifted 250 [pounds], so they both do what you tell them to do, and one of them [Campbell] has three years [of eligibility] left; that?s even better.?

This is great news for the Gophers, who need help-lots of help-at linebacker.

A nice look here at five things to watch for each Big Ten team.

Here is a good video introducing Wisconsin o-line coach T.J. Woods, who coaches the bellwether position in Madison. And it?s a position with some depth issues.

This is sorta interesting: Despite coming off three consecutive Rose Bowl appearances and having lots of promise for 2013, season ticket renewal rates are down for a second season in a row at Wisconsin.

I can?t explain it.

Stewart Mandel of SI.com has an interesting story on the ?nerd? schools: Northwestern, Stanford, Vanderbilt, Duke and Notre Dame.

He looked good on our tour stop. Still, Andrew Maxwell and Connor Cook will be difficult to unseat. But, you never know.

#OSU reports that CB Adam Griffin shoulder surgery this morning and that his career is probably over. He's the son of Archie.

My take: This is too bad.

By the way, in case you haven't heard it enough, Frank Clark is all kinds of huge right now.

My take: He needs to be a stud.

Tim Beck said he decides to add some plays to NU's playbook in the middle of watching other games. Pretty impressive.

My take: The Husker OC is always thinking. He?s one of the best.

Berkley Edwards got some carries with the first-team offense and did some good things, Kill said. No 70-yard bursts to the house, though.

My take: I think the kid could be special.

Tim Beck, on the true fr. RBs Adam Taylor and Terrell Newby: "They work out hard, they play hard and they run hard." Look for both to play.

My take: I?m excited to see both when we visit Nebraska. The Huskers will have some nice options at running back.