Wednesday's links: Who are top 100 seniors in nation? 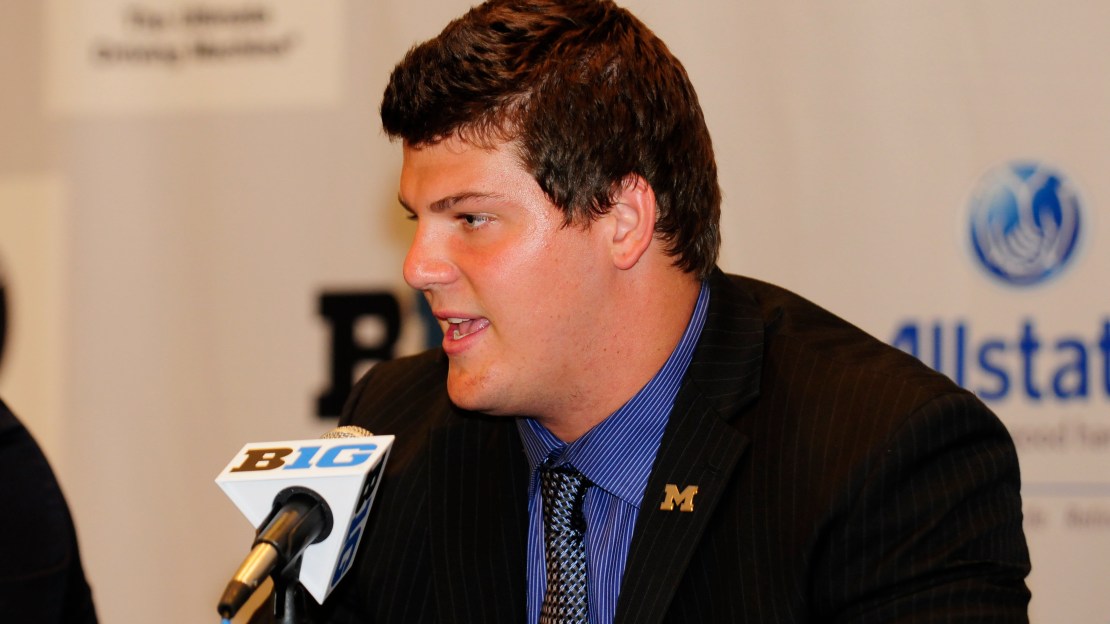 We offer a quick break from the regular training camp content to bring you NFL.com?s Gil Brandt?s list of top 100 seniors in the nation. Take a gander.

There are several Big Ten players on the list. Who?s the highest-ranked Big Ten player? Do you have to ask? Really? OK, it?s Michigan OT Taylor Lewan, who is No. 2 overall. Now, the big fella will perhaps be the top o-lineman in America.

Minnesota wideouts Isaac Fruechte and Derek Engel are looking to continue to prove themselves. Good, because the Golden Gophers need some playmakers at receiver for an offense that needs to hit the big play more often.

The Michigan d-line needs to be watched. The pass rush must improve after the Wolverines ranked ninth in the Big Ten in sacks in 2012. And a push is needed inside. That?s where big Ondre Pipkins comes in. The good news: He says he?s in the best shape of his career.

The big fella moved well when we visited camp after arriving amid big hype. He could be-COULD BE-special. Brady Hoke is pushing him.

If you haven?t heard of Ohio State true freshman running back Dontre Wilson, you need to click here.

Tim May of the Columbus Dispatch says that big plays were his forte at DeSoto, one of the premier big-school football programs in Texas. He rushed for 1,895 yards and 37 touchdowns and caught 37 passes for 750 yards and nine touchdowns.

That versatility is why most every major college program came calling, especially those with spread offenses. He committed to Oregon, but the coach Chip Kelly bolted for the Philadelphia Eagles. That?s when the Buckeyes moved in and Wilson started looking seriously at Ohio State, with offensive coordinator Tom Herman selling him on OSU. Now, the Buckeyes have what looks like one of the most dynamic newcomers in the nation.

Coming off a 4-8 season, Iowa needs improvement at many areas. One of them is the defensive line.

The unit needs some playmakers to step up. One could be big tackle Carl Davis. But who will rush the passer? Drew Ott? Mike Hardy? Dominic Alvis? Touted Faith Ekakitie? You can start worrying now, Herky.

Indiana is hungry to prove something this season.

And, the Hoosiers just may do it. I love the offense and think it will be among the best in the league. The defense? Well, it remains a work in progress, but there is more athletic ability on the field than the last two years-it?s just young. But this could a 6-6 team that reaches a bowl.

More IU: The Hoosiers are loaded at receiver.

Cody Latimer, Kofi Hughes, Shane Wynn ? Indiana has lots of option for what could be the top wideout corps in the Big Ten. Really. There isn?t an abundance of blazing speed-but there is good size.

There is a lot to like about the Michigan State defense. But one area to watch is the line, which has something to prove with some key personnel gone.

"Our first short yardage day wasn't good enough, I don't' know if it was a draw, I'd say we lost," said Narduzzi, whose unit led the Big Ten and finished in the top 10 nationally each of the past two seasons. "But they better win it beyond there."

According to Bob Flounders of PennLive.com, the two wild cards this fall may be defensive ends C.J. Olaniyan and Evan Schwan. Olaniyan is expected to start at one of the end spots. Also, Anthony Zettel and the Lions' coaching staff may take a long look at Schwan now that Brad Bars is out for the season with an Achilles injury.

There is a lot to like about the Nebraska offense. But keep an eye on the o-line, which must pass protect better after the Huskers ranked 90th in sacks allowed.

It also will help if Taylor Martinez gets rid of the ball quicker.

Donovahn Jones has been practicing at both QB and WR since Saturday's scrimmage, #Gophers coach Jerry Kill said today.

My take: He could be an interesting weapon.

Herbstreit says Michigan's offense is back to the future … yeah, that's pretty safe to say.

My take: Michigan is back to being, well, Michigan.

Herbsreit: "not a fan of seeing Ohio State-Michigan Round 2" this year.

My take: Well, if it happens, it could put the kibosh on OSU national title run. It?s hard to beat the same team twice in two weeks.

Penn State football will host San Diego State in 2015 on Sept. 26 per a release.

My take: This is a winnable game. And that?s important for this program at this point.

My take: Good, because this Nebraska defense has something to prove.