Tuesday's links: 'Sky is the limit' for Spartan offense? 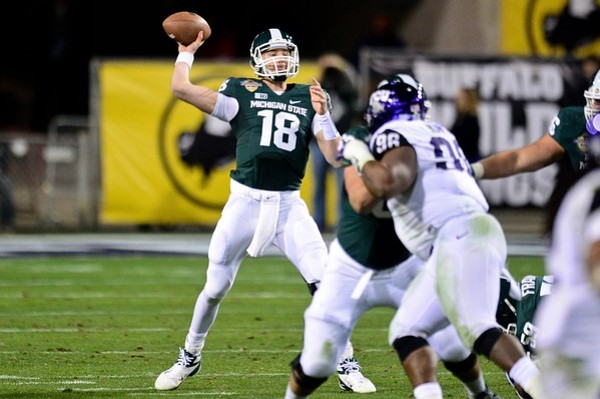 The BTN tour has made six stops already, with one being at Michigan State. Here is a nice photo gallery of Spartans fall camp from MLive.com. This is an impressive looking team that may be getting overlooked.

As for the Spartans offense, quarterback Connor Cook says the sky is the limit.

I agree. I have to think the experience the receiving corps got last year will pay dividends this fall. And that will make the quarterbacks more confident. Plus, the o-line isn?t likely to suffer the injuries it incurred last season, making the front better. Really, the lone area I am a bit concerned about is running back, but there are lots of nice options there, led by Jeremy Langford.

The status of Ohio State cornerback Bradley Roby remains murky after an off-field incident. Will he miss any game time?

No one has said a peep about it in Columbus. But Roby has been working with the second team in practice. Doran Grant is the other starter at cornerback. And those taking reps with him have been sophomore Armani Reeves and freshmen Eli Apple, Cam Burrows and Garson Conley. I think OSU will be more than capable if Roby misses time, as the Buckeyes have a pretty soft non-conference schedule-and plenty of talented options.

What does Michigan boss Brady Hoke want from his players? More power and speed.

"I don't think we're playing as fast as we need to play to be a championship football team," Hoke said at media days. "Every championship team that I've had the privilege of being a part of, they play unbelievably fast and physical on both sides of the ball, and we're not there yet.?

Nick Baumgardner of Mlive.com writes that Michigan lost plenty of talent from its 2012 squad, but it replaces it with arguably more raw physical power and speed than it has had in Hoke's tenure. On paper, and through the eye test, Hoke's 2013 club looks like a Michigan football team. And after watching the Wolverines in camp, it?s easy to see why Baumgardner and others are excited. But I still think this team may be a year away. But does any Big Ten have a brighter future?

Tom Oates of Madison.com thinks Wisconsin?s window of opportunity is still open after three Rose Bowl trips in succession. He? correct, of course.

Oates says athletic director Barry Alvarez having finalized an agreement for a two-game, neutral-site series with LSU gives Wisconsin its best chance in 50 years to become one of the nation?s elite programs. That opportunity isn?t based on the coaching or talent now in the program, says Oates, though that ultimately will be the deciding factor. Instead, it is based entirely on the schedule Wisconsin will play in the 2013, 2014 and 2015 seasons.

Thanks to Alvarez?s bold new approach - the Badgers will open the 2014 and 2016 seasons with LSU and the 2015 season with Alabama - and the Big Ten?s apparent manifest destiny to expand, UW has a three-year window of opportunity to elbow its way to the forefront of college football starting this season.

Wisconsin scrimmaged on Monday. And, well, few answers were provided.

How did the QBs do? Here is what BadgerBlitz.com thought: Joel Stave and Curt Phillips were both good but not great, but Tanner McEvoy really seemed to struggle at times during the scrimmage. And with one scrimmage left before Gary Andersen really wants to narrow down the competition, it seems as though he's running out of time to really wow the coaching staff.

Translation: It looks like this is becoming a two-man race between Stave and Phillips. And my money is on Stave.

This loss stings, as the commitment was from an in-state offensive lineman who had grown up cheering for the Hawkeyes. Players who fit that profile almost always have inked with Iowa. Losing 17 of its last 29 games hurts Iowa?s image, no doubt. But, Signing Day is still months away. Maybe the Hawkeyes can flip the kid back. Maybe.

Illinois had a scrimmage on Monday. And, it went well for the offense, which is good when you consider how much the unit struggled in 2012. The defense? Let?s just say it has some work to do.

Here is a nice Q&A with Nebraska running back Ameer Abdullah from Omaha.com.

More Huskers: What could be key to a big season for quarterback Taylor Martinez? Being patient, says Sam McKewon of Omaha.com.

When I was at Penn State camp, Hackenberg had his moments, but I thought Tyler Ferguson was sharper. And Breneman is talented but caught up in a sea of tight ends in State College. How much will he play with guys like Kyle Carter and Jesse James in tow?

I don?t know about you, but I was a big Randy Walker fan. Here is a nice tribute to the late Northwestern coach who pushed the program forward and was the last Wildcats coach to lead the team to a Big Ten crown (2000). It may happen again this season.

I loved Walker?s intensity and passion. He was tough. And he always was accessible. He also has a nice coaching tree, so his influence continues to course through the veins of the sport today.

My take: Yet another talented running back to add to Wisconsin?s arsenal. And he?s from New Jersey, like Ron Dayne.

Stave has better arm than Phillips but Phillips makes more plays on move & makes better decisions. Coaches tend to like the latter. #Badgers

My take: True, but Phillips? iffy passing concerns me. Remember the Rose Bowl?

My takeaway from the tweets on tonight's practice is that the Illini offense is scoring a lot of points and that they're going to need to.

My take: If the Illinois defense keeps playing like that, for sure.