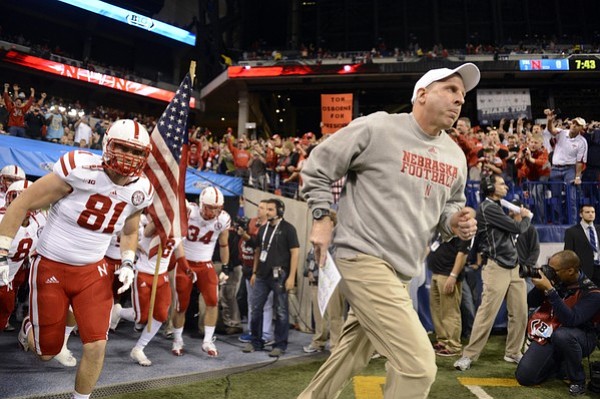 Training camps continue across the Big Ten. And few are as important as the one going on at Nebraska. The great Tom Shatel of the Omaha World-Herald has identified the major talking points for the coming season.

This is a nice read in what is a big season for Bo Pelini?s program. The lack of championships-and some blowout losses-have caused some fans to be skeptical and tread cautiously on the coming season that looks to be filled with great promise. I?m all in-and have been for a while with this year?s team, which I think will win the Legends.

B1G'S BUILDING BOOM: Nice piece by Scott Dochterman of the Cedar Rapids Gazette on the building boom in the Big Ten.

Dochterman points out that since 2001, Big Ten schools have spent more than $1.56 billion on football facility upgrades. Some of the upgrades were deemed vital, such as Iowa?s $89 million stadium renovation that reformed seating in a crumbling south end zone. Others have cosmetic value. But nearly all are designed to give the program an edge - or at least keep up - in recruiting.

TALENTED MICHIGAN BACKFIELD: It was media day at Michigan on Sunday. And, there was a lot to talk about the running back. How fired up is long-time Wolverines assistant Fred Jackson about his ball carriers? He thinks it?s the school?s best collection since the ?glory years.?

There are a lot of nice options with Fitz Toussaint back from injury and touted freshman Derrick Green on campus.

Here is a nice package of images from Michigan media day. You?re welcome.

INTRIGUING QBS: The great Pat Forde of Yahoo! Sports has a list of the 25 most intriguing quarterbacks of 2013.

The great Bill Rabinowitz of the Columbus Dispatch says a unit that didn?t see anyone catch more than 14 passes in 2011 was productive last year. Corey Brown caught 60 passes. Devin Smith averaged 20.6 yards per catch and caught six touchdown passes, including a few spectacular ones.

OHIO STATE DEPTH CHART: And here is Urban Meyer breaking down the Buckeye depth chart. Sounds like there are lots of options in the return game.

KILL'S CONSTANT BATTLE: Great feature by the Minneapolis Star Tribune?s Joe Christensen on Jerry Kill and his battle with epilepsy.

Kill?s battle surely is raising awareness of the disease for others. We all are rooting for Kill. How can?t you be?

MORE MINNESOTA: It looks like Philip Nelson has seized control of the quarterback job. Can?t say that I am shocked.

GOPHER SPEED DEMON: And how about the speed of true freshman RB Berkley Edwards?

He arrived with a fat scrapbook and it looks like he could be a difference-maker for a Gophers? attack that needs some, well, oomph.

Since no one knows who will win the job, Oates looks at what coach Gary Andersen and offensive coordinator Andy Ludwig are seeking for in a quarterback and compare it to the strengths and weaknesses of each player. That might yield some clues as to who will come out on top.

Andersen?s ideal quarterback ?can beat you with his arm, his mind and his legs. I think that carries over to a lot of positions. If you?ve got a tremendous athlete who doesn?t really think too well in the moment and can?t react, it?s a negative. But it?s even more of a highlighted situation, I believe, when you come to quarterbacks. If they can do all three of those, it becomes very difficult to defend that quarterback.?

My money is on Stave, but I think McEvoy has a good shot if he can pick up the offense quickly.

HOW ABOUT THE UW SECONDARY? The Wisconsin secondary has a lot of questions. Safety Dezmen Southward isn?t one of them.

IT'S UP, IT'S GOOD! How accurate is Northwestern kicker Jeff Budzien? Check out this video. Ridiculous.

WHAT AIRBHG?! After dealing with injuries, transfers and just plain bad luck at running back in recent years, Iowa now can call the position a strength. Really.

Chris Carter: "I can't imagine being anything but a Silver Bullet." Safe to say he's happy being on defense now.

My take: If the guy plays hard all the time, he could be special.

Dontre Wilson says he's being used as a starter on kickoff returns. #Buckeyes

My take: Why not? He should get the ball as often as possible.

My take: Wisconsin never gets enough credit for what it accomplishes.

More Fred Jackson: "When it was 3rd and 1 last year, sometimes we didn't get it. That's not going to happen anymore."

My take: Thank Derrick Green for that.

This #Northwestern O-line can play. OL and LB two of the most polished groups from week one.

My take: The athleticism at linebacker impresses me.

Hazell on Mostert: "We've got to see how physical he is with the ball in his hands and how well he reads the defense" #Purdue

My take: Purdue could benefit from getting the ball to this speedster.