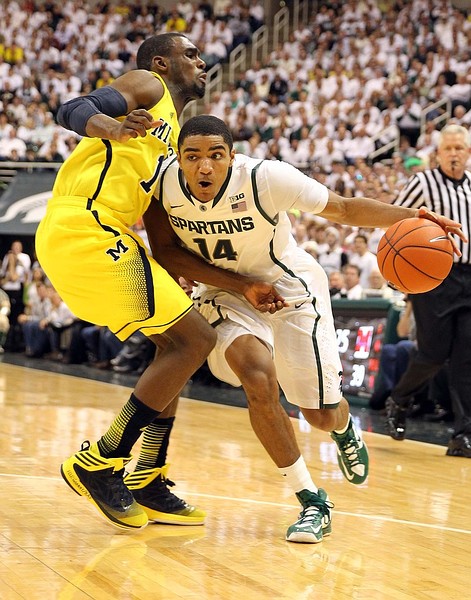 There is no doubt that the 2014 NBA Draft will feature one of the most celebrated draft classes in NBA history. In addition to a talented core of college players returning to the hardwood next season, the much-heralded 2014 freshman class is expected to be one of the best in recent memory.

So where do next season's Big Ten stars fall into the mix?

*Michigan State's Adreian Payne and Branden Dawson are both listed in the "next five in" category.

It's hard to argue with the top three guys on this list, as really, Harris, Robinson III and McGary could end up anywhere in the 5-20 range, assuming they all stay healthy. All three could have been first round selections had they chosen  to make the jump this past year, but the hope is that they can each improve their draft stock with another year of college under their belt. Not to mention, both Michigan and Michigan State should be in the running for a Big Ten Championship and a potential deep run in the NCAA Tournament, which can certainly help boost their draft stock as well.

The next two guys on the list, Dekker and Ross, are a bit surprising. Don't get me wrong, Dekker is an exceptional talent, and should be poised for a breakout sophomore season. But how often do you see players under Bo Ryan jet for the NBA after just two seasons?

Ross is an intriguing player, who very-well could be the top scoring option in Columbus this season after Deshaun Thomas departed for the NBA. Playing along side Aaron Craft can make just about any player look pretty darn good, especially a guy who can score in bunches like Ross. However, it takes more than just scoring ability to be selected high in the NBA Draft. Just ask Thomas, who despite leading the Big Ten in scoring with a 19.8 PPG clip last season, fell all the way to No. 58 in this past June's draft.