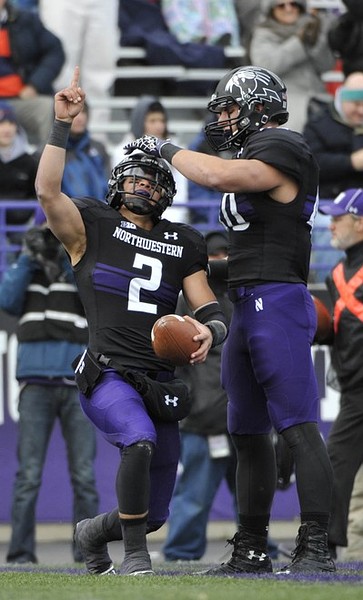 We?re 17 days from the 2013 football season kicking off. Indiana (Indiana State) and Minnesota (UNLV) get things started for the Big Ten on Thursday, Aug. 29 on BTN/BTN2Go. To help count down the days to kickoff, BTN.com is ranking the top 25 players. Join us as we count it down, from 25-1, every day.

How dynamic is Northwestern's do-it-all star? Put it this way: Colter has the athleticism, speed, agility and hands to also be one of the Big Ten's better running backs or receivers – if need be. But Pat Fitzgerald likes to use his versatile and unselfish athlete under center, where he can use his legs and improving arm to hurt foes. The fact Fitzgerald rotates strong-armed Trevor Siemian at quarterback is no knock on Colter, either. In fact, the rotation makes the offense that much more dangerous and unpredictable, as Siemian is the superior passer and the set-up allows Colter to flash his other skills. Like, for example, as a rusher (1,691 yards, 23 TDs) or a receiver (667 yards, 3 TDs). Add it all up, and Colter is one of the Big Ten's most versatile players in recent history.

And his rushing/receiving stats: