B1G web links: You see what Badgers coaches did? 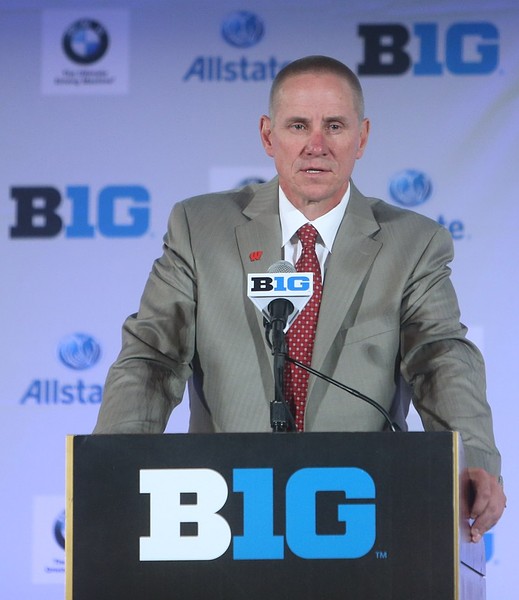 This is pretty cool: Wisconsin coaches voiced over videos to help players learn during the summer, when coaches can?t coach players.

Gary Andersen?s first staff created a package of clips that included voice-overs from assistants. NCAA rules limit contact between coaches and players during the summer, so Andersen and his assistants improvised in order to get the most out of the offseason.

MICHIGAN O-LINE: The Michigan offensive line is taking shape, with Kyle Kalis and Ben Braden primed to assume the guards spots alongside returning starting tackles Taylor Lewan and Michael Schofield. But the center spot remains in flux with Jack Miller and Graham Glasgow, a walk-on, battling.

Keep an eye on this key competition for a line that has something to prove after an uneven 2012.

PENSICK READY TO SNAP: Michigan isn?t the only squad with an issue at center. Nebraska needs a snapper. And Cole Pensick hopes he?s the guy.

MORE CENTER TALK: Purdue?s offensive line has questions. But center Robert Kugler isn?t one of them. The sophomore is poised to be a leader-and perhaps the unit?s best player.

TRIPLE H LOOK-ALIKE: Not only does sophomore Taylor Decker look capable of starting at right tackle, the one hole on the Ohio State offensive line, but he also looks like WWE superstar Triple H. Decker almost won the job as a true freshman last season, when the o-line was a question in training camp. Now, the front is a major strength in Columbus.

?He's coming along great,? guard Andrew Norwell said to the media after a recent practice. ?He's improved a lot since spring ball. He's gotten stronger, faster, so I've got no problem with him playing tackle for us. I think he's a great addition.?

WATCH THIS SPEEDY BACK: Ohio State already has a batch of good running backs, with Carlos Hyde, Rod Smith and Bri?onte Dunn-among others. Well, it looks like the running back corps will be bolstered by freshman Dontre Wilson, who is looking like a rising force.

?He?s got something that we didn?t have, and that?s just electric speed,? Urban Meyer said after a practice. ?And he doesn?t care, he just goes hard. … He?s got jets.?

Wilson was headed to Oregon until Chip Kelly left to coach the Philadelphia Eagles. Ohio State swooped in and got the big-play kid.

NATIONAL TITLE CONTENDERS? Are the Wolverines a dark-horse national title contender? Athlon thinks so. I don?t. I think Michigan is a year away from this. The running game and defensive line cause me concern.

ROLAND BACK AT IT: The Minnesota defense needs to take the proverbial next step in its development. And the return of tackle Roland Johnson helps.

Johnson played 10 games as a reserve in 2012 after arriving from a JC, making seven tackles and recovering a fumble. But Johnson had a teammate accidentally roll into his left knee, tearing an anterior cruciate ligament. Johnson had reconstructive surgery and missed spring practice. But he says he?s back to 100 percent.

We shall see. Groy has looked good earlier in his career. He has 15 career starts; two starts at left guard, including 12 last season. But Groy has only two starts at left tackle, both last season in place of injured starter Rick Wagner. Groy-the Badgers? most athletic lineman–has as many starts at fullback, two as a redshirt freshman in 2010, as he does at left tackle. Still, most think he will do just fine. Me, too.

WHAT ABOUT TAIWAN AT RB? Michigan State?s yawning need for a running back is well-documented. Would the Spartans consider moving LB Taiwan Jones to RB?

Hmmm. He would be physical presence in the backfield, which is what Mark Dantonio likes. It?s not likely, but ?

My take: He needs something better than that.

Wisconsin football spends $72,475 on 130 iPads that now serve as play books. Works out to $558 apiece. What's the penalty for losing one?

My take: I shudder to think.

My take: The Wildcats can use him.

#Gophers secondary has a goal this year to force 20 turnovers by itself. DBs came up with 12 TOs (11 INTs and 1 fumble) last season.

My take: It could happen, as this will be a solid secondary once again.