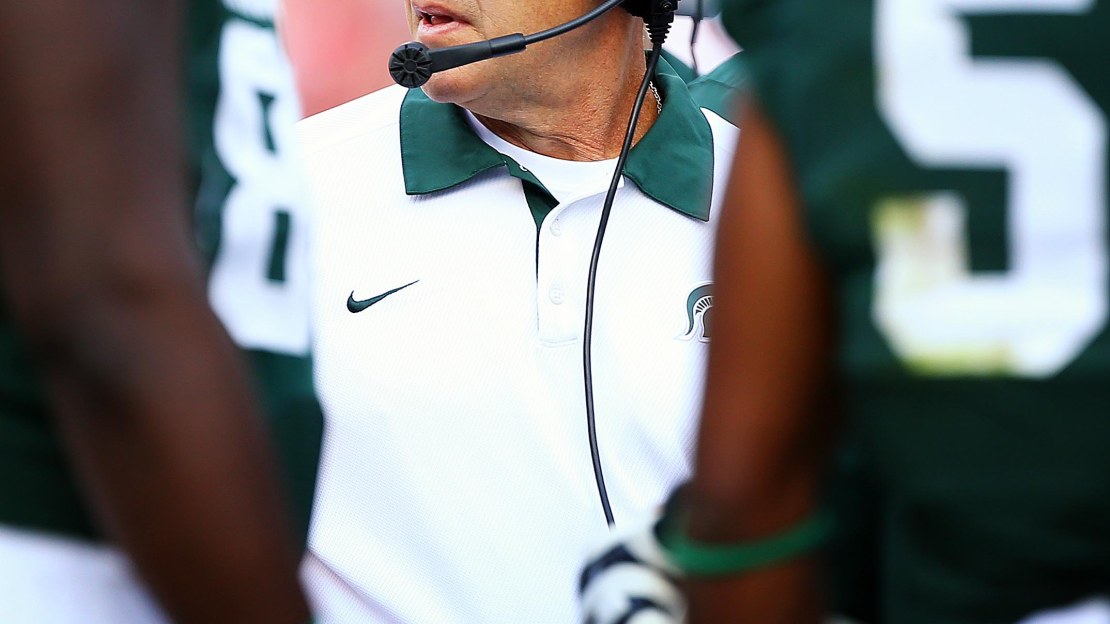 Training camps are buzzing across the Big Ten. Where to begin? How about East Lansing? One of the biggest issues facing Michigan State in its camp is the search for a running back with Le?Veon Bell gone a year early. (Was there a bigger loss for any Big Ten team?) Co-offensive coordinator Dave Warner shares his early impressions of the freshmen backs here.

Delton Williams, Gerald Holmes and R.J. Shelton bring big credentials to campus. Holmes purportedly may be the best of the trio. But it was Williams whom Mark Dantonio said reminded him of Bell. (What? A bit hasty, if you ask me.) Williams and Holmes are big backs; Shelton is the fastest. Stay tuned. I will be stunned if Riley Bullough is still starting in October.

MORE PENN STATE: And Audrey Snyder of PennLive.com has a video look at the Nittany Lions? first practice.

It will be interesting to see how Adrian Amos is used. A safety by trade, Amos could be used some at linebacker. This defense could be very good.

LEWAN'S MISSION: Michigan offensive tackle Taylor Lewan surprised many when he opted to return for his senior season. And, after reading this, you can see he is focused to do something big.

In case you are wondering, Michigan hasn?t won the Big Ten since 2004.

TALKING MINNESOTA ATHLETES: If the great Sid Hartman of the Minneapolis Star-Tribune sees the athleticism in Minnesota, then you know it?s there.

Jerry Kill is making progress-and this will be his best team as Year Three dawns. But it may not show up in his record this fall because of the rugged Legends Division. Be patient, Goldy. Please.

True. The Buckeyes? biggest foe may be themselves. And, as BTN analyst Chuck Long told me, OSU can?t play not to lose; it must play to win. Can this team go unbeaten again? I have my doubts.

NEBRASKA'S MUCH-TALKED-ABOUT D: Sam McKewon of the Omaha World-Herald thinks the pieces are in place for Nebraska?s defense to hold up.

I have been saying this for a while. I think JC end Randy Gregory will be special coming off the edge, likewise mammoth redshirt freshman tackle Vincent Valentine. And the raft of young linebackers is promising-David Santos, Jared Afalava, Michael Rose et al. The promise/potential is all there, people.

FITZ READY TO GO: Michigan?s Fitz Toussaint says he?s gonna be the starting running back in the opener coming off injury that ended his season early. That?s good enough for me. In fact, I think it would be the best thing for the offense if that happens.

As linebacker Cam Gordon put it Monday: ?Fitz, he wants to be like Adrian Peterson (recovery-wise), and I feel like that?s the type of year he should have. I?m not going to say as far as yards, but as far as motivation, yeah.?

WILDCATS ON THE LINE: The skill positions at Northwestern are loaded with experience. But the line? It has some questions. In fact, it will be one of the most hotly contested spots in camp with three starters gone.

The big boys hold the key to what could be a special season in Evanston.

PURDUE'S MONEY: The great Mike Carmin of the Lafayette Journal Courier takes a good look at where the money comes from to help fund the Purdue athletic department.

Check out the opening salvo in his story: ?One year before BTN launched, the Big Ten Conference distributed about $14 million to each of its 11 schools. That was 2006-07. Six years later, that figure has jumped to more than $25 million. What will Purdue University and other league schools receive during the next four years? Even more money. A lot more.?

Not sourced, but my educated guess is Penn State has a starting QB named some time between the 14th and the 17th.

My take: Mark it down.

My take: This guy is gonna be good.

QB Club has given every #Illini player his own iPad for film and playbook study. Nice donation by the fan support group. #dechr

My take: Nice perk. I wonder how many other schools will follow suit?

#Purdue coach Darrell Hazell said three WRs who are standing out so far in camp: Macarthy, Anthrop and Knauf.

My take: Keep an eye on Danny Anthrop, who could become a key player because of his speed for a unit that?s desperate for playmakers.