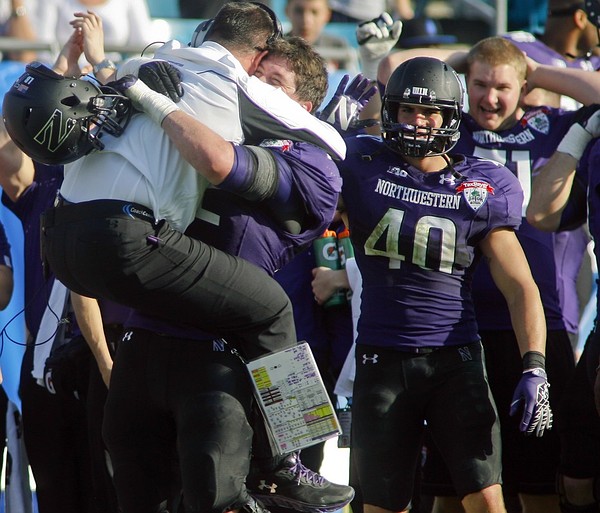 BTN/BTN2Go is airing the top 10 football games of 2012, and the countdown is at No. 6: Northwestern's historic bowl win over Mississippi State. Watch the game at 8 p.m. ET tonight, and the remaining five games at the same time through Aug. 11. Until then, relive the thrilling game in this post.

Behind huge interceptions early and late, No. 21 Northwestern beat Mississippi State 34-20 in the Gator Bowl on Tuesday and snapped the game's longest postseason losing streak. The Wildcats (10-3) won their first bowl game since 1949, snapping a nine-game funk that was tied for the longest in NCAA history. They also celebrated double-digit victories for the first time since the 1995 Rose Bowl season. Get the AP recap, video and Tom Dienhart's Snap Reactions in this post.

1. How about that Northwestern defense? The unit made some nice strides all season under coordinator Mike Hankwitz and may have played it best game of the season today in the Gator Bowl. The Wildcats allowed only 293 yards and generated four turnovers. And Mississippi State went just 1-of-11 on third downs with only 106 yards passing.

2. As they had most of the season, Northwestern excelled on the ground behind the running of Venric Mark and Kain Colter. The duo notched 162 yards on the ground for an offense that went 10-of-19 on third downs. The Wildcats heard for weeks about the bigger, tougher and better SEC. Well, it wasn?t on this day in Jacksonville.

3. Mississippi State quarterback Tyler Russell was off his game–WAY off this game, tossing four interceptions with three coming in the first half. He hit just 12-of-28 passes for 106 yards. Russell?s generosity played a big role in Northwestern ending a dubious nine-game bowl losing streak (which was tied for the longest in NCAA history) that dated to a win in the 1949 Rose Bowl. Things looked a bit dicey for NU when Mississippi State tied the game 13-13 early in the third quarter before outscoring the Bulldogs, 21-7, down the stretch. Just think of how great this season could have been had Northwestern not blow leads in all three of its losses (at Penn State, Nebraska, at Michigan).

Trevor Siemian scores on a keeper: