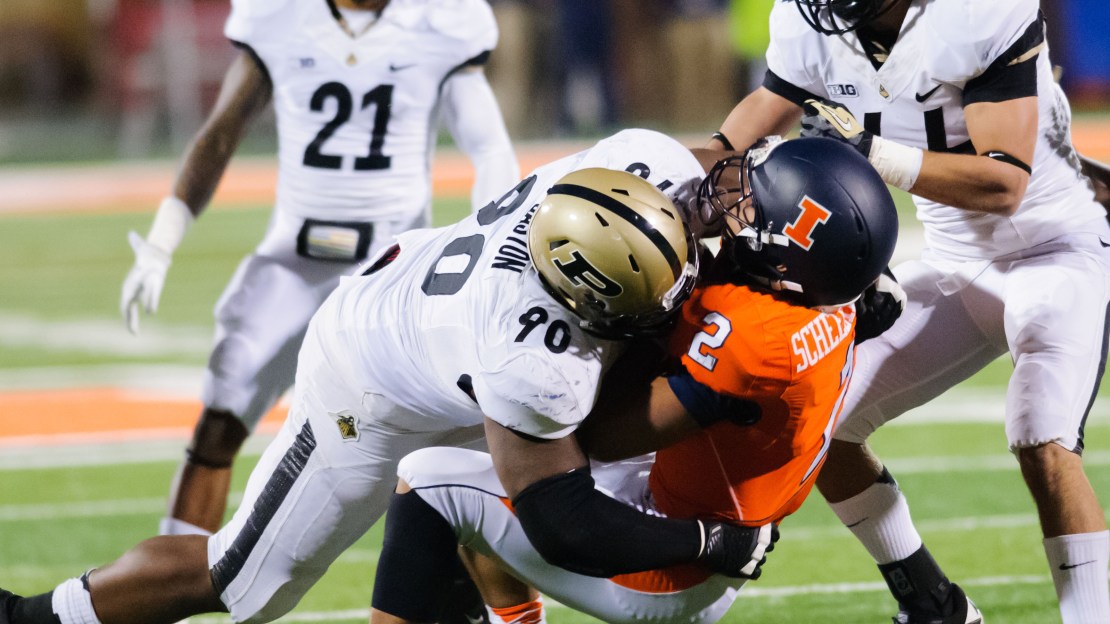 The arrival of Darrell Hazell from Kent State has energized Purdue and given fans hope for the future. He inherits a team that went to a bowl last season under Danny Hope, but the roster is still a bit talent poor. Regardless, Hazell has a nice plan and a strong staff. Here is my best- and worst-case scenarios for the Boilermakers.

Best case: It?s a battle of debuts in the opener, with Darrell Hazell taking on new Cincinnati boss Tommy Tuberville. The Boilermakers find a way to win late on a field goal. That mojo carries over into a blowout victory vs. FCS Indiana State. But a visit from Notre Dame ends the party; and a subsequent trip to Wisconsin brings more misery. The Fighting Irish have had their way with the Boilermakers of late, winning the last five meetings-and seven of eight. The Badgers haven?t just beaten Purdue in recent years; they have absolutely clobbered the Boilermakers, winning seven in a row. In that stretch, the Boilermakers have scored 20 points in a game just once. And every Badger win but one has been by double-digits. The Boilers get back on track-barely-at home vs. a tough Northern Illinois team. Nebraska comes to West Lafayette for the first time since 1958-and wins, easily. Sporting a 3-3 mark with the season threatening to teeter out of control, Purdue stuns Michigan State in East Lansing where it hasn?t won since 2006. That excitement dissipates quickly with a visit from Ohio State, which has lost its last two in Ross-Ade Stadium and three of its last four. But this time the Buckeyes roll. The Boilermakers need to win two of their last four games to become bowl eligible for a second season in a row. Not only does Purdue do that, but it wins all four – vs. Iowa, at Penn State; vs. Illinois; at Indiana – to finish 8-4 overall and 5-3 in the Big Ten. Hazell earns some Big Ten coach of the year accolades.

Worst case: No Big Ten team has a tougher opener than Purdue, which travels to Big East co-champ Cincinnati-and loses to a Bearcat team that went 10-3 in 2012. The Boilermakers come home and squeak by a good Indiana State team. A visit from Notre Dame and trip to Wisconsin are slaps in the face. Purdue hasn?t beaten the Irish since 2007 (in WL) and last won in Madison in 2003. The Boilermakers? misery continues with a visit from Northern Illinois, which is coming off an Orange Bowl appearance and won the last time it visited Purdue (2009). The losing skid reaches six games with defeats vs. Nebraska; at Michigan State; vs. Ohio State. The loss to the Buckeyes is Purdue?s seventh and ends its bowl dreams. Iowa has won five of the last seven meetings vs. Purdue but lost to the Boilers last year in Iowa City. And the slumping Hawkeyes lose again, giving Purdue a much-needed triumph. Next is a trip to Penn State, which has won six in a row vs. Purdue and where the Boilers haven?t won since 2004; chalk up another loss. But the Boilermakers continue to play for pride, knocking off visiting Illinois for the eighth time in the last nine encounters. The season ends on a downer by losing the Old Oaken Bucket at surging Indiana, which entered the game having lost 13 of the previous 16 meetings. A 3-9 overall mark (2-6 Big Ten) gives Darrell Hazell lots of teaching points for 2014.