Monday's links: All the latest from Big Ten camps 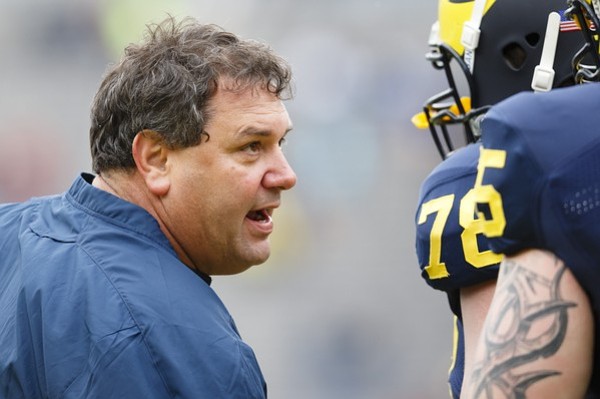 Camps are open around the Big Ten as the 2013 season approaches fast, so there is a lot going on from Lincoln to State College. Let?s start at Michigan with a look at five position battles to watch in camp.

The battle for the third receiver spot intrigues me. Who will start alongside Jeremy Gallon and Drew Dielo? Will it be Amara Darboh? Jehu Chesson? Jeremy Jackson? Hmmmm.

WOLVERINES TO WATCH: And here are five Wolverine freshmen to watch, according to the great Mark Snyder of the Detroit Free Press.

RB Derrick Green is the man. And DE Taco Charlton could be a factor off the edge. I can?t wait to see these guys in action on the tour.

WHO TO WATCH AT NEBRASKA: Staying in the position battle vain, here are five to watch at Nebraska.

Defensive line is most intriguing. Aside from end Jason Ankrah, no one else up front is really proven. Right now, there is a sea of names at this oh-so-critical position. I wanna see redshirt freshmen like Greg McMullen, Avery Moss, Aaron Curry and Vincent Valentine. And how will touted JC end Randy Gregory look?

PREDICTING HACKENBERG: The gang at Athlon Sports predicts that Christian Hackenberg will win the Penn State quarterback job. They are correct, of course.

QUESTIONS FOR PENN STATE: Rich Scarcella of the Reading Eagle has his 10 questions facing Penn State.

Yes, QB is No. 1. But how much will comprised depth impact the Nittany Lions?

A LOOK BACK AT NEBRASKA: With all the talk of a super-charged Nebraska offense, Tom Shatel of the Omaha World Herald takes a look back to 30 years ago, when the Cornhuskers had one of college football?s great attacks ever.

While the Husker offense looks primed for historic heights, a defense with just four starters back is littered with questions. Can a unit that was battered at times in 2012 and will rely on numerous youngsters excel this fall?

SPARTANS SKILL GUYS: Michigan State has a lot to sort out at the skill positions in training camp, with four quarterbacks, seven running backs and a gaggle of receivers.

One development: true freshman running back Delton Williams is now listed as a running back/linebacker.

OHIO STATE THREATS: The great Bill Rabinowitz of the Columbus Dispatch has a nice piece that tells us Ohio State has more offensive threats than just Braxton Miller.

There is hybrid slot man Jordan Hall, wideouts Philly Brown and Devin Smith, running back Rod Smith and tight ends Jeff Heuerman and Nick Vannett-among others. Still, Miller is the one who stirs the drink. Without him, how good would this attack be?

TALKING BUCKEYES: And you?ll wanna check out this back-and-forth between Rabinowitz and Tim May, who discuss the coming season for Ohio State.

I am intrigued most by the move from a 4-3 to a 3-4 defense that will be much more aggressive. I also wanna see how the receiving corps and secondary take shape.

MINNESOTA FOOTBALL VIDEO: Here is a nice look at the coming Minnesota season in video form from the Minneapolis Star Tribune.

Speaking of the Golden Gophers, RB Donnell Kirkwood is looking for a breakout season. Minnesota needs more big plays from the backfield. A better line will help, no doubt.

And Minnesota knows who its Nos. 1 and 2 quarterbacks will be. But who will be No. 3?

PURDUE PRACTICE THOUGHTS: Here are some quick takes on Purdue?s first practice from Mike Carmin of the Lafayette Journal Courier.

I know you are wondering, so here you go: Quarterback Rob Henry ran with first team; Danny Etling with the second team-but it will flip-flop. The receiver position also drips with intrigue. Darrell Hazell would like to find six among a largely faceless group of candidates. I don?t know if there are six.

Penn State's Dave Robinson about to be inducted into the NFL Hall of Fame. Only the sixth Nittany Lion to make the hall.

My take: I guess I would have thought there would be more.

My take: Still some time for fun.

That's Michael Geiger, of Toledo. He was ranked the No. 1 high school kicker in America by http://t.co/gzNM3hFvq7

My take: I have to think he?ll be kicking when the season opens.

And yes Dontre Wilson, the speedy back from Desoto TX looked speedy. But so did qb JT Barrett and RB Ezekiel Elliott.

My take: I can?t wait to see Wilson and Elliott.

Keenan Davis just matched his touchdown total at Iowa from last year with that TD catch. Still can't believe he only had one TD last year.

My take: Thousands of Iowa fans are still miffed, too.

This is the second summer I've heard college basketball coaches call someone "a Youtube player" – lots of highlights, not enough substance.

My take: I must adopt this term. It is brilliant.

Freshman QB Danny Etling got most of reps with 1s today. Rob Henry got them yesterday. Hazell wants 50-50 reps until starter named.

My take: Gonna be a good race. I would like to see Purdue go with the freshman, Etling.