BTN Tour preview: What I'm looking for along the way 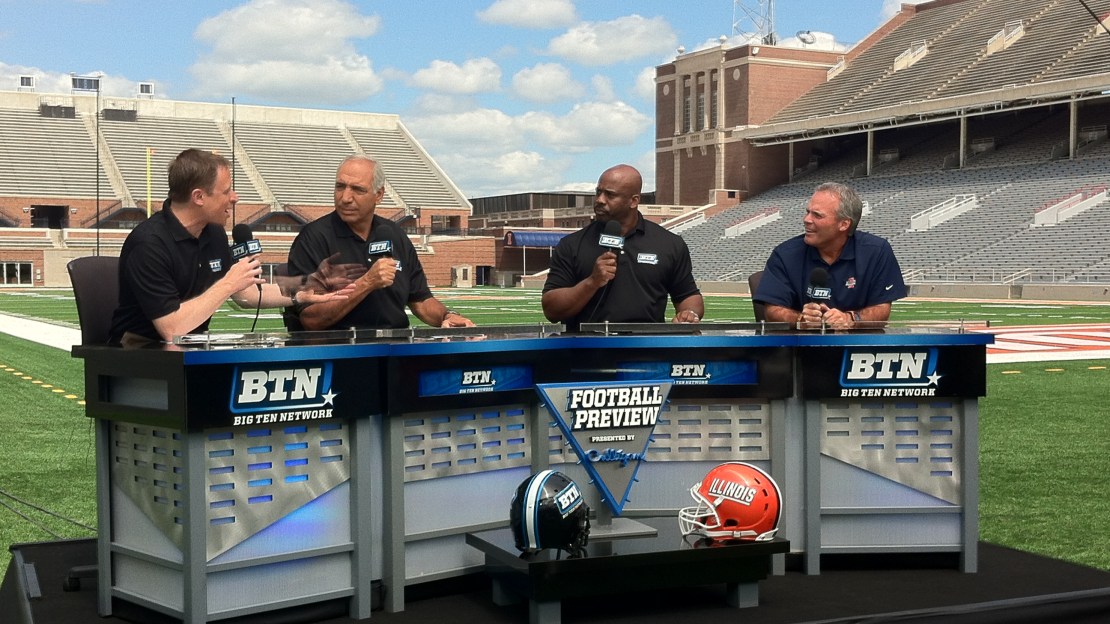 It?s about time for me to kiss my son, Calvin; daughter, Veronica; and wife, Robin, goodbye. I also need to rub my dog Gizmo?s ample belly one last time before I finish packing my bags.

And, like all busses, the cool kids sit in back. That?s where you?ll find Dave Revsine, Gerry DiNardo and Howard Griffith. Me? I?ll be up front, dreaming of back-of-the-bus glory, calling coaches and media on my iPhone and researching teams on my company-issued HP EliteBook laptop.

But I do venture to the rear of the bus on occasion to snatch one of Revsine?s sugar-free Red Bulls from the college-boy fridge.

Our first stop: Bloomington, Ind., on Aug. 6. Our last stop? Iowa City, Iowa, on Aug. 20. In between, we?ll hit the other 10 campuses, stopping often for food, fuel and fun at some truckstops on some stretches of faceless interstate is some Midwestern states.

No one has a better selection of mesh ball caps and bottle rockets. But the reason for our arduous junket goes beyond truckstop stops and eating at neat campus joints like Zingerman?s in Ann Arbor, State Street Brats in Madison, Wig and Pen in Iowa City, Misty?s in Lincoln, The Varsity Club in Columbus and Bruno?s in West Lafayette. And, of course, DeAngelo?s in Bloomington, which is owned by BTN?s own Gerry DiNardo.

Nope. The reason for our junket is to kick the tires one last time on each Big Ten team during training camp. And here?s what I?ll be looking for at each stop. Come along!

ILLINOIS
Where do I begin? The entire program drips with storylines coming off a 2-10 season and riding a dubious 14-game Big Ten losing skid. But I will focus on an offense that was bad. Really bad. Really, really bad. Credit embattled Tim Beckman for making a prudent hire in offensive coordinator Bill Cubit. If anyone can bring calm to this chaos, it?s Cubit. The ex-Western Michigan coach has some weapons to work with, including a senior quarterback, and has installed a downhill rushing style. I like the potential.

INDIANA
It?s true-the hype you keep reading and hearing about Hoosier football is legit. Indiana could get to its first bowl since 2007, based on its killer offense alone. But, the defense still must do its part. How does it look? Specifically, the d-line, which lost some key tackles? Indiana never will have a steel curtain, but it has to be more than a speed bump to opposing offenses.

IOWA
Do you have to ask? It?s the offense, Herky. It was riddled with dysfunction last season during a dreary 4-8 season that left even the most ardent Hawkeye fans in black-and-gold bib overalls muttering to themselves. I?ll be looking to see how much no-huddle, up-tempo stuff coordinator Greg Davis is running. And the quarterback situation teems with intrigue. Who will it be? Jake Rudock? C.J. Beathard? Cody Sokol? None are Chuck Long; but can one be, say, Kyle McCann?

MICHIGAN
I?m going right to the defensive line. This group has to get a push and bag some quarterbacks. It hasn?t happened often enough since Brady Hoke moved to town and unpacked all of his short-sleeved shirts. Sit down before reading this: The Wolverines averaged 1.69 sacks last year, which ranked 80th in the America. That's a big drop from 2011, when Michigan averaged 2.31 sacks to rank 30th in the nation. I have heard lots of yammering about DE Frank Clark. I wanna see this fella get after it. I?ll also be looking for Mario Ojemudia.

MICHIGAN STATE
Will any team miss a player more than the Spartans will miss RB Le?Veon Bell? Of course not. So, whose gonna tote the rock in East Lansing? You know Mark Dantonio wants a workhorse to push the pile and punish defenses. Stunningly, redshirt freshman Riley Bullough looks like he?ll get the first crack. Why is this stunning? Because, well, Bullough spent last year at linebacker. I wanna see these three freshman backs, especially Gerald Holmes. R.J. Shelton and Delton Williams are the others. I think the ship may have sailed on holdovers Nick Hill and Jeremy Langford.

MINNESOTA
The Gophers are looking for a breakthrough. Well, it won?t happen unless the defense continues to improve. And I?m gonna scrutinize the linebackers. Aaron Hill? Damien Wilson? James Manuel? Those are the projected starters for a unit that rarely has been a strength in Dinkytown in my lifetime. Depth? Oh, it?s shaky. And I?ll be sure to check out the receivers. Some defense-stretchers are needed. Let me type that again: Some defense -are needed. Jamel Harbison intrigues me.

NEBRASKA
Defense. Defense. Defense. Did I mention I?m gonna be watching the Cornhusker defense? Yes, me and the rest of the galaxy. It only holds the entire key to what is an oh-so-critical season in Lincoln for Bo Pelini. I will scrutinize the front seven, in particular. Up front, I wanna see Jason Ankrah, Avery Moss and Randy Gregory coming off the edge. Inside, I wanna see tackles Thad Randle, Vincent Valentine, Aaron Curry and Kevin Williams get a push. I?ll also be sure to watch young linebackers like Michael Rose, David Santos and Jared Afalava. And is Zaire Anderson coming on, too? Fascinating.

NORTHWESTERN
I?ll be looking for swagger. Yes, that?s right: swagger. You know, the stuff you see at places like Miami (Fla.), USC, Texas, Ohio State and Alabama. This is supposed to be the best Wildcats team in, well, forever. Are they practicing like it? Are they passing the eyeball test? Are they acting like it? The speed and athletic ability on defense is purportedly off the charts by NU standards. I wanna see it from guys like LB Chi Chi Ariguzo, S Ibraheim Campbell and E Tyler Scott-among others.

OHIO STATE
The Buckeyes are like a super model staring into the mirror, looking for a facial flaw. Well, there really is nothing major. This team?s biggest foe may be itself. Can the Buckeyes stay hungry? Will they play not to lose instead of playing to win? I likely won?t be able to decipher those things in August. So, I?ll be watching a revamped d-line that will have four new starters-and each one is a purported stud. I love watching big guys who can move and play hard. This is gonna be fun. Adolophus Washington is supposed to be the new stud.

PENN STATE
Me and about 784,230 other people-maybe a few more than that, even-will be riveted to the quarterback competition between JC transfer Tyler Ferguson and hotshot freshman Christian Hackenberg. (Will Hackenberg be wearing a red cape?) The rest of the offense is set. I?ll also sneak a long peek at the defensive tackles, which are as big a worry as the quarterbacks. DaQuan Jones and Kyle Baublitz need to excel. Ditto redshirt freshmen Austin Johnson and Derek Dowrey.

PURDUE
The offense. What will it look like? I?ve heard and read a lot-some two-back power ? some one-back ? some spread. ? basically, the Boilermaker offense will have elements of about every offense known to man. But, any coach worth his whistle knows you must have an offensive identity. I?m guessing Purdue?s will be a work in progress, depending on who wins the quarterback job between Rob Henry and Danny Etling, who I hope wins it.

WISCONSIN
If you guessed ?quarterback,? you guessed right. Go pick out a block of Colby jack cheese as a prize. It?s sophomore Joel Stave vs. sixth-year senior Curt Phillips vs. JC transfer Tanner McEvoy. Got all of that? I think it?ll come down to Stave vs. McEvoy. And, it?ll be difficult for the new staff to ignore Stave?s experience-though McEvoy may be a better fit for the offense. I also will watch a receiving corps that needs some oomph.