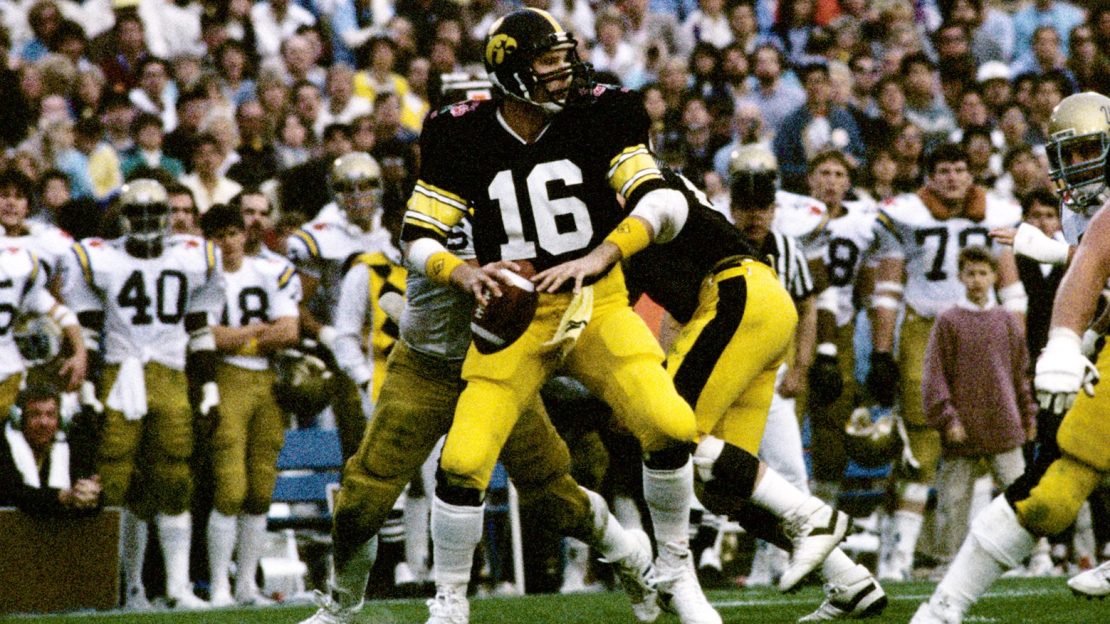 Iowa product Chuck Long has a long history in college football. He was a star quarterback at Iowa from 1981-85 who led the Hawkeyes to the Rose Bowl after the 1985 season, when Long also was runner-up to Auburn's Bo Jackson for the Heisman Trophy.

Long then was the No. 12 pick in the 1986 draft by the Lions, enjoying mixed results in the NFL. He later developed into a top college assistant, culminating with serving as offensive coordinator for Oklahoma from 2002-05. He then had a three-year stint as head coach of San Diego State from 2006-08. Long last coached from 2010-11, when he was offensive coordinator at Kansas.

Long began working the BTN last year and will serve in an expanded role this season, providing game and studio analysis. I caught up with him to get his impressions of the 2013 Big Ten season.

Q: Are you like everyone else, thinking it Ohio State?s league to lose?
A: I think it is. I think Ohio State with its dynamic quarterback Braxton Miller coming back, he?ll be the catalyst. I know they have to shore up their defense, but they?ll be a year into their system, so defensively I think they?ll be better. I believe they?ll have a chance to win it all and possibly play for the national championship.

But I don?t see them going undefeated. I see them getting upset along the way. That Michigan game could upset everything, title hopes and all. Back-to-back undefeated seasons are a tall order for anybody.

Q: Could Wisconsin push Ohio State in the Leaders?
A: I think so. That is the team that could challenge them. They are a threat. But it takes time for some adjustment, especially early in the year, with a new coach and the Badgers play at Ohio State in late September. Usually by nature, you don?t see the results of a new staff until later in the year. But Wisconsin still has a Barry Alvarez philosophy and a foundation that has been built by him and handed to Bret Bielema and now handed to Gary Andersen. That will help Wisconsin. I don?t see them losing too much momentum.

Q: Urban Meyer went 12-0 at Utah in his second year; he won a national title at Florida in his second year. He?s in his second year in Columbus. Could he have more Year Two magic in 2013?
A: Urban has always succeeded fast. But his first year, he didn?t go unbeaten in those places. He has awakened everyone up. He?ll have a lot more people aiming for him from a mental standpoint. Opponents will think: If we can beat Ohio State, it will be a feather in our hat. He?ll have them all coming hard at him. The issue is the mental issue. You have a team that went unbeaten last year. He has a big coaching challenge ahead of him. He has to coach his team to win; not to play not to lose. When you have gone unbeaten the year before, you have a tendency to play not to lose. He has to fight that, getting them to keep playing like they did last year.

Q: Who will win the Legends?
A: That?s a tough one, with Michigan, Nebraska, Michigan State, Northwestern. It seems everyone is picking Michigan. But there is something that?s pulling me back from Michigan. I think Devin Gardner will be a good quarterback. I think he has a chance to be really good. I look at Michigan State, and I see a very good defense. And Andrew Maxwell is coming back. ?

I?m going to go with Michigan State. I think they will have a chip on their shoulder after going 7-6 last season. They are my dark horse. I think Maxwell will have a better year.

I like Northwestern, too, with Kain Colter. ? I just don?t know if they have enough horses. It?s always a depth issue for Northwestern. They are coming off a great bowl victory. They have a lot of juice going into the year. Still, Michigan State is my pick.

Q: How will Iowa do?
A: It?s a critical season. The important thing this year is a better mesh between what Kirk Ferentz wants and what (offensive coordinator) Greg Davis wants. They have to mesh better to get that offense on track. I believe they probably worked those kinks out in the offseason and spring. Kirk has been a two-back, power-offense guy and Greg Davis has been a one-back, spread guy. Greg probably realizes he doesn?t have the speed that he had at Texas (where he was offensive coordinator).

This is a critical year. Another 4-8 season may have people talking loud. I hope that doesn?t happen. The boosters and fans may be at a higher pitch, just put it that way.

Q: Do you think the Iowa offense will be better?
A: They hired Bobby Kennedy to coach receivers who Davis worked with at Texas. It?s always better for coordinators to have at least one person that he knows from his career. Kirk recognized that and did something about it. When you are a coordinator going into a cold room, you don?t have anyone who shares your philosophy in that room. It?s tough. Everyone has an answer and has their answer and it may not jibe with what you want. Having Bobby Kennedy will help Greg Davis.

Q: You have taken over a program at San Diego State. What advice would you give new Purdue coach Darrell Hazell?
A: He has to stay connected to the field of play. In my first year at San Diego State, 80 percent of the stuff I did wasn?t football related. That first year, you have a tendency to look at all the other stuff in the program outside of the field, which takes a lot of your time to get straight. He?ll have more support at a Purdue than I had at San Diego State. He has to be able to delegate in non-football matters. His director of football operations is a key guy. Darrell will be OK. He has done this before at Kent State.