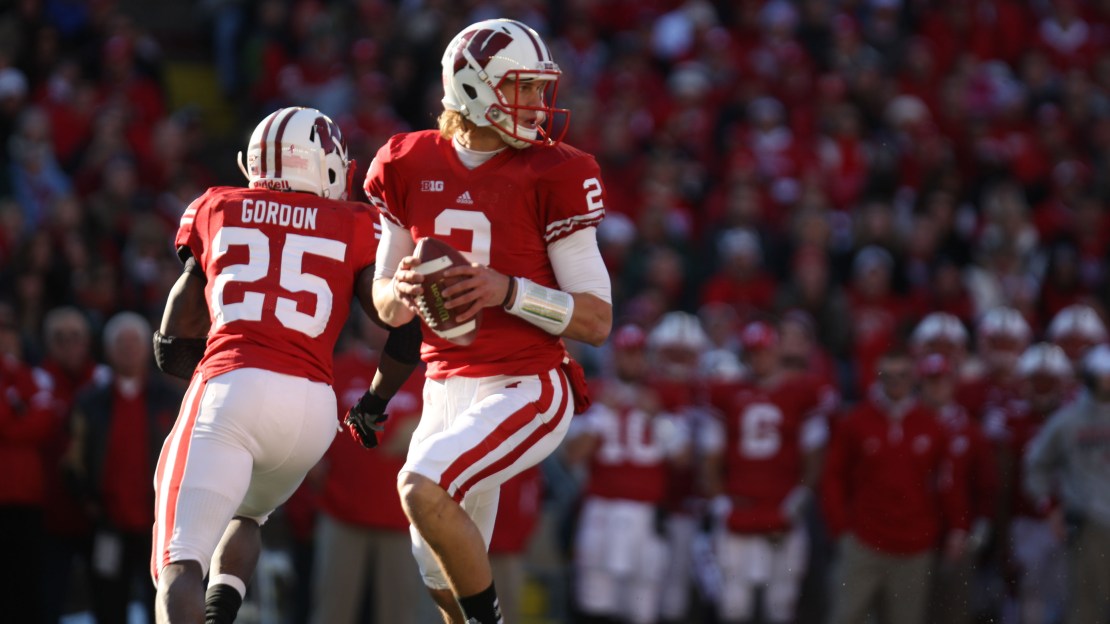 Whether you agree or disagree with the three-game suspension of Ohio State RB Carlos Hyde, check out the video footage from the altercation that got him in trouble.

A big lesson here: Avoid potentially bad situations. And always remember what your dad told you: Nothing good ever happens late at night. Just go home.

KEEP AN EYE ON KALIS: There is a lot to like about Michigan?s offense. But one area of concern is the interior of the line, where there will be two new guards and a center. One of the guards will be Kyle Kalis, who almost played last season as a true freshman. Yes, he was that good.

No freshman o-lineman had done that at Michigan since Justin Boren in 2006. Alas, Kalis was redshirted. Now, he?s ready to dominate.

BADGERS SIGNAL-CALLER? Who is gonna seize the quarterback spot at Wisconsin? If it was up to me, I?d go with Joel Stave.

But I am intrigued by JC transfer Tanner McEvoy. Whoever wins the post must improve a moribund passing game. Wisconsin ranked No. 111 among 120 teams nationally in passing with an average of 156.9 yards per game in 2012, the lowest at the school since the 1999 Rose Bowl team averaged 141.8 when quarterback Brooks Bollinger was a redshirt freshman and tailback Ron Dayne won the Heisman Trophy.

RANKING B1G QBS: Speaking of quarterbacks, here is a ranking of the Big Ten?s by Joe Christensen of the Minneapolis Star Tribune.

Burkland was projected on the preseason depth chart as a backup at right tackle behind Fou Fonoti, who suffered a season-ending injury last year that allowed Burkland to take over as a starter.

So, here is how MSU?s o-line figures to line up, according to Joe Rexrode of the Detroit Free Press: Dan France is back as the No.1 left tackle for camp, which starts Saturday, and Fonoti is the No.1 right tackle. Jack Allen will start camp as the No.1 right guard, with Travis Jackson at center and Blake Treadwell at left guard.

IT'S FRUECHTE TIME: With Devin Crawford-Tufts off the team, Minnesota needs Isaac Fruechte to step up at wideout.

He?s bigger, faster and dialed in. The Gophers need a big-play guy on the perimeter.

BELIEVING IN BUCKEYES: Lee Barfknecht of the Omaha World-Herald offers more validation of why Ohio State is a legit national title contender-as if you needed more.

NEXT MICHIGAN STAR WR? Remember when Michigan always used to have a big stud receiver? You know, guys like David Terrell, Braylon Edwards and Anthony Carter-among others. But, it has been a while. Well, the Wolverines may have their next star in Amara Darboh, who Devin Gardner thinks will be an All-American.

QUESTIONS FOR CREAN: It?s never too early to start thinking about basketball, right? Well, the great Bob Kravitz of the Indianapolis Star has a nice Q&A on how Tom Crean is scrutinizing his 2013-14 team.

Here is another reason for fans of Nebraska basketball to be stoked: The school officially added a rare prized recruit when the NCAA certified New Zealand guard Tai Webster for immediate eligibility.

?That?s a huge coup for the Cornhuskers,? ESPN basketball analyst Fran Fraschilla told the Omaha World Herald. ?If Tai Webster were in Chicago or Detroit or Los Angeles, I?m not sure a youngster like this would have considered Nebraska at the top of his list. He?s a kid who would have been a top 50 high school player in the United States, if not even better.?

One of Fife?s most interesting revelations: ?Branden (Dawson) is an NBA player whether he can shoot or not. Shooting can obviously add to his versatility and repertoire, but we think Branden can play at the next level whether he has a jumper or not.?

We shall see. I guess I beg to differ.

NATION'S BEST HOOPSTERS: The Big Lead recently ranked the nation?s top 50 hoopsters. And no Iowa Hawkeyes-Devyn Marble or Aaron White, in particular–were on the list. That has the great Mike Hlas of the Cedar Rapids Gazette a bit miffed.

Urban Meyer says Carlos Hyde will be suspended for ?at least? the first three games of the 2013 season. Is that enough?

My take: It?s probably too much. The guy wasn?t even charged and he still is suspended for three games? It seems a bit harsh.

My take: Good. Nebraska needs the former Purdue commit to be a pass-rushing force off the edge.

My take: Sounds about right. But I still like Nebraska in the Legends.

Friendly reminder U-M has deployed dynamic pricing this year. If you plan to purchase ND/Ohio State tickets, plan on dropping $200+ per.

My take: I feel for the common fan out there. This is a steep price.

My take on Manziel – I'm glad Paul Manziel is not my dad. Spawned a childish, ungrateful, entitled kid.

You can get a ticket to Justin Timberlake & JAY Z in Hershey cheaper than any #PSU non-conference game. That's mind boggling.

My take: I am speechless.