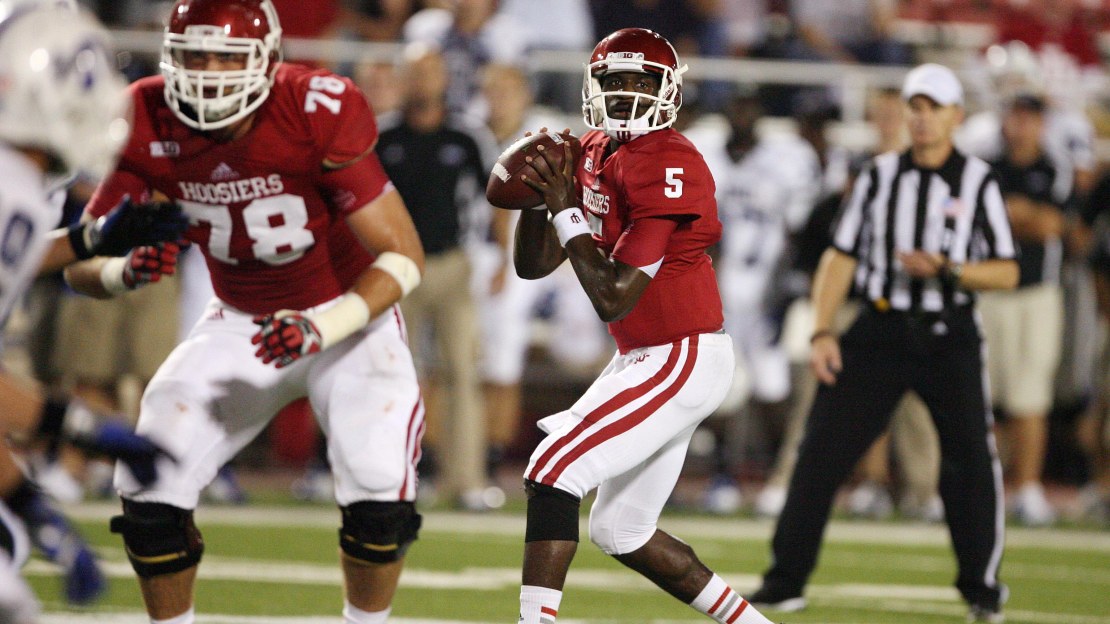 There are several Big Ten quarterback situations that are rock solid as teams enter training camp. Without a doubt, Braxton Miller will start for Ohio State; Taylor Martinez for Nebraska; Kain Colter for Northwestern; Devin Gardner for Michigan; Philip Nelson for Minnesota; and Nathan Scheelhaase for Illinois.

And Andrew Maxwell will begin as Michigan State?s starter, but he has a tenuous grip on the job. Who will win the other five jobs? Here are my predictions for Indiana, Iowa, Penn State, Purdue and Wisconsin.

INDIANA
Tre Roberson broke a leg vs. UMass last season in the second game of the season and missed the rest of the campaign. It was too bad, because he was on fire with 368 yards passing and 133 yards rushing in less than eight quarters of action. Cameron Coffman, who arrived in 2012 as a JC transfer, took over and excelled as the starter in the last 10 games. A junior, Coffman hit 60 percent of his passes for 2,734 yards with 15 touchdowns and 11 picks last season. Nathan Sudfeld also saw some action as a true freshman in 2012 and flashed some promise. He?s a big, strong passer.

My pick: Roberson. He continues to develop as a passer after becoming the first true freshman quarterback in Indiana history to start and just the second to play. In fact, the 6-0, 200-pound sophomore is underrated in the passing department. And he?s a much better athlete than Coffman or Sudfeld. Knowing all of that, Roberson has to be the guy. His combination of passing/running is as good as any quarterback in the Big Ten.

IOWA
The Hawkeye passing game was, well, a mess last year. How much did it struggle? Iowa had a Big Ten-low seven touchdown passes. The much-maligned James Vandenberg is gone. Now, Kirk Ferentz will choose between redshirt freshman C.J. Beathard, junior Cody Sokol (a JC transfer who redshirted) and sophomore Jake Rudock. None figure to make Iowa fans forget Chuck Long, but each has some talent.

My pick: Rudock. None of these guys has attempted a pass in a game. But the 6-3, 205-pound Rudock has been on campus the longest and is the best combination passer/athlete of the trio. A big key to success will be how well a much-maligned receiving corps develops for an offense that will work often at quick pace from a no-huddle scheme.

PENN STATE
This is a two-man derby between touted true freshman Christen Hackenberg and JC transfer Tyler Ferguson. Hackenberg arrives on campus amid massive hype and as one of the nation?s top-rated quarterbacks. He can make all the throws. Ferguson, who took part in spring drills, lacks Hackenberg?s skill set but is older and a bit more mature.

My pick: Hackenberg. Go with the more talented guy, the one who could become the new face of Penn State football. Making the decision to go with the true freshman easier is the fact the Nittany Lion offense is loaded with veteran talent at other positions, with a veteran line, deep collection of tight ends, wideout Allen Robinson and 1,000-yard back Zach Zwinak. Hackenberg will be ensconced with talent, meaning he won?t have to win games. He can facilitate as he learns and develops.

PURDUE
Way back in 2010, senior Rob Henry was Purdue?s starter. You can look it up. He started seven games. His results were middling, as Henry completed just 53 percent of his passes with eight touchdowns and seven interceptions and ran for 547 yards and four scores. A knee injury in training camp killed his 2011 season. And Henry played a bit last year. Now, he?s the most veteran option for first-year coach Darrell Hazell. Henry?s main competitor is true freshman Danny Etling, the jewel of Hazell?s first recruiting class who arrived in time to take part in spring drills. He impressed. Redshirt freshman Austin Appleby remains in the mix-slightly.

My pick: Etling. It may be best to opt for Henry. Not only is he the most veteran option, but he?s also the most athletic. And that athletic ability may come in handy working behind a spotty line for an offense that lacks proven playmakers at wideout and running back. Regardless, I say go with Etling. The future begins now. And Etling is the future. Build around the kid who could become Purdue?s next special quarterback.

WISCONSIN
The transfer of Danny O?Brien took one competitor out of this packed race. Still, this may be the most intriguing quarterback derby of all. There?s sixth-year senior Curt Phillips, sophomore Joel Stave, redshirt freshman Bart Houston and JC transfer Tanner McEvoy. The battle likely will boil down to Phillips vs. Stave. He took over for O?Brien in the third game in 2012 and started six games before suffering a broken collarbone and giving way to Phillips, who started the final five games with varying degrees of success. Houston has a nice arm. McEvoy is intriguing, a JC transfer who inked with South Carolina coming out of high school. His skill set appears to be ideal for Gary Andersen?s offense.

My pick: Stave. He doesn?t have the best arm, speed or athletic ability among the competitors, but he?s the best total package. And Stave?s experience is key for an offense that needs to augment a passing game that ranked last (111th in the nation) in passing in 2012. But keep an eye on McEvoy, who picked Wisconsin over Florida, Oregon and West Virginia. That should tell you how good he is. If he picks things up quickly, McEvoy could be a factor, but Stave is the best bet for now. Phillips? He just can?t pass. Remember the Rose Bowl?