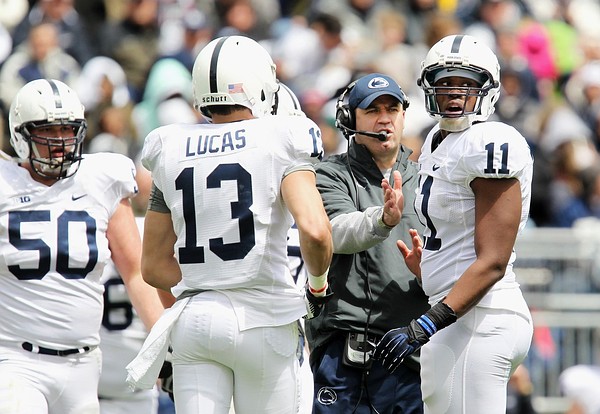 Bill O?Brien surprised many by debuting with an 8-4 record. In fact, he went 8-2 over the last 10 games after an 0-2 start. The Nittany Lions still are dealing with severe scholarship sanctions because of NCAA probation, which will threaten to compromise the team?s thin depth. Still, the front-line talent is top-notch; and if it stays healthy, this could be another successful season in State College.

Best case: Let?s pencil-in a 4-0 start, with no true road games in the four opening weeks. But the Nittany Lions will be pushed by visits from Central Florida and Kent State. Penn State opens Big Ten play at Indiana, which never has beaten the Nittany Lions. That skein will continue. Penn State will need the momentum and mojo of a 5-0 start as it welcomes Michigan and goes to Ohio State in consecutive games. Penn State lacks the overall talent to keep pace with these rising powers, but there?s no shame in that. PSU and Michigan haven?t met since 2010, but Penn State has won the last three meetings. Before that, Michigan ripped off nine victories in succession vs. Penn State. The Buckeyes have had Penn State?s number in recent years, too, winning eight of the last 11 meetings. The good news: The next three games are very winnable-Illinois; at Minnesota; Purdue. Even shorthanded, the Nittany Lions have more talent than any of those three clubs. That?s eight wins, matching last year?s win total. But the victories will end there, with games vs. Nebraska and at Wisconsin to end the season each resulting in losses. (The Nittany Lions are 0-2 vs. the Huskers since Nebraska joined the Big Ten. But know this: Penn State has won four of the last six meetings vs. a Wisconsin program that has gone to three Rose Bowls in a row.) Still, a repeat of last year?s 8-4 mark is a nice feat and worth celebrating, as Penn State continues to defy the odds.

Worst case: Syracuse is retooling with a new coach and Eastern Michigan may be the worst FBS program in the nation. So, a 2-0 start is a given. Visits from UCF and Kent State are more dangerous than they look. In fact, UCF is gonna leave State College with a win-like Ohio did last season. Yes, Penn State never has lost to Indiana; but this is a talented-and motivated-Hoosiers team that will ease years of pain by finally dumping the Nittany Lions. That will be the first of three losses in a row for Penn State, with a visit from Michigan next followed by a trip to Ohio State that will be ugly. Bill O?Brien is still hacked off at Tim Beckman for recruiting his players, so PSU rips Illinois like it did last year. But the Nittany Lions are ambushed on the road by an improving Minnesota club the next week. A visit from Purdue is just what the doctor ordered to follow up on the loss to the Golden Gophers. Penn State needs to savor the win over the rebuilding Boilermakers-because it will be their last. A visit from Nebraska-maybe the top team in the Legends Division-and season-ending junket to Wisconsin-revenge-minded after losing in overtime in State College last year–result in losses. A 5-7 season will be Penn State?s first losing mark since a 4-7 record in 2004.