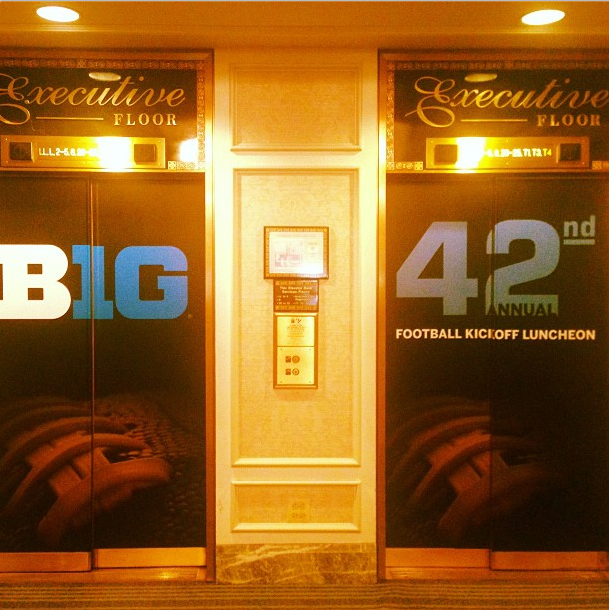 These are the type of days that my friends would kill to have my job. For two full days this week, I was able to go behind the scenes at Big Ten Football Media Days at the Chicago Hilton. Our BTN communications team spent time with the @BTNJourney crew, which interviewed all 12 Big Ten head coaches and the student-athletes that made the trip with them. Below is a picture with Ohio State?s Urban Meyer, who explained how he keeps his team focused. Our marketing team is creating a pretty cool TV spot for BTN that will air this fall. As part of the creative concept, the coaches diagram a sample play, walk us through its schematics and point out the keys to making it work. Even though they did it for the commercial, it was a unique opportunity to witness top-tier coaching first-hand. Here is a photo I snapped of Iowa?s Kirk Ferentz explaining an effective run play, often described as ?HB Sting.? On Thursday, BTN?s studio host Dave Revsine emceed the 42nd Annual Kickoff Luncheon. At 8 PM ET tonight, you can see highlights from the event, including the coaches? interviews (in groups of three), Commissioner Delany?s remarks and Dave, Gerry DiNardo and Howard Griffith breaking down the season. You?ll also hear the inspiring speech from Penn State offensive lineman John Urschel, and see the entertaining quarterback toss. Every year, the quarterbacks have to complete a pass to four randomly selected fans in the crowd. This year, the four quarterbacks were: Michigan?s Devin Gardner, Ohio State?s Braxton Miller, Nebraska?s Taylor Martinez and Illinois? Nathan Scheelhaase.